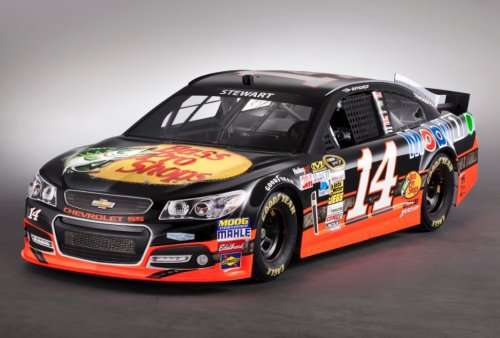 We have known for months that General Motors will be debuting a new model for the 2013 model year that would serve as a new performance car in showrooms around the country as well as a new name in NASCAR and today, the new 2013 Chevrolet SS debuted in stock car form – giving us our first hints as to what the upcoming road car should look like.
Advertisement

Up to this point, very little has been known in terms of what to expect from the 2013 Chevrolet SS shy of the fact that it will be based on the Holden VF Commodore but these first four images (shown in the gallery on the right) offer up some styling cues of the new high performance sedan. Along with the brief introduction of the 2013 Chevrolet SS NASCAR Sprint Cup race car, GM offered a shot of the new car in non-specific form sporting the number 13 for the 2013 NASCAR season along with a spread of new Chevy SS race cars including the cars Tony Stewart (shown above on the right in Bass Pro Shops trim), Jimmie Johnson, Jamie McMurrary and Kevin Harvick.

There is no question that the Chevrolet SS makes for a great looking stock car but these coupe-shaped race cars with a super short, sloping roofline are likely a far cry from the shape of the sedans slated for dealerships around the country. However, the front and rear ends of the race car along with some of the shapes along the side give us a good idea of what to expect from the production sedan based on the Holden Commodore.

“As a passionate race fan, the debut of the SS NASCAR race car is a genuinely exciting moment for me,” said GM North America President Mark Reuss. “With the SS, Chevrolet is delivering a true rear-wheel-drive NASCAR race car that is very closely linked to the performance sedan that will be available for sale, ensuring that our most loyal enthusiasts will have the opportunity to experience the same thrill every day on the open road that our race car drivers enjoy on the track on race day. The Chevrolet SS also demonstrates how we are able to leverage our global product portfolio to deliver a unique performance experience,” Reuss said. “The specialized development and testing work done for the race car will certainly benefit the entire Chevrolet product lineup.”

Across the front end of the 2013 Chevrolet SS NASCAR Sprint Cup car, we see a set of large headlights with an upper line that presents an angry, aggressive look with a projection HID assembly found towards the outside of the new front end. These large headlights are joined by fog lights and an LED driving light bar mounted in black bezels low and towards the outsides of the front fascia while a massive lower center grille opening allows for plenty of cooling air intake while bolstering the aggressive front countenance. We also see a wide, flat hood with dual scallops and a raised center section that meets a smaller upper grille opening with sharp lines settled where the sides of the car come up to meet the hood.

Out back, the 2013 Chevrolet SS Sprint Cup car wears a set of faux taillights that look a great deal like the dual lens units found on the current Chevrolet Malibu and the Chevrolet Camaro with clear lenses running along the bottom of each of these red lenses. Along the bottom of the rear end we see a set of fictitious dual exhaust tips that will likely adorn the buttocks of the production Chevy SS sedan along with the black cladding found around these exhaust tips.

Along the side of the 2013 Chevrolet SS race car, the fact that the NASCAR Sprint Cup car is shaped more like a 2-door coupe than a 4-door sedan leads us to believe that this is an area where there will be little resemblance between the race and road cars. However, while the race car probably has more exaggerated features, I would expect that the SS sport sedan will have similar bold wheel arches, a body line running through the middle of the doors and the front fender “vent” just behind the front wheels.

I would expect that when the 2013 Chevrolet SS road car arrives in showrooms around the country, the sides of the car will more closely resemble the Pontiac G8 with new side vents than the new NASCAR race car but the front and back end of this new stock car should look a great deal like the street legal sedan that is expected to do battle with the likes of the Dodge Charger.

The 2013 Chevrolet SS race car will make its debut at the Daytona Speedweeks next year leading up to the 2013 Daytona 500 while the production sport sedan is slated to arrive sometime in the first quarter of 2013.