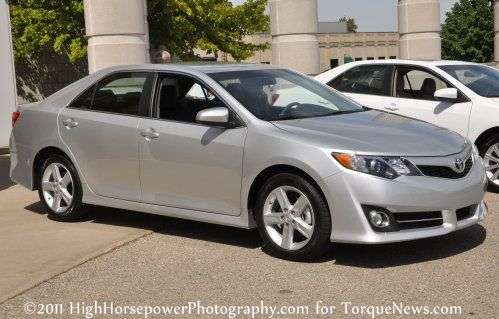 The 2012 Toyota Camry will introduce the Japanese automakers new Entune along with their Display Audio or HDD Navigation systems and today, Toyota announced that the new Camry will be the first Toyota vehicle to feature HD Radio Technology.
Advertisement

For those unfamiliar with HD Radio Technology, along with the exceptional sound quality of the high definition digital broadcast that will be pumped through the 2012 Toyota Camry’s optional JBL GreenEdge sound system, HD Radio also offers a variety of digital-only HD2, HD3 and HD4 radio stations. In many cases, popular local stations will offer an HD2 station with similar programming types while others go with totally different formats on their HD2, 3 or 4 stations but regardless of what type of programming is on the HD Radio stations – it increases the available station selection vastly with over 1,300 stations offering HD Radio channels that cannot be reached by a traditional radio receiver. I have had the pleasure of using the HD Radio system in a variety of Ford vehicles and it really does increase the number of available radio stations. In the Detroit area, most of the popular radio stations offer HD2 stations so when your favorite station goes to commercial, you can hop right over to the HD station to listen to similar music. Click here for a look at the channel selection for HD Radio Technology.

Along with offering the sound quality and huge selection of an HD Radio system, the 2012 Toyota Camry will also feature iTunes Tagging, which allows the driver or passengers to “tag” their favorite songs on the radio while driving. Once a song is tagged, it appears in the user’s iTunes program to make for easier purchasing to download it onto your computer, iPod, iPhone or iPad.

Toyota is the 19th automaker operating in the US to offer HD Radio Technology, joining Audi, Bentley, BMW, Ford, Hyundai, Jaguar, Kia, Land Rover, Lexus, Lincoln, Mercedes-Benz, MINI USA, Rolls-Royce, Scion, Subaru, Tesla, Volkswagen and Volvo. As you can see from that list, Toyota joins some of the industry’s most expensive brands as “every day” vehicles begin to add more and more items previously only offered in luxury models. HD Radio Technology information will begin arriving in Toyota dealerships starting in early October – around the same time when the 2012 Toyota Camry begins reaching those same showrooms.

Today’s announcement of the 2012 Toyota Camry doesn’t mention whether it will be standard across the entire lineup for standard for the higher priced models like the 2012 Camry SE and XLE, but with a steady stream of new information coming from the Japanese automaker, we should soon have a more information on the cost of the new high tech Toyota sound systems.

HDRadioFarce wrote on August 24, 2011 - 3:57pm Permalink
Does anyone realize that iBiquity and the automakers that offer HD Radio are under investigation for forcing this crap technology onto consumers, at their expense:

Elon Makes a Cybertruck Statement With an Action, But Quiet in Words
Tesla's Record Month in China: Doubled Registrations in March 2021
END_OF_DOCUMENT_TOKEN_TO_BE_REPLACED