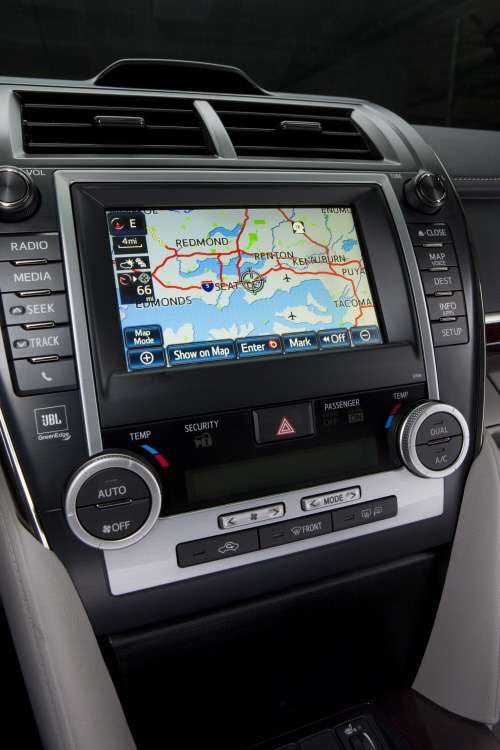 Toyota has a lot riding on the 2012 Camry, and it's confident that America's best-selling car will live up to its enormous build-up. What's the big deal? The Camry has been the top seller for 13 of the past 14 years in the United States.
Advertisement

The Japanese carmaker introduced the 2012 Camry today simultaneously in Detroit, Los Angeles and Georgetown, Ky., as well as to an Internet audience of an untold size. There were big smiles and happy faces all around as Toyota executives and the actors they hired assured themselves the "Reinvented Camry" of 2012 would be a big hit, as 7,000 auto workers at the plant in Kentucky that assembles the car roared their approval.

Bob Carter, Toyota general manager, gave a flawless, fact-packed speech from California in lauding the all-new Camry, which enters its seventh generation as an American car.

Carter and others from Toyota were a little over the top in praising the car as an American car. In this Buy American environment, it is understandable that Toyota promote the fact that 6.7 million Camrys have been assembled by Americans in Georgetown, and that 80% of the content of the car has American parts. But is that really the story here? It's such a rudimentary thing to be telling us on Game Day.

The story we expected was that Toyota was going to lift the black smock off of the 2012 and show us something bold, something expressive, something innovative, to keep the Camry on top by rocking our world with something so terrific we'd want to just spit with excitement.

Instead, in suburban Dearborn west of Detroit there was only boring old talk of new sheet metal and more roominess without explaining how that is possible on a car whose dimensions are essentially unchanged.

When the punchline passed, we got the nuts and bolts: That the Camry starts arriving in showrooms Oct. 3 and, by the way, an ad campaign begins Oct. 17 and runs through the Super Bowl, though we aren't going to be told what the campaign will say. The 2012 Camry comes in numerous trim levels. It will range in price from the $21,985 L to the $27,400 XLE.

There was some boasting, about the Camry being in Victory Lane 100 or more times at NASCAR races these past five years. That is impressive. And as you'll note in TN Managing Editor Patrick Rall's story, the Camry is the pace car for the Daytona 500 in February.

And while that is exciting, it won't translate into more sales. I expected the new Camry to knock my socks off. It didn't. It's an OK car, but the styling is neither bold nor expressive nor interesting in any way. It's as Everyday Joe as it gets. Maybe that's why 90% of all the Camrys made are still on the road. Because they are dependable and not flashy.

This 2012 Camry might prove to be the kind of car you marry (buy), but it certainly is not a four-wheel work of art that will sweep you off your feet or take your breath away. Not by a long shot.

Orange County T... wrote on August 30, 2011 - 12:16pm Permalink
From what I read the cargo space is a bit roomier than the 2011 Toyota Camry. The trunk is also a bit bigger and mpg has been improved; mileage stands at 35mpg and there is also a hybrid version that gets around 41mpg. Pricing for the new model will cost $200 less than the current version.