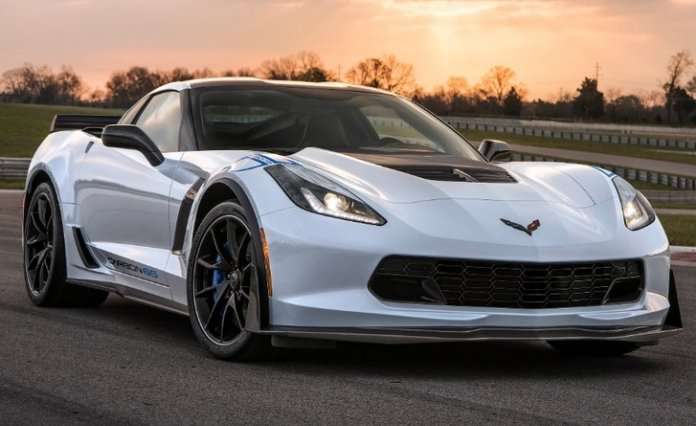 General Motors has announced that the first 2018 Chevrolet Corvette Carbon 65 Edition Z06 coupe to come off of the assembly line will be sold at the Barrett Jackson Auto Auction, with the proceeds going to the George W. Bush Presidential Center’s Military Service Initiative – a charitable organization which helps post-9/11 service members adjust to life after the military.
Advertisement

The Chevrolet Corvette is arguably the most legendary car in the history of the American automotive and later this year, the first-built example of the Carbon 65 Edition Z06 coupe will be auctioned off to benefit the George W. Bush Presidential Center’s Military Service Initiative. To be more specific, 2018 Corvette Carbon 65 Z06 Coupe VIN #001 will roll onto the Barrett Jackson Auto Auction stage in Scottsdale, Arizona on January 20th, 2018 at 4:30 Pacific, giving everyone (who has lots of money) a chance to buy an amazing sports car while also helping an amazing charity.

A Corvette for Military Charity
General Motors is a proud supporter of the United States military, offering unique discounts to past and present soldiers while also employing some 6,000 veterans right now and recognizing more than 50,000 retired employees who served in some branch of the US Armed Forces.

GM’s latest support of the US military comes in the form of a vehicle donation, with the first production-version (this doesn’t count the test cars, preproduction show cars, etc) of the 2018 Chevrolet Corvette Carbon 65 Edition Z06 Coupe being auctioned off at the Barrett Jackson Scottsdale event. The proceeds of that Corvette auction will go to the George W. Bush Presidential Center’s Military Service Initiative, and based on past examples of first-unit Corvettes being sold for charity – this car could easily fetch well into the six-figure range. Really, an auction price in excess of $250,000 seems possible when you consider the vehicle in question and the charitable impact, with some recent Corvette charity auctions reaching up past the half-million dollar mark.

The George W. Bush Presidential Center’s Military Service Initiative focuses on providing transitional support to post-9/11 veterans as they get re-acclimated to civilian life. This includes long-term support of wounded veterans and their families, as well as employment education and services for soldiers fresh out of the service.

The video below features GM’s Mary Barra as she announces the program along with President George W. Bush, who drove the car being auctioned off before signing the center of the steering wheel.

Like all new Corvette Z06 models, this car is powered by the supercharged LT4, sending 650hp and 650lb-ft of torque to the rear wheels by means of an 8-speed automatic transmission. The Carbon 65 Edition is intended to celebrate the Corvette’s 65th birthday and it is only available on loaded models, so this Corvette s fitted with the 3LZ trim package for the new Z06.

On the inside, this package adds all of the premium features of the 3LZ Z06 as well as a Jet Black suede-wrapped interior with blue stitching, a carbon-fiber steering wheel rim with gloss carbon-fiber interior trim, the Competition Sport seats and the unique Carbon Edition sill plates.

Again, this car will be auctioned off on January 20th at 4:30pm PST, so if you have a half-million dollars laying around and you are looking to both buy a rare supercar AND contribute to military charity – your chance is only a few months away.