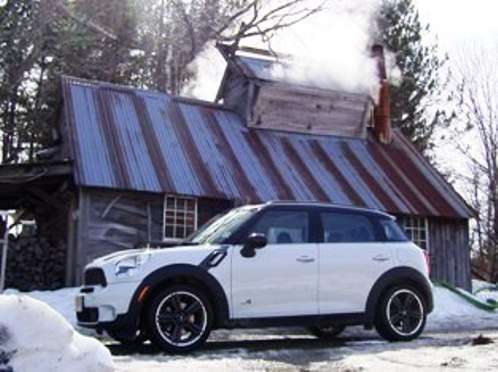 2011 MINI Countryman is all grown up now

Even though the MINI Countryman is a brand-new model it’s easily identified as a MINI. Countryman carries on MINI’s design characteristics with a larger body, greater ground clearance, four doors and all-wheel drive.
Advertisement

MINI’s familiar design characteristic such as the roofline, hexagonal grille, large headlights integrated in the hood, prominent wheel arches and upright rear light clusters continue to preserve the unique image so typical of a MINI.

Measuring 161.3 inches in length, with a wheelbase of 102.2 inches, the Countryman has an interior that offers more space and functionality. With its extra ground clearance and an elevated seating position Countryman moves a bit closer to a modern crossover vehicle.

The interior has been redesigned to include a new center rail system that extends from the front to the rear replacing the conventional center console. It offers flexible clip-in elements so you can divide the storage spaces individually as required. The holders and storage bins can be moved forwards and backwards to any desired position.

Popular electronic devices such as a mobile phone or an MP3 player can be attached to the center rail, and are automatically connected to the car’s on-board network and into the entertainment system. The toggle switches for various car functions typical of MINI are housed in the center console.

Countryman comes with supportive bucket seats with designs specific to a particular model. Sports seats are standard on the MINI Cooper S Countryman and offer two combinations of cloth/leather seating. Several choices of all-leather upholstery are available as an option. The top-of-the-line Lounge Leather upholstery is reminiscent of classy leather seats in a classic British car.

The elevated seating position improves comfort and the driver’s all-round view. The MINI logo on the rear has a specific function. Pressing the inner circle on the logo releases the rear lid that is hinged at the top for easy access to the cargo area. With the rear seat backs folded down, cargo capacity increases to a generous 41.0 cubic feet, enough for two mountain bikes with their front wheels removed.

And for those who need more space to carry their adventure gear, a standard low-profile roof rail system provides the ability to add a full line of MINI accessories.

Ambient lightning creates special color highlights throughout the cabin, giving the interior a unique atmosphere at night. Using a toggle switch, you can fade the color of the light from a warm orange to a sporting blue. Light rods also provide the color desired on the MINI center rail, making it easier to find things when it’s dark.

Optional interior colors make it easy to customize the interior, creating different color effects on the door panels, the center armrest side panels, the lower section of the B-pillar covers, and the inserts on the center rail.

Countryman offers a choice of two engines. The 1.6-liter four-cylinder gasoline engine in the Cooper is rated at 120 hp and 118 ft.-lbs. That’s enough to propel the Cooper from 0 to 60 mph in about 10 seconds. The Cooper S adds a twin-scroll turbocharger and direct fuel injection, boosting engine output to 180 hp and 177 lb.-lbs of torque, making it possible to sprint from a stop to 60 mph in about 7 seconds.

Both Countryman engines come with fully variable valve management. This technology is based on the VALVETRONIC valve management system featured in BMW engines. This optimizes engine response and serves to significantly reduce both fuel consumption and emissions. Valve management adjusts the lift and duration of the intake valves as determined by the level of power required.

The MINI Cooper S Countryman is the first MINI to offer a permanent all-wheel-drive system. Known as ALL4, it uses an electro-hydraulic differential to proportion the power distribution from front to rear in an infinitely-variable process. Under normal driving conditions, up to 50 percent of the engine’s power goes to the rear wheels and under extreme conditions up to 100 percent.

With ALL4, a unique driveline setup is used. Together with the specific mounting for the final drive and individual driveshafts, a vibration damper inside the rear driveshaft gives the ALL4 version of Countryman the same acoustic and dynamic feel as models with front-wheel drive.

Just like its MINI siblings, the Countryman is a joy to drive. Steering and handling are “go cart-like” making a romp on twisty mountain roads real fun. Even with its run-flat tires, the ride quality is reasonably good. The 6-speed manual transmission’s gear ratios are nicely matched to the torque characteristics of the S-engine, making running through the gears almost effortless. On a stretch of unpaved, ice-covered road four-wheel drive proved to be a real asset.

A total of six airbags are standard, with front and side airbags as well as side curtain airbags for both front and rear occupants. Three-point inertia-reel seat belts with belt-tensioners are present on all four seats. Belt force limiters up front, as well as LATCH child seat fastenings at the rear all come as standard equipment.

Also standard are stability control and traction control for the front axle differential. All Countryman models are equipped with 205/50 R17 runflat tires. Available optionally are 18’’ alloy wheels with runflat tires and 19” wheels can be ordered as a dealer-installed accessory
.
Standard features also include a multi-function steering wheel with cruise control, the MINI center rail, and a premium six-speaker audio system complete with a CD player and auxiliary input.

A wide range of options and special equipment tailored to each model comes with features such as high-end audio and navigation systems as well as mobile telephone interfaces including an Apple iPhone and other smartphones.

Other options include the dual-pane panoramic sunroof, adaptive Xenon headlights, lightweight-alloy wheels ranging in size from 17 to 18 inches, sports suspension (which lowers the car by almost 0.4″), as well as the wide range of John Cooper Works performance components.

As the fourth model within the MINI lineup, the MINI Countryman is a pioneer in many respects. It opens up that characteristic MINI feeling to a segment with greater demands in terms of space available, diversity and motoring comfort.