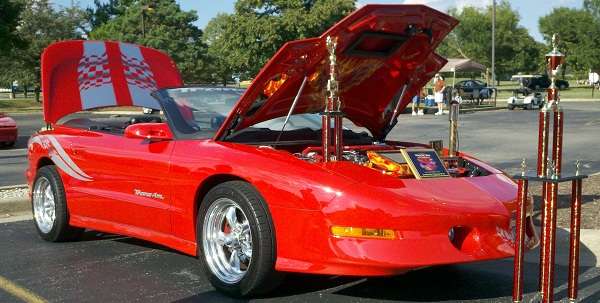 After we sold our restaurant to pay the medical bill for our son's leukemia treatment, I used the leftover money to buy this custom 1995 Pontiac Trans Am Convertible for my wife as a gift for her greatness as a mother.
Advertisement

We purchased this Custom 1995 Pontiac Trans Am Convertible on October 31st 2009. Before this vehicle we had owned a small pizza restaurant for 5 years and in October of 2008 our youngest son was diagnosed with leukemia.

So a year later we decided to sell the pizza place and pay off all the medical bills and the money that was left I told my wife I would buy her a Trans Am for all the things she had done to take care of our son and keep the household and restaurant running during his illness. She is very picky about what type of car she wanted and after showing her thousands of pictures on ebay she found the one she wanted.

It was located in Raleigh North Carolina. After several conversations with the owner of the car my wife and I decided to purchase one way plane tickets to North Carolina.

The owner picked us up and drove us 2 hours from the airport to his house and we looked at the car and purchased it. There was a big amount of trust involved on both sides, but it all worked out well. He trusted us and we trusted the guy we were buying the Pontiac from. We drove 10 hours all the way home.

When we purchased this custom 1995 Pontiac it was just plain until me and my small car cleaning and accessory shop Joe's Wash & Wax began modifying & customizing it.

The car's front seats are replaced with 2002 collectors edition leather with embroidered headrests. Door panel inserts were also changed to red. It has a full competition sound system with mirrored plexiglass sub enclosure in the trunk. The heart of the beast is a mildly built 355 with an Lt4 Hottcam kit. Under the Ram air hood is a custom airbrushed mural. The airbox is airbrushed with custom true fire flames in House of Kolors paints. There is also lots of chrome, polished, and mirrored accessories under the hood.

This custom 1995 Pontiac Trans Am Convertible has won many awards since it was completed. In 2011 It won Best of the Best Winners Cirlce at the Trans Am Nationals show in Dayton Ohio along with Best of Show out of 400 Trans Am's at the annual Tipp City Cruise in that is part of the Trans Am National Show. The car was chosen by a Gentleman that was here from Australia to be a part of the show so we feel that was a great compliment to the car. We have driven the car 7 hours to the Pontiacs in Pigeon Forge, TN show and received a first place trophy. This car is driven to all the relevant shows and has won over 40 first place and best of show awards.

We are the parents of 5 boys and enjoy spending our weekends throughout the summer at car shows.