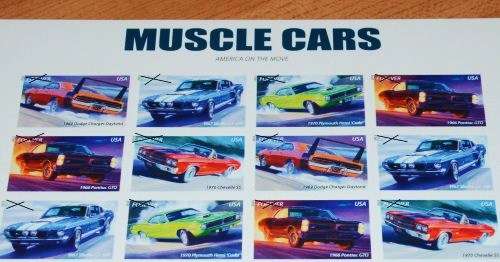 The United States Postal Service has just released their new Muscle Car stamps, with five legendary American muscle cars featured in the newest release of the “America on the Move” series - giving both automotive collectors and stamp collectors a reason to rush out to their local post office this morning.
Advertisement

Included in the new Muscle Car collection from the third installation of the America on the Move Series is the 1969 Dodge Charger Daytona, the 1966 Pontiac GTO, the 1967 Ford Shelby GT500 Mustang, the 1970 Chevelle SS Convertible and the 1970 Plymouth Hemi 'Cuda. Appropriately, all of these five American muscle cars are depicted in the stamps doing big, smokey burnouts. Also, all of these cars are shown in exterior colors that harken back to the classic muscle car era with shades like Hemi Orange on the Dodge Charger Daytona, Lime Light Green on the Hemi Cuda, Guardsman Blue on the GT500 and a simple bright red on the Chevelle Convertible.

These new Muscle Car stamps are “forever stamps”, which means that they will always have a usable value equal to that of a one ounce first class USPS stamp. Right now, that means that these stamps will cost you 46 cents per piece but as the cost of a first class, one ounce stamp goes up over the next few years – these Muscle Car stamps will increase in usable value. However, considering the limited nature and the collectability of these new America on the Move stamps, we can bet that they will be worth way more than a normal first class stamp in the coming years.

The Muscle Car stamps are available in a variety of packages including a block of five stamps that costs $2.30, a block of ten stamps that costs $4.60 or a sheet of twenty stamps that costs $9.20. Those sheets with twenty stamps come with a embossed blue header proclaiming the Muscle Car issuance which, I know from firsthand experience, looks great in a frame. For those more serious stamp collectors, there is a press sheet for $92.00 that has ten sheets of twenty stamps on an uncut sheet and you can purchase that from USPS.com. There is also a package that includes five envelopes with one of each stamps with a decorative postmark from the day of issuance for $4.50 or for $17.95, you can get those five postmarked, stamped envelopes along with a sheet of twenty muscle car stamps. Click here to visit the Muscle Cars page of USPS.com to order yours or head to your local post office to purchase these cool stamps in person. If you do want a set of these stamps for your own collection, I recommend that you do not delay as Ive been told by a postal worker that these are selling quickly and production numbers are limited - just like the amazing cars depicted on these new stamps.

The first issuance of the America on the Move Series was introduced in 2005 with the “50s Sporty Cars” collection which included the 1953 Chevrolet Corvette, the 1954 Kaiser Darrin, the 1952 Nash Healey, the 1953 Studebaker Starliner and the 1955 Ford Thunderbird. The second issuance came in 2008 with the release of the “50s Fins and Chrome” collection which included the 1959 Cadillac Eldorado, the 1957 Studebaker Golden Hawk, the 1957 Pontiac Safari, the 1957 Lincoln Premiere and the 1957 Chrysler 300C.

The image above on the right shows a portion of the Muscle Car stamp sheet that I purchased for my own collection this morning with the “forever” portion covered with a black X to prevent anyone from printing the images out and trying to pass them off as real.

Tre Deuce wrote on February 23, 2013 - 10:18pm Permalink
Kool! Wish I had known about the previous editions. I bet they are pricey now. Thanks... Patrick
Patrick Rall wrote on February 27, 2013 - 9:01pm Permalink
When I was doing some reading on those older releases, the USPS website still had some packages available via a search of their system. However, they were "collectors packs" with post cards and a book rather than sheeted stamps. If you search the USPS site for 50s Sporty Cars and 50s Fins and Chrome, lots of results come back and some of those link to online purchasing pages. Thanks for reading!
3Deuce27 wrote on February 28, 2013 - 2:48am Permalink
Put my orders in. Thanks Patrick,