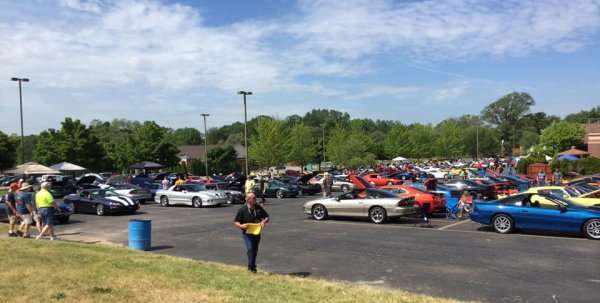 The annual MIFBody Meet and Greet is Milford, Michigan is the largest all-Camaro and Firebird show in the state of Michigan and this year’s event was a good one – with more than 250 cars, hundreds of spectators and over a thousand dollars raised for the Turning Point Charity in Mt Clemens, Michigan.
Advertisement

If you are not familiar with MIFBody.com, it is the online home base for the Michigan F-Body Association, which caters to all generations of the Chevrolet Camaro and the Pontiac Firebird. For each of the past 12 years, the growing crowd from MIFBody has gathered at Bakers of Milford for their annual meet and greet. This may have started off as a way for a local club to meet up once a year, but it has grown to an event that draws not just members of the group, but also car show fans from around the area. Bakers is known for their massive weekly Sunday car shows, so when they host unique events like the MIFBody.com Meet and Greet – the local car show fans flock to Bakers to see some of the best-looking Camaros and Firebirds in Michigan and surrounding states.

After dealing with rainy weather and frustrating road work for the 2015 show, 2016 was a much brighter day with clear skies and smooth sailing on the freshly-paved road leading to Bakers. The MIFBody crowd gathered with more than 250 Chevrolet Camaro and Pontiac Firebird models from the last 50 years, with representatives from each generation of GM’s legendary muscle cars.

Best of all, the event raised over a thousand dollars for the Turning Point Charity in Mt Clemens, Michigan – a group which helps to support victims of domestic violence. It was a great day with a great turnout for a great cause and for those who didn’t make it to the event, below you can find a rundown of the award winners for each of the classes and the overall show. Congratulations to Brian Meissen and the whole MIFBody.com group for putting on another great car show. As a Milford resident, I know that the folks from Bakers provide a great venue for car shows, but without dedicated organizers and attendees, shows like this wouldn't happen.

Click here to have a look at the images from the 12th annual MIFBody.com Meet and Greet at Bakers over on the official club Facebook page!