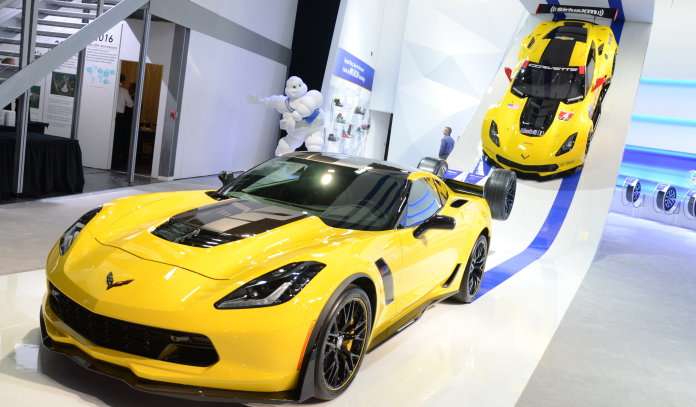 Here is a look at the General Motors vehicles included in Forza Motorsport 7, including a handful of Chevrolet Camaros, Chevrolet Corvettes and other legendary GM performance models.
Advertisement

We have already talked about the FCA/Chrysler and Ford Motor Company vehicles which will line the virtual showroom of Forza Motorsport 7 and today, we bring you the General Motors products coming to the next generation racing simulator – or, at least those GM vehicles which have been announced thus far. Turn 10 Studios, the company responsible for the remarkable Forza gaming series, has promised that there will be more than 700 vehicles on Forza 7 and so far, the company has announced 100 vehicles from American automakers.

Included in this initial list are 32 vehicles from GM brands past and present, and as you might expect, the Chevrolet Camaro and Corvette are the most prevalent models, but there are several options for Pontiac fans, Cadillac V-Series fans and lovers of the more obscure GM performance vehicles.

Here is a look at the 32 GM cars, vans and SUVs coming to Forza Motorsport 7.

Vans and SUVs
While Forza Motorsport 7 will best feature low-slung sports cars as they rocket around famous road courses around the world, FM7 will include races for trucks, vans and SUVs. The initial FM7 vehicle list doesn’t include any GM trucks, but there is a van and and 2 SUVs – the 1983 GMC Vandura, the 2006 Hummer H1 Alpha and the 2012 Cadillac Escalade ESV.

Classic Buick Muscle
There are no modern Buick models included in FM7 (so far), but the new racing simulator will include a pair of classic Buick muscle cars – the 1970 Buick GSX and the 1987 Buick Regal GNX.

Cadillac Brings Luxury Performance and a Limo
As mentioned above, the Cadillac Escalade ESV is included in the first FM7 vehicle list, but there are also 3 key Caddy performance cars – the 2011 CTS-V coupe, the 2016 ATS-V and the 2016 CTS-V – along with the 2013 XTS Limo. Honestly, I am not real sure why the limo is included in the game, but it has made for some amusing videos online.

Chevrolet Packs Big Performance
Finally, the most populous brand from General Motors on the initial Forza 7 vehicle list is Chevrolet, which has 17 models on this first list. As you might expect, the Camaro and Corvette are the most common Chevy cars on the list with 7 examples of the muscle car and 5 examples of the original American sports car. This includes the new Camaro ZL1 and the new Corvette Z06 (shown above, front), so in addition to some classic models, the most track-capable Chevy models are available in FM7.

In addition to the Camaros and Corvettes, FM7 will also have some other popular Chevrolet models, including the 1970 Chevelle SS, the 1970 El Camno SS, the 1971 Vega GT, the 1988 Monte Carlo SS and the late model Chevrolet SS high performance sedan.

Other GM Products Could Arrive Later
While there is a generous collection of past and present GM performance vehicles (and non-performance vehicles), there are several models which we should expect – which are not on the initial list.

There is no 1st generation Camaro or 1st generation Corvette, both of which I fully expect to see on FM7. Also, since Forza 7 is a racing simulator, I would expect to see some actual race cars, while all of the cars on this initial list are production road cars. If nothing else, the C6 and C7 Corvette LeMans race cars (shown above, rear) seem like a perfect fit for FM7 and perhaps we will see a Cadillac race car as well.

Forza Motorsport 7 hits stores this October for Xbox One. In the meantime, check out the initial list of GM vehicles below and if you are interested in some of the other American cars in FM7,
click here for the FCA/Chrysler vehicles.