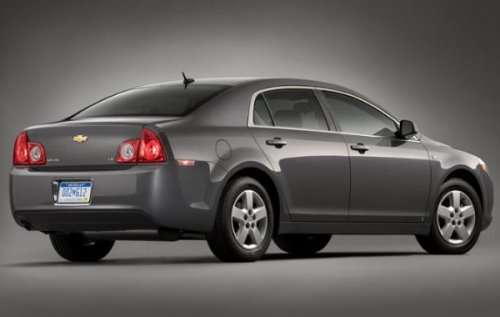 General Motors and the National Highway Traffic Safety Administration have announced a recall of over 426,000 midsized sedans including the Chevrolet Malibu, Saturn Aura and Pontiac G6 sedans over a concern that a component inside the automatic transmission could fail – possibly making it impossible to restart or even allowing the vehicle to roll away when the vehicle is parked.
Advertisement

This new General Motors transmission recall affects the 2007 through 2010 Saturn Aura along with the Chevrolet Malibu and the Pontiac G6 from the 2008 through 2010 model years; all of which are equipped with a 4-speed automatic transmission. In total, 426,240 vehicles in the United States are included in this fresh recall.

In these 426,240 GM midsized sedans, the 4-speed automatic transmission shift cable has “tabs” that may fracture and separate. Should that happen, the shifting system will not have proper control over the actual shifting action of the transmission and that can cause the interior shifter to display a certain gear while the transmission may not actually be in that gear. Say that you are driving your Chevy Malibu, Pontiac G6 or Saturn Aura and when you come to the end of your drive – shifting your GM sedan into park – and the tabs on the shift cable break. While the interior shifter will indicate that the car is in Park, the separation of the shift cable may have left the sedan in some other gear such as Drive, Neutral or Reverse. If the vehicle is left in a driving gear or neutral and it is parked on a slope, there is a chance that the car could roll away and strike other vehicles (moving or parked) or worse, it could strike an unsuspecting pedestrian. Because of that risk of injury or accident, GM and the NHTSA have made the call to get these sedans back to dealerships for preventative repairs.

In addition to offering a safety risk, the shift cable problem at fault for this new GM transmission recall can prove to be quite a headache even if the Malibu, G6 or Aura doesn’t roll away. When the driver moves the shifter into the Park position, the ignition will allow the key to be turned off and removed even though the car is not in Park. However, should the transmission actually be in Drive or Reverse due to a disconnected shift cable – the car will not start.

The problem with this type of recall is that even though it doesn’t pose any sort of risk while driving, it could happen at any time without any warning and there is no real way for an own to investigate the issue him or herself. Based on that, those drivers who own a 2007-2010 Saturn Aura or a Chevy Malibu/Pontiac G6 from 2008 through 2010 should act quickly once the recall formally begins.

General Motors has oddly not offered a schedule as to when they will begin notifying owners but when they do, those folks who drive these affected sedans will be asked to return to their local GM dealership where a technician will either install a retainer on the end of the shift cable or replace the shift cable altogether. OF course, this work will be done free of charge to the owner and for more information, owners can contact GM at 1-800-521-7300 (reference safety recall number 12106).