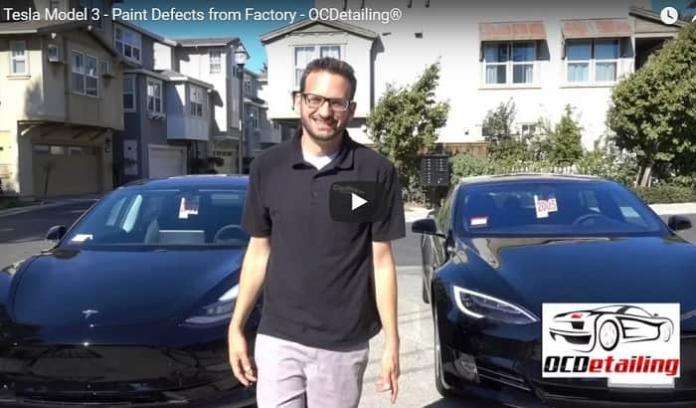 Video Shows Model 3, Model S Paint Defects From Factory, But Is This Really and Issue?

When you a brand new Tesla Model S or a Model 3 you don't expect a paint defect from factory. But apparently many new cars have them and only obsessively careful people can notice them.
Advertisement

While showing paint defects on these cars he says no matter how these cars cost, it's really not out of the ordinary to see factory defects on new cars. He says they even had Bentleys and Ferraris dropped off here on trucks, covered in plastic and with pain defects on them when they pulled the plastic. Torbati says "it's just not in manufacturers' budget usually to get the paint perfect."

The he proceeds showing the common paint defects on those two Tesla vehicles seen in this video. First of them is the paint defect on the black Tesla Model S. It's on the bumper and is a hologram type paint defect from factory.

Take a look for yourself and see if these are really issues.

You can watch the video here.

Is this too much attention to details? Yes and no. I think that is a good thing to have in someone who's job is this sort of detail work on your car. "His OCDness probably results in him doing good work," comments user Regenshire on Reddit.

Take the swirlmarks. Lambro comments in the same place.

If you have enough swirlmarks in the paint (especially if you wash it yourself and aren't careful with what you're using to wipe it down), you will absolutely have noticeable swirl marks in the clear coat. In fact, I'd say they're hard not to notice once you have seen them. I'm sure if some of these imperfections are present from the factory they're a little less noticeable, but in the video, at least, they're pretty easy to spot, especially in the sun.

Many brand new cars have these types of paint defects. It's an industry wide issue. But, on the other hand, on a car as expensive as as Tesla Model S, these defects should not be acceptable. Should they?

I have never seen a factory-new car that didn't have some paint issues. 99% of people would never notice or care. Consider, for example, this story by TorqueNews reporter Parks McCant titled Is it 'normal' to find a scratch on my just delivered 2016 Honda Civic? "Much can happen to a car transitioning from the assembly line to the dealership lot or showroom, on a train, and then a car transport. Birds, rocks and boneheads to name a few, with the occasional loading or unloading mishap. Infact, vehicles transferred by rail to a port of entry have been known to arrive missing a part or two. But generally, most cars arrive in stellar condition, are then detailed, spot serviced, and released for sale," McCants writes in that story.

What do you think? Are factory paint defects like this a real problem or something we should care much?