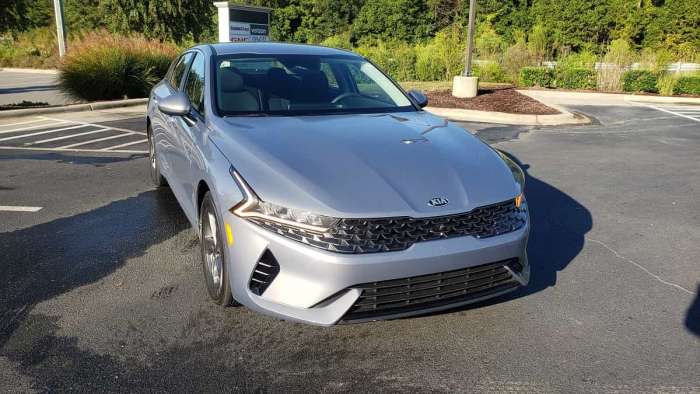 Kia is replacing the outgoing Optima with the 2021 K5 with a complete overhaul and aggressive design.
Advertisement

The 2021 Kia K5 will replace the Kia Optima within the range, which will allow Kia to better compete with the canons of the mid-size sedan segment.

Based on a completely new architecture that the manufacturer calls N3, the 2021 K5, which is Kia's this third-generation platform, offers a structure more resistant to collisions while reducing the net mass of the vehicle. Kia said that this modular architecture will support most of its future vehicles. 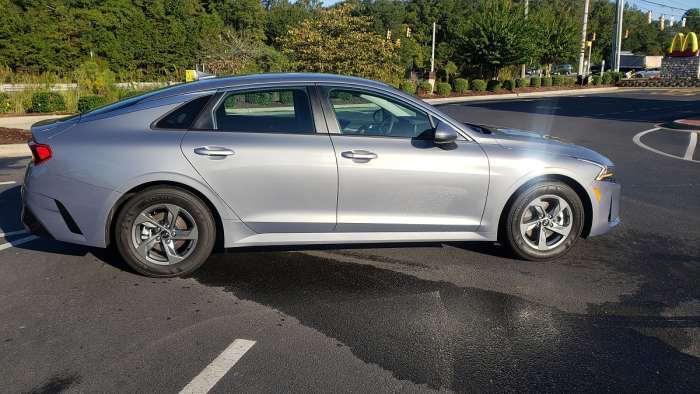 The 2021 Kia K5 has four trim levels, but comes in seven versions. Those are the LX, LXS, GT-Line, LXS AWD, EX, GT-line AWD and GT trims. The LXS version that I tested has 31 miles per gallon fuel economy. The city is 27 and the highway is 37 MPG.

All versions (except the GT) have a 1.6-liter T-GDi turbocharged four-cylinder engine developing 180 horsepower and 265 Nm of torque, paired with an all-new eight-speed automatic transmission with optional all-wheel drive.

The GT is equipped with a T-GDi of 290 hp and 422 Nm of torque, mated to an 8DCT eight-speed dual-clutch transmission, driving only the front wheels. 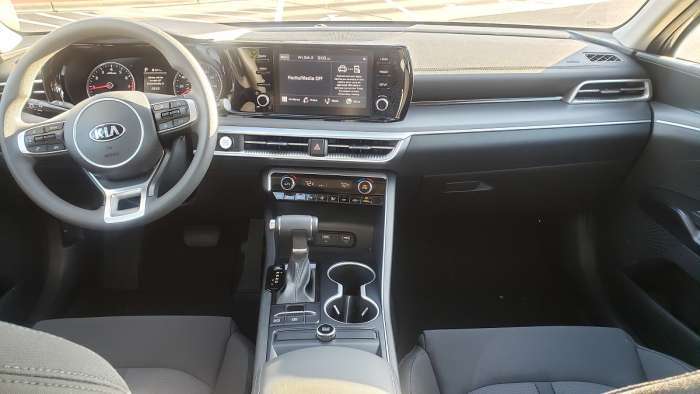 The new Kia K5 sports an angular style and a design of lights with a rather remarkable and distinguished LED signature. Compared to the Optima, the 2021 Kia K5 has also increased by approximately 5cm in length, 2.5cm in width and 4cm in wheelbase compared to its predecessors.

The automaker's press release states that this new sedan is longer, wider and lower than its predecessor, but the announced specifications reveal a sedan of almost identical proportions. Its total length goes from 4,855 to 4,905 millimeters.

Inside, there is an 8 ″ touchscreen with mirror-link function and optional satellite radio. Apple CarPlay and Android Auto are standard for the eight-inch display, while an optional 10.25-inch touchscreen adds a server-available navigation system with real-time traffic data, as well as a new Bluetooth multi-connection and connected user profiles.

With its design clearly more modern, angular and sophisticated, the Kia K5 2021 sports the new stylistic direction of the manufacturer. We notice the famous "tiger muzzle" used on other products of the brand as well as the new LED headlights of the "heartbeat" type hidden behind a domed hood.

At the rear, the K5 comes in a fastback style, drawing some resemblances to the Kia Stinger and incorporating a rear section that borrows some styling cues from the Hyundai Sonata. In short, it is a rather successful design.

The big surprise is the addition of all-wheel drive with the 2.5-liter turbo engine, which will allow the K5 to better compete with the sedans Nissan Altima, Toyota Camry and Subaru Legacy, which also offers it.

We, at Torque News, think Kia has come up with a very successful design and an interesting level of technology, good for its price. I think Kia could do better in terms of gas consumption. That said, we expect Kia to market a hybrid or even a plug-in hybrid versions of the 2021 K5 soon. If it does, it will allow this car to stand out even more.

Tesla-Funded Research Reveals One of The Biggest Mysteries of EV Battery
Tesla Tesla Buyer Nets a Whopping $12,000 Discount After Asking for Reduction
END_OF_DOCUMENT_TOKEN_TO_BE_REPLACED