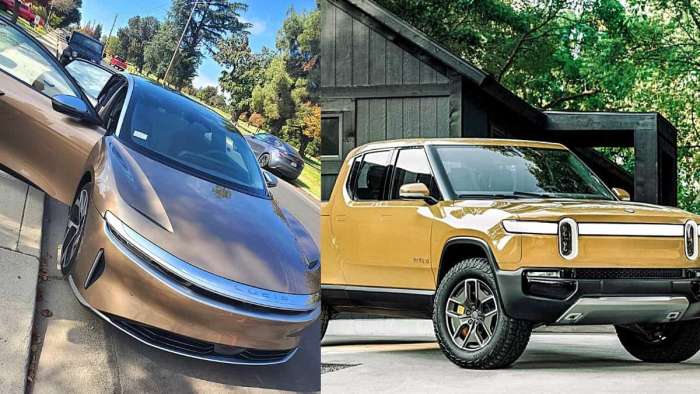 Rivian vs Lucid: The Potential In The Long Term

Who has more potential long term out of these two: Lucid or Rivian?
Advertisement

Until recently the major story, when it came to electric cars, was about Tesla. Suddenly, the narrative is changing and it's now Rivian vs Lucid Motors. Which of these do you think has the bigger potential in the long term? I asked this question at Torque News Youtube channel and got some very interesting answers, that I would like to share with you below.

Each paragraph below is a one separate opinion, a comment, resulted from our Rivian vs Lucid subway.

Lucid is a Tesla wannabe, but it has the 900-volt charging system with motor and batteries. No other company has that yet. A few have 800 V, for example Koenigsegg. Rivian is just a Tesla wannabe too. Tesla has sued them for stealing battery-tech etc. The pickup market is big in USA, but not globally.

Lucid Motors is making a sedan, the Lucid Air and has the maturity in its leadership. Rivian, on the other hand, is going to make a pickup (the Rivian R1T) and SUV. That seems smarted than going from sedan to SUV as it's not likely the 2 could share any parts. Also, not a fan of a Saudi backed company.

Lucid has potential for its battery and motor production, but Rivian has big backing and scalability with the adventure network.

"I just don’t see a huge market for $169,000 cars (Lucid Air Dream) and apparently Lucid's $79,000 car is a long ways off, comments Richard Wolf under Torque News' survey. He says, they are going to be burning cash for a long time. "I see Rivian having a chance to be more successful than Lucid," Wolf says.

"I think it is too early to speculate on where Lucid or Rivian will be in one, three or five years. The EV industry is in its infancy right now and a lot can happen during the next 5-10 years as other companies like GM, Ford, etc... maneuver and end up buying EV startups like Rivian or Lucid in an effort to stay relevant. I saw this happen many times over the past 45 years that I was in the computer industry. The EV industry seems to be something between the ICE automotive industry and the computer industry - especially when you look at what Tesla is doing," comments Thomas Ruwart under Torque News.

I don't know why Lucid started with the Air sedan. May be there is wisdom there as Tesla also started with the Model S. Even the ICE car makers know that 4 door sedans are not what people want to buy. The Truck and SUV is where the market demand is. Rivian caters to a broader market and their vehicles are half the price of a Lucid.

There is a thought that Rivian has first mover advantage on EV trucks and Lucid will get acquired, likely by Apple. Same attention to design quality. But what does Lucid do that Apple doesn't? They have a car assembly plant ,but the stock is insanely overvalued. I think Apple is likely to buy or partner with a dying legacy automaker. Do you remember that at one point recently Apple was in talks with Hyundai?

Why is everybody getting it so wrong on Lucid vs Rivian?

Lucid has proven that it will do much better in the long run because it has better proprietary drive train technology at the moment than every other EV company in the world. Rivian doesn't even make it's own motors! It uses 4 Bosch motors to produce 800+ horse power while Lucid produces 1100+ horsepower from 2 motors that it makes in house.

Lucid's battery packs have already been proven in Formula E racing. They can go 520 miles. Rivian is only able to go 314 miles with a bigger battery pack and that is insufficient for an off road pickup that is expected to tow,

Lucid beats everyone in charging speeds with 300 miles dc charging in 20 minutes, no one, not even Tesla comes close. With this technology, Lucid's Gravity pick up will kick Rivian's pick-up and SUV to the curb when it's released.

The only thing that may give one company advantage over the other is its ability to scale up production quickly. None of them has succeeded in this area yet.

Rivian may get help from Ford to scale up its production although it hasn't done that yet. Lucid's ceo is a veteran in car manufacturing and he moved from Tesla with 300 Tesla engineers. That could give it serious advantage in scaling up its production. I don't think Rivian will do better than Lucid in manufacturing.

Finally money is not going to be the deciding factor for who succeeds in the long run. This is purely a technology and manufacturing race. Both companies can raise any money that they want to finance their production. The company that would win is the one with the best technology and that is clearly Lucid for now.

Richard Wolf, who had commented above, responded to the above opinion and wrote, "But all this technology at a price few can afford isn’t going to do them any good. Neither for Lucid, nor for Rivian. However if they concentrated on selling their batteries and motors if indeed they have world world-class technology in these areas then they might have a chance.
Car manufacturing is very hard and margins can be razor thin then if you have recalls and lawsuits."

DeanMcManis wrote on November 18, 2021 - 1:36am Permalink
I don't agree that either Lucid or Rivian are Tesla wannabees. They would both welcome Tesla's market dominance, and future market potential. But even though people like to put every EV up against Tesla as the next "Tesla killer" that is ignoring the far bigger automotive market. Gas vehicles. Gas/diesel powered vehicles own 95% of the automotive market. And when I spoke with Lucid CEO Peter Rawlinson, he specifically said that they designed their Dream Air model to compete in the luxury automotive market. Meaning Mercedes Benz, BMW, Audi, Porsche, Jaguar. Likewise, Rivian is actually targeting the HUGE gas/diesel pickup truck market. Not just Ford's Lightning, but Ford's whole F150 line up, Chevy's Silverado, and Dodge's RAM pickup. Sure, these EV startups will most likely just get a bite out of this market, but that translates to hundreds of millions of dollars, if successful. To answer your question, I think that Lucid has a slightly better chance of making more sales and profits. They are the world's first EV pickup truck maker to hit the market, and they already have reservations for ton's of commercial trucks for Amazon and others. Lucid will offer their lower priced models that should compete well with the Mercedes EQS and E and S-class gas models. And Lucid also has a luxury crossover in the pipeline, and I can see them building less expensive future models. But Rivian's market is just much bigger. Sure, it will take some convincing to move traditional gas/diesel pickup owners to move to an unproven EV truck brand, and the Lightning and EV Silverado will be out soon enough. And the Cybertruck should follow in a year or so. But I do think that Rivian does have the best potential for growth and profit, outside of Tesla. I think that Lucid could best rival Jaguar, and Maserati as successful smaller automakers.
CAresident wrote on November 23, 2021 - 10:22pm Permalink
Lucid is great. You can’t really speculate on the future. Your doubting the engineers can pull off more than they already did? He’s making sure everything comes out perfectly. You don’t think he has the wits to pull it off again?? Pfftt
Stephen Anastasio wrote on November 18, 2021 - 7:20pm Permalink
I just bought 40 shares of Rivian, just hoping that being in partnership with Bezos will make this a monster company

LG's New EV Battery Plant Is a Welcome News for Tesla
Tesla Giga Berlin's New Hurdle: It's Not Only the Gov't, but Now Tesla Itself
END_OF_DOCUMENT_TOKEN_TO_BE_REPLACED