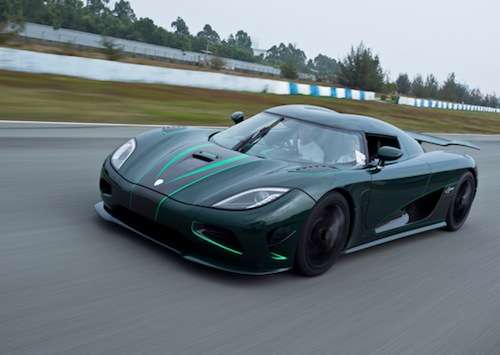 The 2014 Koenigsegg Agera S stands head and shoulders above any other independent brand and sets new benchmarks for performance and price.
Advertisement

When it comes to supercars, Christian von Koenigsegg knows how to set the road and track on fire. He has been been building supercars since 1994 and the 2014 Koenigsegg Agera S is the newest hypercar and a variation of the Agera R that came out in 2012. Koenigsegg uses the latest turbocharging technology and materials to extract every bit of power from the unique V8 powerplant that propels the Agera S to incredible speeds. Much of the 2014 Agera S is bespoke and built in-house at the Koenigsegg factory in Ängelholm, Sweden. The new hypercar has just been sold and sets a new record price tag in Singapore.

The Agera S is a true hypercar in every sense that sets new benchmarks when it comes to independent supercar automakers. The design is clean, aerodynamic and beautiful. The Agera name means “to take action” in Swedish, and is also short for the ancient Greek word Ageratos which means “ageless”. The new Agera S is perfectly named as the Swedish automaker moves into the future.

The Agera S is a two-door two-seater with a removable hardtop that stows under the front hood lid. The body of the hypercar is made from pre-impregnated carbon fiber/kevlar, and features lightweight sandwich reinforcements and carbon vents over the wheels.The Agera S is a global sports car and is available in left or right-hand drive. The Agera R has flex-fuel capability and the S variant was developed specifically for markets where E85 fuel is unavailable. Amazingly, the Agera S puts out tremendous power while running on 93 octane fuel from the pump.

The hypercar has a very unique rear suspension that was invented by Christian von Koenigsegg, an all-new system for a road car – Triplex rear suspension. The Agera S Triplex rear suspension system uses a shock absorber and spring that connects the right and left rear wheel. The one-of-a-kind system allows the two rear wheels to influence one another when desired. The unique Triplex system works in series with the normal springs and dampers, allowing their spring and damping rates to be lowered. This results in increased comfort and better handling on rough and wet surfaces without compromising dry track handling.

The Koenigsegg Agera S is powered by a 5.0-liter V8 bi-turbo engine that is built in-house at the Swedish factory. It pumps out 1030 hp on 98 octane RON or 93 octane DIN. The Agera S has over 1000Nm of torque from a low 2700 rpm and 1100Nm from 4100 rpm. These are extraordinary power numbers considering the small displacement of the V8 engine. And Koenigsegg says the powerplant is “extraordinarily reliabile.”

And the engine is the lightest and most compact hypercar engine in the world, weighing just 197kg complete with flywheel, clutch, dry sump system, Inconel exhaust manifold and turbo. Koenigsegg says, “This is truly downsizing without compromise. These characteristics make it one of the most flexible and easy-to-use hypercar engines in the world.” The 5.0-liter V8 is mated to the newly developed seven-speed gearbox for the Agera S which features a world’s first dual clutch system for a single input shaft gearbox that allows class-leading shift times.

How much does the Agera S cost? The new hypercar won’t come cheap. The Agera S has sold for a record $4.3 million US to wife of investor Denis Chua in Singapore. The two-seat sports car was just unveiled at the Ritz Carlton Millenia hotel and is the most expensive car sold in Singapore to date.