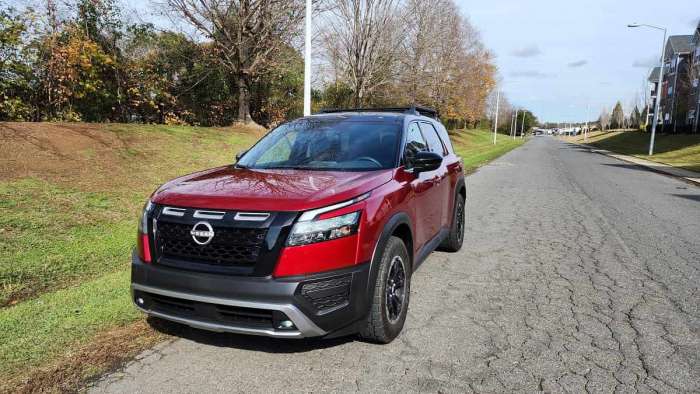 Nissan has introduced a new trim to its 2023 Pathfinder lineup, called Rock Creek, to help families get farther into nature to find more remote campsites or fishing holes down gravel roads and two-track trails. This week Torque News drove this off-road SUV and presents you this review.
Advertisement

A new generation of the Nissan Pathfinder appeared for the 2022 model year, sporting a new design, room for up to eight passengers and a cabin that is both more modern and more comfortable. The 3.5-liter V6 producing 284 horsepower is back, but it is now paired with a nine-speed automatic transmission, while all-wheel drive is now standard in Canada. Towing capacity remains at 2,722 kg or 6,000 lbs. The big news for 2023 is the addition of the Rock Creek Edition, benefiting from a raised suspension, exclusive 18-inch wheels, all-terrain tires, tubular roof rack, trailer hitch, LED fog lights, a 360-degree camera system with off-road mode, orange interior stitching and second-row captain's chairs for seven-passenger seating.

In the automotive industry there is a trend towards off-road editions. Look, for example, to the arrival of the X-Line (Kia), Wilderness (Subaru), Timberline (Ford), AT4 (GMC) and TrailSport (Honda) versions. Nissan had, however, been one of the precursors of this trend with the Pathfinder Rock Creek launched in 2017. It reiterates its proposal with the Pathfinder Rock Creek 2023, an edition better stocked than the previous one to face the difficulties that one can meet outside. 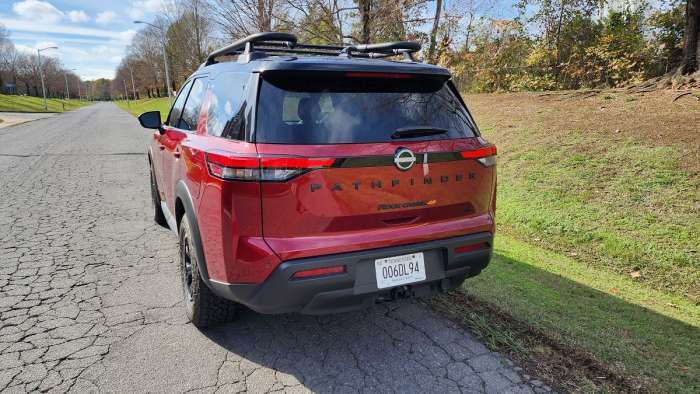 First, the 2023 Rock Creek's suspension is reworked, mostly because it's up in comparison to what it is in the regular Pathfinder. Even if the rise is not spectacular, the 16 mm more clearance gives it a definite advantage over a regular version. In addition, the suspension calibration of the Rock Creek version has been redesigned and 18-inch wheels with adapted tires have been installed to improve the ride.

The other major change occurs under the hood, as the engine receives some programming improvements to improve it. The sum of 295 horsepower is reached and the torque peaks at 270 lb-ft, a respective increase of 11 horsepower and 11 lb-ft of torque. The nine-speed automatic transmission and all-wheel drive remain unchanged compared to a regular Pathfinder. To put it in simpler terms the 2023 Pathfinder Rock Creek offers increased available horsepower (295 hp versus 284) and torque (270 lb-ft versus 259) over the standard grades when using premium fuel, due to revised fuel mapping. By the way Premium fuel is not required. You can use regular fuel. But you do need to use the premium fueld if you want to get the increased horsepower and torque.

Exterior and Interior Styling of the 2023 Nissan Pathfinder Rock Creek

Of course, Pathfinder's Rock Creek Edition wouldn't be one without some tweaked exterior styling, and that's probably a big part of what will attract potential buyers of this SUV. In addition to a retouched grille, now all black and including mesh, the reinforced bumpers with skid plate in the bottom and the oversized wheel arches add to the appearance. 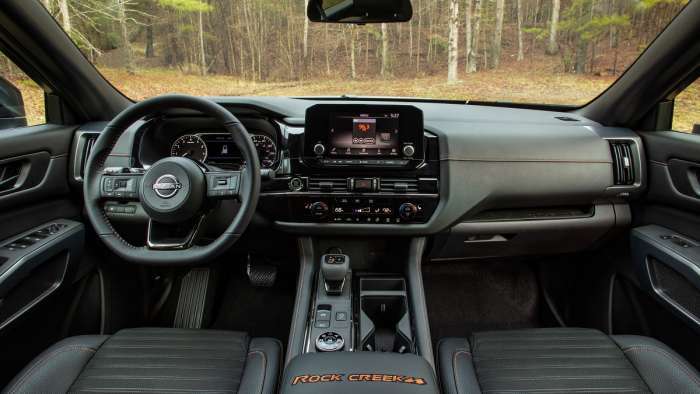 To increase the practical side, the manufacturer saw fit to install a tubular roof support, which can support a mass of 100 kg (220 lb). Considering consumers' interest in camping, especially with a tent placed on the roof of the vehicle, the idea makes sense for such a version. On board, orange stitching and Rock Creek badges adorn this version. 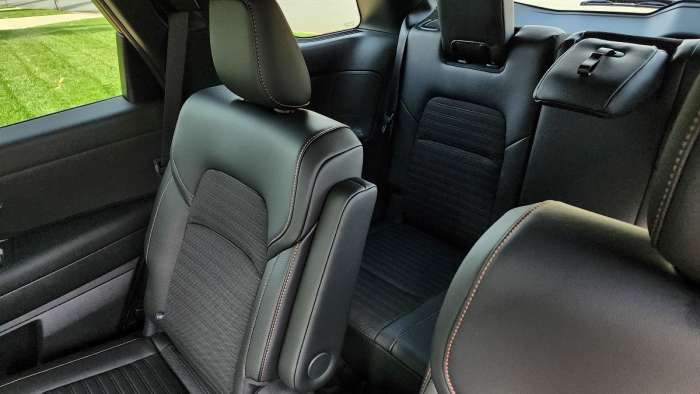 Inside the Pathfinder's off-road version, we find all the amenities one can get for this model: leather seats with contrast stitching, digital gauge cluster, nine-inch NissanConnect infotainment system (eight inches standard), navigation, AroundView parking camera with multiple viewing angles and tri-zone climate control.

The driver has complete information displayed on two screens, we no longer find traditional pointer instruments, the cluster of instruments is displayed on a 12-inch screen, there you have full information on the behavior of the vehicle, speed at which it is driving, gearbox status and valuable information such as oil pressure or fuel level. In the center of the board we find a 2nd screen with a hybrid configuration, since it has a touch function, but in the lower part we have rotary buttons and physical activation keys - that is, they must be turned or pressed to activate them, in the lower part The screen also houses the controls for the three-zone climate control system -two for the first row- and the other zone irrigates the 2nd and 3rd rows.

There are also Nissan ProPilot Assist driving aids, including lane centering assistance, intelligent adaptive cruise control, speed limit assistance and a few other features. It's a nice, minimally invasive system. The AroundView monitor requires no learning curve and remains one of the most accurate and well-implemented versions of this technology on the market today.

Unsurprisingly, the interior volume is very good, including the third row, which can accommodate adults. It's also accessed through second-row seats that tilt and slide with the press of a single button, so you can leave a child seat installed in the second row without limiting your access to the third.

You won't find many seats more comfortable than the ones you have here, as the Pathfinder benefits from Nissan's patented zero-gravity seating technology in the first two rows. These seats support and cushion you in all the right places, so you maintain a comfortable posture.

The comfort offered by the seats (which are heated and ventilated in the front and heated in the second row) is matched by the ride, which is smooth, controlled and utterly luxurious. Add to that a steering rack that doesn't wobble even in the biggest undulations – very little wheel vibration – and you get a ride that's beyond its class. The Pathfinder just got its Infiniti QX60 cousin revised for 2022; it will be interesting to see how much better a ride it could offer.

The 2023 Nissan Pathfinder is offered in well-equipped trims: S, SV, Rock Creek, SL, and Platinum. Every grade is available with 2WD or Smart 4WD, except for Rock Creek, which has standard 4WD.

The engine has a good level of power and a very good level of torque delivery. The work of the automatic box works silently, the staggering is good and this type of transmission with so many changes is designed for rolling at constant speeds where the V6 rotates at low RPM regimes with the consequent low consumption and lower emission of greenhouse effect gases.

The ride quality is good and although one might think that it has high off-road capabilities, we must not forget that the traction scheme is integral (AWD) but not 4x4 . The driver has at his disposal a terrain type selector to choose between SEVEN different programs for power management in the drive axles, ranging from the normal and comfortable mode for use in the city to the modes for rougher terrain or designed for when the vehicle is towing something.

On a day-to-day basis and in city traffic, the behavior is refined. The handling is smooth and the work of the suspension is silent.

The assembly quality makes the cabin quiet and the insulation is adequate as we observed in our short test. The 5th generation Pathfinder brought out the caste of a model and a name that we were already forgetting that was gradually eclipsed by the competition due to the inclusion of a CVT box in the 4th generation. 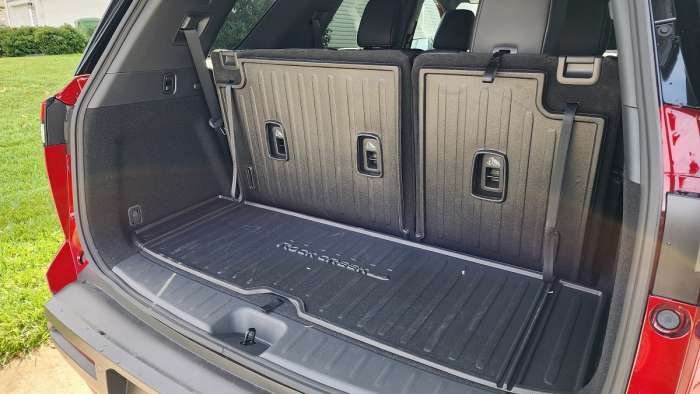 The 2023 Nissan Pathfinder Rock Creek has arrived in the summer and is offered in four monotone colors and one two-tone color. Nissan continues to demonstrate that it has vehicles ready to tackle any type of terrain, whether it be in the city or on off-road adventures. Last week, Nissan Pathfinder Rock Creek and Frontier PRO 4X were recognized by the Texas Auto Writers Association as category winners for off-road adventures. 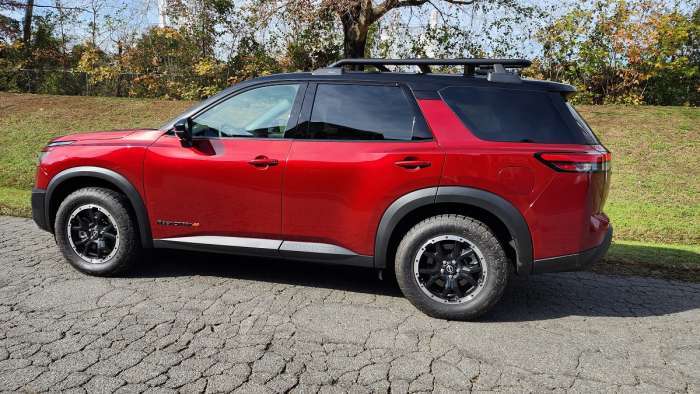 Here are several particular things I loved in the 2023 Pathfinder Rock Creek: Appearance, smoth and sildent driving and confident performance. Have you test-driven it? If yes, or have an opinion, please share your view in the comments section below.