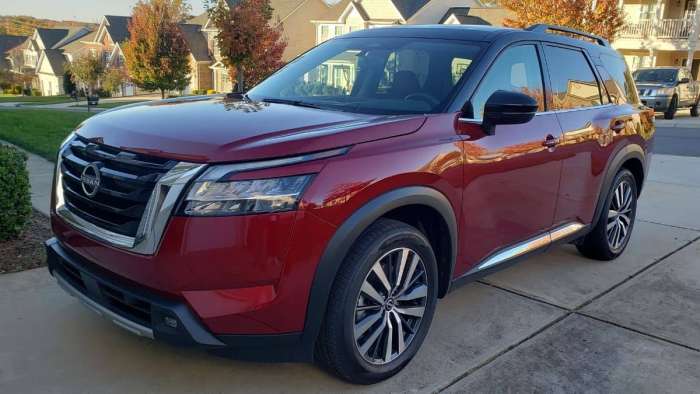 2022 Nissan Pathfinder Platinum 4WD Review: All-New From The Ground Up

It took Nissan eight years to refresh its Pathfinder. Some may say that's a long time, but the Pathfinder's fifth generation scores some important points against its competitors.Today Torque News reviews the 2022 Nissan Pathfinder Platinum 4WD.
Advertisement

The Nissan Pathfinder was in dire need of a makeover and the 2022 one is doing it a lot of good. Even though it was starting to get old, the Nissan Pathfinder continued to perform well in its niche, especially when it comes to price and reliability. Nonetheless, with the midsize SUV segment having become so dynamic with offerings coming from all corners of the globe, Nissan had to give the Pathfinder a complete overhaul. Admittedly, this new model will be criticized for being conservative in terms of engines, but it is obvious that it is starting on the right foot to become a commercial success.

The Nissan Pathfinder is an important model for the manufacturer. Consumers valued the fourth generation for its capabilities, space and price, but its ripe age took a toll on it, as did the reputation of the CVT. For 2022, Nissan is launching the revised and revised fifth-generation Pathfinder, a vehicle that has everything to get back into the race.

Highlights of the 2022 Nissan Pathfinder

The MSRP prices vary from $33,410 for the Pathfinder S 2WD to $48,090 for the pathfinder Platinum 4WD. The base price is higher than the previous generation, but the equipment is also more generous. 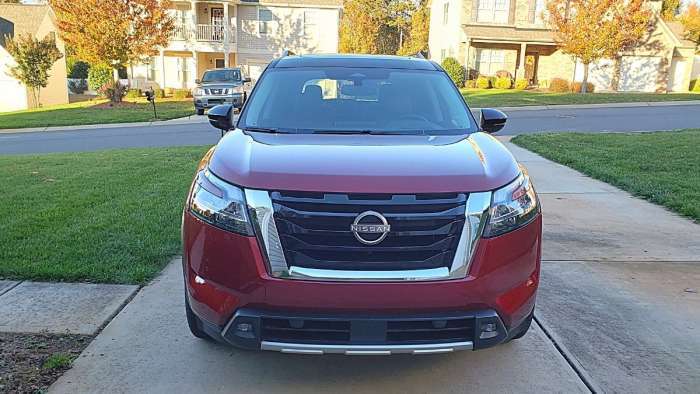 In fact, here are the complete 2022 Pathfinder prices.

Nissan really needed to make a refreshment insider the interior of the Pathfinder. The good news is, the execution is very good. The seats are comfortable, their support is good, and the range of adjustments is great, making it easier to adopt a good driving position. Visibility is good from all angles, with the exception of the rear when all the head restraints are up. A rear-view camera mirror - as in the Subaru Ascent, Toyota Highlander or Chevrolet Traverse - would have been welcome. Speaking of cameras: Nissan really has improved the camera quality, giving it some nice high resolutions. Even my children, whom I regularly drive around, noticed the difference compared to the previous generation Nissans.

The dashboard leaps to 21st century. The square shapes are assumed and give robustness to the eye. The Platinum trim comes with an advanced, connected technology with all-new available 10.8-inch Head-up Display, 12.3-inch digital dashboard, and ProPILOT Assist with Navi-link.

Nissan has also improved the quality of finish and assembly. The storage spaces are also more numerous and voluminous, in particular with a shelf in front of the passenger, a space under the center console and a basket under the boot floor. This is great for the family and my family members certainly appreciated the interior improvements of the 2022 Nissan Pathfinder.

In the second row, the Platinum trim of the 2022 Pathfinder has captain's seats between which there is a console that can be removed with one hand. The seats swivel easily to access the third row; they fold away at the push of a button, even with a child booster seat installed. It's very convenient.

As for the third row, it's still pretty low, but the headroom is good. Legroom is limited, but just moving the second row forward will improve it. It can now accommodate three people, making the Pathfinder an eight-seater vehicle in the S, SV and SL versions.

These increased dimensions of the 2022 Nissan Pathfinder, especially in width, have made it possible to make a third-row bench seat that is more welcoming to the young people for whom it is intended. It is spacious enough to accommodate two child car seats

However, despite its dimensions and its ability to transform its modular cabin, this utility cannot work miracles. When seven or eight people are on board, the trunk volume is too small to take all their luggage. Yet, this configuration remains highly sought after. It reflects the evolution of society, in particular the increase in blended families, local carpooling, without forgetting, of course, lovers of the outdoors who require a lot of space.

Equipped with a monocoque chassis, the Pathfinder offers a more modern behavior. In regard to touching the road, the previous generation was more constrained but the 2022 Pathfinder is more improved. With wider tracks, a more marked footprint on the ground and a steering with faster reduction, this SUV is more stable and less unbalanced to drive.

This redesign also made it possible to revisit the suspensory elements. These prove to be more comfortable thanks to a revised geometry and increased rigidity. But the most astonishing remains without a shadow of a doubt the silence of this vehicle, which benefits from thicker glass and better quality insulating materials. These two elements combine to reduce the number of decibels, as does the replacement of the continuously variable transmission (CVT).

The 2022 Nissan Pathfinder tows 6,000 lobs. To tow such a load, Nissan always relies on the naturally aspirated 3.5-liter V6. That's a robust and discreet engine, but which must now deal with a "long" gearbox to lower its consumption. According to the engine manufacturers, it has been reduced by 2%. Perhaps, Nissan could do better here. How? By coupling for example this V6 to an electric power unit (hybrid) or by revising the displacement downwards to allow the turbocharging to work its work. Nissan promises progress in this area, but is careful not to reveal its implementation schedule. In other words, we would like to see some hybrid technologies coming to the Pathfinder. Nissan's management so far remains silent on the integration of a plug-in hybrid mechanism on board the Pathfinder.

Nothing changes on the side of the technical characteristics. So it still develops the same 284 horsepower and produces 259 lb-ft of torque, which remains competitive in this class.

The best word to describe the handling of the Nissan Pathfinder is refinement. Like I said above, it's much quieter, stiffer and more agile than its predecessor, it almost looks like the platform has been changed even if it hasn't.

Playing with the driving modes changes the operation of the cog, the throttle response and the firmness of the steering: in Mud and Roots, Sand or Snow mode, up to 50% of the torque is transmitted to the rear wheels, improving grip. The cog has a lot of bite, despite the slight activation delay at the start.

The 2022 Nissan Pathfinder corrects all the flaws of the old one. Its capacities, its performance, its quality of construction are improved to the point where it joins, at least at first glance, the other tenors of the category which are the Honda Pilot, Toyota Highlander, Kia Telluride or Hyundai Palisade. Its price is also well studied, especially that of the mid-range SV version. Yesterday, as I was driving home, my neighbor stopped me and told me how much he liked the Pathfinder, its design and the look.

Nissan has done a good job redesigning the new Pathfinder.

Now, after the redesign of the Altima, Sentra, Versa and Rogue, not to mention good updates for the Kicks and Armada, as well as a very convincing prototype of a new Z, it's Pathfinder's turn. This midsize SUV alone represents, on average, close to 100,000 units sold across North America. So you will understand why it is so important for Nissan to modernize it.

The manufacturer admits to having been inspired by its past for the design which, visibly, displays a more beefy and angular silhouette. Gone is the look of a raised van. Make way for an imposing, square vehicle that projects the very image of the classic sport utility vehicle. The 2022 Pathfinder does bear a clear resemblance to the Rogue, which is not a bad thing.

We are glad Nissan has refreshed the Pathfinder, presenting a very competitive SUV in its category.