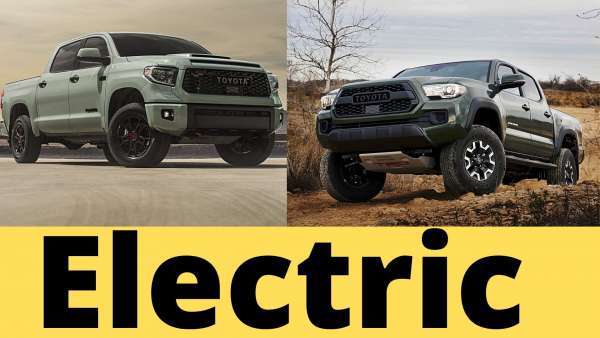 Toyota Will Build Electric and Hybrid Trucks, Like Tacoma and Tundra EVs

Toyota confirms that its going to produce all electric pickup trucks, including hybrid trucks. This means we will see either Toyota Tacoma and Toyota Tundra trucks converted into electric or hybrid trucks, or a new model names like the Toyota BZ truck series.

Little by little, the electric pick-up market begins to gain ground for this new decade. Hummer EV, Rivian R1T, Tesla Cybertruck, RAM, Ford, Chevrolet, are some models and / or brands that have already bet or will do so in the next time for vehicles powered by alternative energies.

Until now, Toyota had only talked about hybrid mechanics for its pick-ups, such as Hilux , but in recent days Motor Authority revealed that the Japanese brand will also join the trend of 100 percent electrified trucks.

While the focus of Toyota's presentation in Shanghai was the launch of the new BZ sub-brand for electrified vehicles and the reveal of a concept previewing a battery-electric compact crossover, just like the RAV4, and due on sale next year, Toyota also said during the show that it plans to launch both hybrid and battery-electric pickup trucks in the near future.

Still, it is not known which model will be the pioneer in having at least one variant with these characteristics , but if we rely on the competition, it is likely that Tundra will be the chosen one , since the full-size segment is one of those that it is mainly in transformation.

Both Tacoma and Hilux will have new generations in the next time , but as mentioned above, there will be hybridization although it is not known if the brand will decide to bet on a total electrification in some version.

According to Motor Authority Toyota's EV trucks are part of the automaker's plan to have around 70 electrified vehicles in its global lineup by 2025. This future lineup will feature 15 dedicated battery-electric vehicles, seven of which will fall under the new BZ sub-brand.