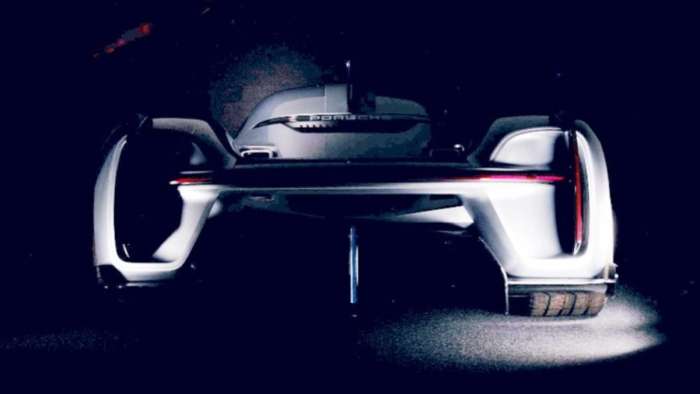 A look into Porsche’s deepest vault of secrets
Advertisement

There are few brands that have such an interesting and driven history as Porsche. It’s not just their ever-burning passion to dominate the race track that intrigues us, it’s also the minds behind some of the company’s greatest designs. Thankfully, this past weekend, Porsche’s social media team has begun a 2 week-long campaign in which they reveal rare pictures of cars that never made it to the road or, even the racetrack.

The first picture that they released (see below) features a car that is a “teaser haring back to the days of sports car racing of the ‘50s.” The limited view of the car’s lines is obviously intended to get our underwear in a knot and force us to tune in for more but from what we can see, there are some assumptions afoot. 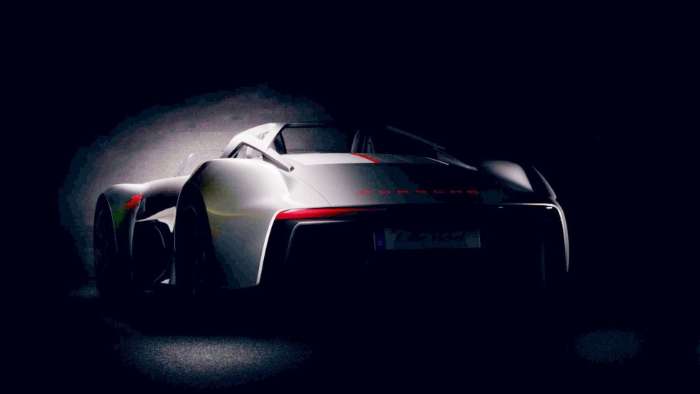 The big, curvy rear fenders, open-top, and frameless windscreen are good reasons to believe that the head of Porsche Design, Mark Mauer, was inspired by the legendary Porsche 550 Spyder. The license plate on the back also says “Little Rebel” which is a less than cryptic reference to James Dean’s “Little Bastard” car and his 1955 death from crashing his Porsche on a public road.

It could also be a Porsche 718 RS 60, which Porsche raced in the ‘50s along with the 550 Spyder. The 718 had the 550 Spyder’s same basic shape but with a larger safety structure behind the driver’s head and a more aerodynamic front end. Its name was also the inspiration for the new 718 Caymans and Boxsters. Either way, the license plate, and shape of the rear end have the 550 written all over it.

The second installment of secrets is a less-obvious guess. Captioned as “based on the racing car with which Porsche won 24 Heures du Mans”, this picture (see at top) sends some mixed signals. Porsche claims that while it was inspired by one of their Le Mans winners, it was originally targeted at “privateer racers”, or wealthy customers with race teams.

Porsche has and still is winning Le Mans all the damn time which makes narrowing down the field of victorious cars a little harder. Since all we get is the rear end in this pic, we immediately saw the huge fenders wrapping around the rear end and creating an outer-shell that exposes the taillights. This was a key design element of both the “Moby Dick” 935 and the 911 GT1 racecars. 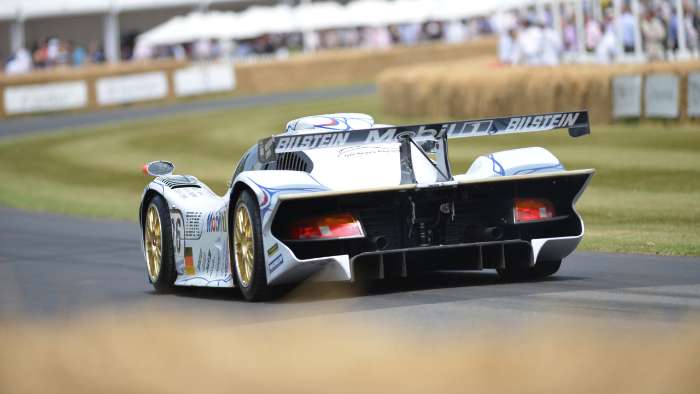 However, Porsche already did a modern 935 reincarnation and made 77 of them. So, our bet is that Porsche had the 911 GT1 (Picture Above) in mind when building this prototype.

Are we wrong? Tell us what you think these German hieroglyphics mean.

DeanMcManis wrote on November 11, 2020 - 1:50am Permalink
Thanks for the cool Porsche prototype cars pictures and story. One point is that James Dean's infamous fatal accident was not actually at a racetrack, the accident happened at the junction of California State Route 46 and California State Route 41 near Cholame, California. But Dean was going to be racing the Porsche 550 that weekend and was driving to Salinas when another driver did not see him and drove head on into Dean's 550 Spyder, killing Dean and severely injuring his passenger. One other tidbit was that even though sensational stories came out saying that Dean was going 90MPH+, in reality he was only going 55MPH when the other driver pulled out in front of him.
Lee Raskin wrote on November 11, 2020 - 3:22pm Permalink
Not so...you cannot believe every TV doc that says that JD was going 55 mph. Using the Porsche TYP 550 Transmission Diagram...rpm vs resulting mph...with the Spyder in 4th gear. ( range is 4,000 to 7,000 rpm) at say 5,500 rpm..which equals 75-90 mph. Rolf Wutherich the passenger does not believe that James Dean down-shifted to 3rd gear before the impact....which pushed a three ton Ford sedan 45 feet backwards. The Porsche weighs 1,300 lbs and flipped 360 degrees in the air landing on its wheels 40 feet to the west of the impact. JD was going fast...at least 80 mph without braking at the impact. Source: James Dean On The Road To Salinas, 2015.
Max Larsen wrote on November 12, 2020 - 12:27pm Permalink
Hi Dean, Thanks for your comment and correction! Must've flowed out of my head too fast and didn't catch it.
Lee Raskin wrote on November 11, 2020 - 3:25pm Permalink
Interesting how Porsche Design decided to use the name "Little Rebel" as code possibly for a new model Speedster/Spyder-type sports car . As a James Dean historian and early Porsche 356/550 author...I personally know that Porsche, AG has always frowned on paying tribute to both James Dean and the Porsche 550 Spyder in the same breath....as Dean was killed driving a Spyder, nick-named, "Little Bastard" ( just nine days after purchasing it from Johnny von Neumann's Competition Motors in Hollywood) on September 30, 1955.. It took forty years after his death for Porsche, AG to finally use James Dean's name in Porsche print advertising. The first reference came when Porsche introduced the new TYP 986 Boxster late in 1996 for the 1997 production year. Glad to see that Porsche Design and AG have finally recognized that James Dean and the "Little Bastard" or "Little Rebel" have become synonymous...as being COOL. James Dean and Porsche...Lives On!
DeanMcManis wrote on November 12, 2020 - 1:34pm Permalink
For the Porsche's speed, I was referring to a forensic computer reconstruction that calculated the actual impact speed at 55MPH. Dean had been ticketed earlier at 65MPH in a 55MPH zone. Even though peak power in 4th might be in the 4000-7000 RPM range, you can cruise along at 45-55 in 4th with no problem. Dean's 1955 550 Spyder had a 4 speed transaxle, so 4th was the top gear. It wasn't until '56 that the 550 had a 5 speed.