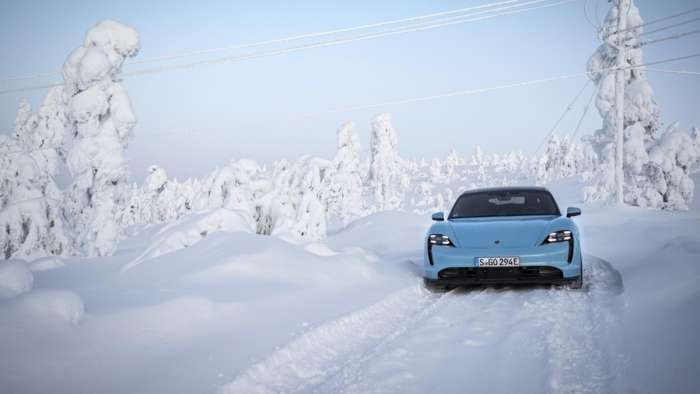 Porsche Taycan Is Getting Better Range Than What We First Thought

Now that multiple real-world tests have surfaced, we rethink the Porsche Taycan’s capabilities as something more than just a really fast EV.
Advertisement

Back when the Taycan was first being driven outside of Porsche’s facilities, specifically by journalists, the big questions started to arise about its own special EV capabilities. How much power, how expensive for this package, and most prominently, how much range it will get.

Porsche was visibly reluctant to release their EPA rated test numbers for the Taycan and even insisted on putting their own range test numbers in the press releases to provide a counterweight for the less than impressive 200 miles of estimated range from the EPA.

Here is where the played out performance comparisons of the Model S vs. the Taycan got actually meaningful. Tesla’s range technology was simply better than Porsche’s. They have been doing it for years now and Porsche’s freshman effort in the EV game fell below the bar, which prompted journalists to eat some of their words about their “Tesla Killer” Porsche.

However, the Taycan has circulated so much of our media and undergone so many tests that it seems our second guesses about its range may require a third guess. Just recently, the new-gen Porsche has proven its worth a little more in the range department, posting several improved real-world numbers than before.

Before diving into the numbers we must note that the EPA’s numbers, while they are federally official, are not always perfect. Similar, are all the numbers that journalists with press cars get, but a significant pattern has risen with these tests that forces us to take another look.

2 key tests have come about in the recent week regarding the EV’s range. Autoblog, an American automotive news website, recently conducted their real-world test of the Taycan. Multiple laps of their chosen series of roads proved unlike anything we have seen to date. A 287 mile range being their result. While this number is still less impressive than Tesla's 350 mile range, the comparison goes much deeper in reality.

While the the EPA number for the Taycan has proven to be inaccurate, so has the Tesla’s, just in a different way. Car and Driver, well known auto magazine, also recently came up with some surprising numbers on not only the Taycan’s range, but the Tesla’s too. The Model S’s numbers came to an underwhelming 222 miles of range compared to the 201 of the Taycan.

Obviously it was a very different test result than Autoblog, but it brings up an important point. The Tesla doesn’t get the real-world range that the EPA says it will, in fact it scored over 110 miles under its previously estimated figures, making the two cars even more closely matched.

The new Taycan Turismo Sport that has been spotted in snow testing recently could now be a real problem for the American-based car company. With Porsche’s wagon Taycan and soon coming electric Macan/Cayenne, they could gain some valuable ground on Tesla’s limited production line if they keep developing their cars range capabilities.

See you in my next story where I discuss how Porsche Macan gas has only 3 more years before turning to becoming an electric car.

Lain wrote on February 13, 2020 - 2:27pm Permalink
I cancelled my Porsche Taycan 4s in December and bought a Tesla. When looking into it, the Tesla and it’s charging network are light years ahead. Still have a Porsche, just one that I’ll keep for weekends when I get a chance to drive it.
DeanMcManis wrote on February 13, 2020 - 6:08pm Permalink
Pretty much every Porsche Taycan economy test that I've seen so far are specifically geared to take advantage of the Taycan's 2-speed transmission, and their battery buffer design, and focuses on bettering the numbers of the EPA testing. I definitely would NOT call the EPA's results inaccurate for the Taycan (or the Tesla). They were 100% accurate, and the EPA showed all of their driving tests, data, and specific results and conditions. The point of the EPA test is to run a series of mileage tests under different conditions, loads, speeds, etc... specifically trying to mimic real world driving conditions. One German test had the Taycan and Tesla run at 93MPH for most of the trip, and it's is no surprise that it still got decent range considering it's 2 speed transmission. The Taycan's battery is set up with a buffer, so even though the Taycan Turbo and Taycan Turbo S have a 93.4 kWh battery, only 83.7 kWh is usable. This engineering approach to EVs has advantages and disadvantages. The disadvantages are that the buffer battery pack will always get less EV range overall than being able to use the full battery pack's capacity. But the advantages are that the battery pack will most likely have a longer life. My Chevy Volt and ELR have a similar buffer, which limits the range, but it meant that there was nearly no loss in range over time. Other advantages to the buffered pack is that during hard driving and heavy loads which include climbing hills, or turning on the heater, or accelerating quickly, the buffered battery can take up the slack, and still give you decent range. Also not charging to 100% of the capacity extends battery life. Whereas the Tesla design puts the choice in the hands of the owner. They can drive normally and drive farther, or drive fast and still get better range than a comparably sized buffered battery. Most German engineering takes a conservative route and that choice usually serves them well. Whether that's lower efficiency or power ratings quoted from the factory, it results in owners being pleasantly pleased that the car outperforms it's ratings, and usually does better than expected. Porsche has earned the the reputation of over delivering on performance and capability before, which only helps their reputation overall. Plus it is good that Porsche is conservative with their engineering because the Taycan is their first all electric car, whereas Tesla has been building solely BEVs for 12 years. In Porsche's defense, the Taycan is an amazing car. It is the quickest Porsche to 60MPH that you can buy today, and it will run right with other high performance gas powered cars that cost more from Ferrari and Lamborghini. And even though the Tesla models are all more efficient, Porsche has succeeded in building an electric Porsche that runs with the best gas powered high performance cars out there today. Later this year Tesla will be coming out with it's Roadster 2.0 with 620 miles of range, and faster acceleration than any other production car, gas or EV. So it's clear that fast EVs are a moving target. EPA mileage ratings are always accompanied with the disclaimer "Your mileage may vary", and most likely the real world EV range numbers will be somewhere between the EPA's conservative numbers, and the best numbers found by Porsche fans and frugal owners. Realistically, most EV owners will charge up at home for a couple dollars a day, and an extra buck of electricity won't even be noticed by a Porsche owner, especially when they are having so much fun driving their Taycan. For me, I couldn't justify the 2X price premium for the Porsche Taycan over the Tesla Model S Performance or Model 3 Performance, but Porsche fans are definitely going to love the car.