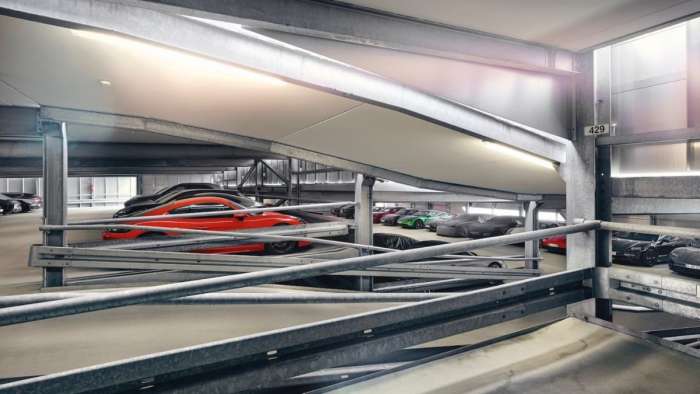 Porsche Has Over 1,900 Prototypes And Secret Development Vehicles Hidden In Weissach

Porsche Development Centre Weissach is a high-security facility where all your current favorite Porsches, as well as unseen prototypes, are being designed and built.
Advertisement

Every car brand needs a little secrecy, whether it be for the sanctity of an all-new model or the build processes of which they want to keep on the down-low. That’s why companies have facilities like Porsche’s Development Centre Weissach to do the job. This is a place where Porsche’s newest cars are drawn up, made into clay models, put through extensive testing, and sat in a garage to await their fate.

That garage is said to be home to over 1,900 cars, ranging from complete prototypes to new trims of existing models, and even to racecars. Porsche released a full story on what goes on inside this largely secret facility and how these cars end up in the prototype garage. We’re here to talk about all of it. 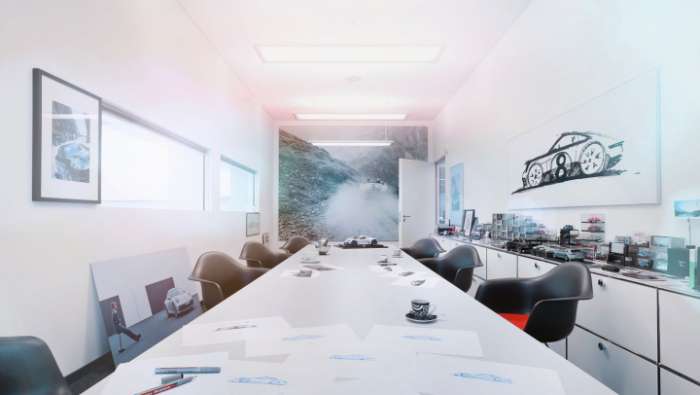 Porsche’s designers, aerodynamics experts, and model makers, all work under the same roof at the Weissach facility, making communication an easy and flowing part of the design process. Porsche does this to ensure the model’s secrecy. First, sketches on paper and tablets are made by the chief designer and are then discussed by their whole team at one long conference-style table. The chief designer doesn’t actually have a personal desk, just a room that includes all their employees. Porsche says this is no coincidence. In fact, they pride themselves on having everyone on a level playing field regardless of superiority or seniority in the company.

After the design team finalizes a sketch and dimensions, it’s on to the clay modeling. This stage goes hand in hand with the wind tunnel located right next to the clay model area. Each model is fitted with exterior accessories such as wheels, trim, grilles, badges, and mirrors to ensure they know what is going into the wind tunnel. 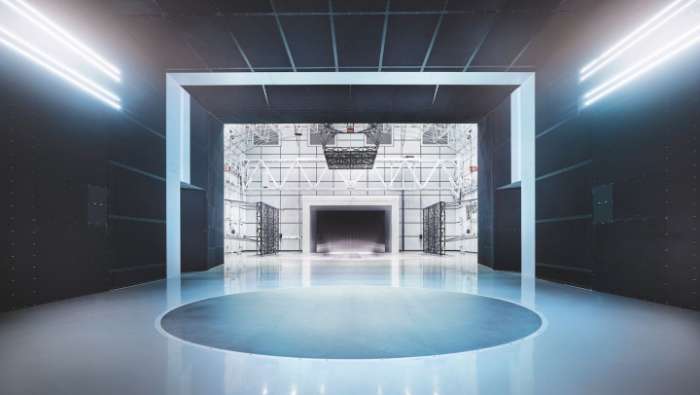 After a full-size model is built with all the production metals and plastics, it goes to Porsche’s new wind tunnel testing area. Beginning operation in 2015, this is wind tunnel is not the run of the mill model. In addition to measuring the drag coefficient of the frontal area and the rest of the car, Porsche designed it to actually move the surface underneath the car through a series of interchangeable belt-driven conveyors. This helps measure the flow of air going everywhere under the car and even into the wheels wells for a more accurate result.

Another crucial part of the wind tunnel is wind noise testing. Porsche’s electric vehicle development has put a huge focus on decreasing road and wind noise for cars that are mostly silent already. One of every six measurements taken on the entire car is dedicated to reducing aeroacoustics. They achieve this by installing a 600-microphone structure that hovers over every surface of the vehicle during wind testing. By doing this, they can measure which parts of the car are making significant noise from wind drag and then alert the design team for alterations in the next design phase. This is why the Taycan is one of the quietest EVs on the market today.

Every car’s drivetrain, especially electric ones, are individually tested in Porsche’s drive unit test building. The drive units are assembled, and before being fitted onto an outgoing production car, they are tested on a series of sophisticated workbenches that connect the hardware to an extremely high-voltage battery and are put through acceleration tests and durability tests. 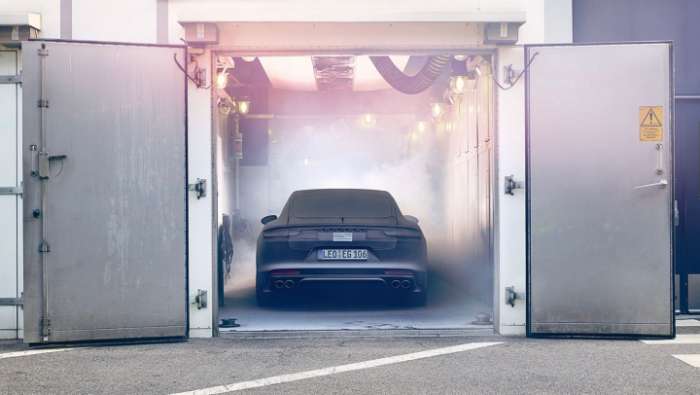 Is It Getting Hot In Here?

Once the bodywork is approved by the wind tunnel and the drivetrain is all good to go, the nearly completed car is put in a climate chamber, where it will test the vehicle’s resistance to extreme temperatures on each end of the thermometer. The room will be heated up to 90 degrees Celcius as a sun-like light is then turned on to test the visibility of the gauge display in bright sunlight. An experienced test driver then straps the car to a dyno inside the room, where the temperature is fluctuated up and down at different intervals to test not only the climate control effectiveness, but also the glass defrost, and the body’s resistance to extreme temperatures when the car’s engine is on and running. 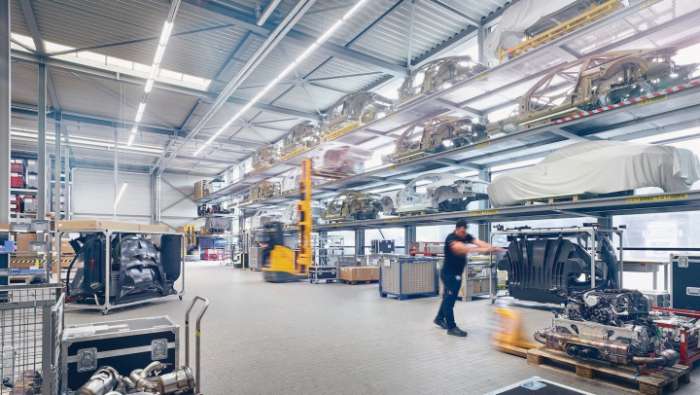 The car’s electronics are subject to testing as well. A special testing workbench can plug into the electrical’s power input and simulate anything from driver inputs, to harsh weather conditions, and basic electrical use like rolling down the power windows. This is all done in Porsche’s “Test House”, a large floor in the facility that is completely dedicated to the testing of electricals. Only the systems that pass this stage with flying colors will ever get the chance to be tested in the real world.

Throughout this entire process, each car undergoes the individual tests multiple times during its build. At any time during the process, a certain car or individual system can be sent back to a previous stage of development and put through more extensive testing to make sure everything works properly. So in reality, there is no chronological order for any of these testing measures. This is just the best we could do to make it cohesive in a written article. 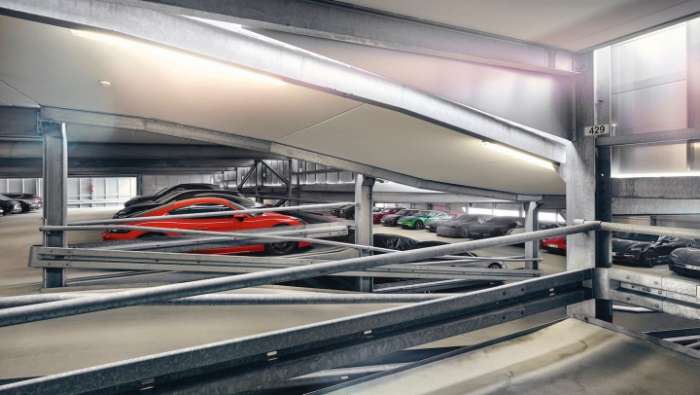 However, the most exciting part of all this is where these cars end up - the prototype garage. Currently, Porsche’s massive parking structure can hold 375 individual prototypes, but an expansion is underway which will allow an additional 1,147 parking spaces. Currently around 1,900 unseen cars are somewhere in Weissach, and a few are in that very garage. Now, obviously, there are not nearly 2,000 brand new models and prototypes waiting to see production. That large number most likely consists of new trim levels of existing vehicles, and several different test mules that represent both new prototypes and existing Porsche models. Those prototypes also probably have several identical units with different options and engines etc. All that mixing and matching adds up and the number seems more realistic after such examination. Although, this garage is still very elusive to even those working at Porsche. Only employees with an electronically verified permit are ever allowed to lay eyes upon the hundreds of models covered in camouflage and fabric sheets.

DeanMcManis wrote on January 18, 2021 - 7:23pm Permalink
I hope that Porsche shows off some more of their cool prototypes that they have hidden away. The recent reveal of a few of their unseen prototypes that you shared here was a real treat to see.
Max Larsen wrote on January 19, 2021 - 9:03pm Permalink
Yes! Porsche is always up to weird secret stuff and has been for years. The unseen prototypes we already saw were likely just a tiny fraction of the stuff they have/had in the works.

Tsingshan's Threat to Tesla: EV Maker Is In Battery Crosshairs
Tesla-Funded Research Reveals One of The Biggest Mysteries of EV Battery
END_OF_DOCUMENT_TOKEN_TO_BE_REPLACED