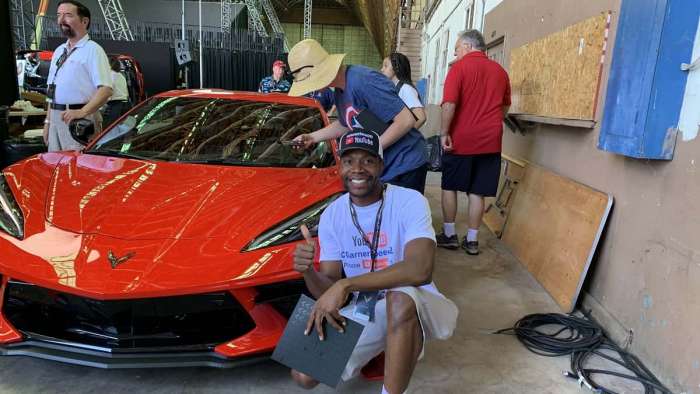 At the C8 Corvette debut on July 18, 2019, I had a once-in-a-lifetime chance to speak with the engineers and designers of the all new 2020 Corvette. The C8 is a huge transformation from the front-engine, seventh-generation Corvette. Read about how the engineers describe this awesome transformation.
Advertisement

General Motors did an excellent job with the seventh-generation Corvette. They were not only able to excite and entice their loyal customer base but the highly sought after younger consumer market as well. With the C7 Corvette being as popular as it was, this easily made the C8 Corvette something to look forward to.

The eighth-generation Corvette has been in the making for 6 decades and was originally brought up by Zora​ ​Arkus-Duntov, said to be the inventor of Corvette​, likely why Chevrolet dedicated its masterpiece to him. Being a C7 Corvette owner and having had the opportunity to see the C8 Corvette in person multiple times, I can tell you that the C7 and C8 are definitely more different than alike. One of the most exciting differences between the seventh- and eighth-generation Corvettes is the new “Z Mode”.

Until this release, driver modes have only included weather, eco, tour, sport, and track modes. The C8 Corvette comes with a new “Z Mode” which is actually ​two additional modes. These modes further optimize the performance of the C8 Corvette.

According to the engineers at Chevrolet, Z Mode allows the driver to choose between using steering and suspension together or separate. The driver can even start the car in this preset mode,so they can have the Z Mode turned on every time they turn on their car. While the Z Mode is not available in the seventh-generation Corvette, C7 drivers are still able to preset weather, eco, tour, sport, and track modes to their liking.

Why C8 Corvette Makes The Hype

Now let’s get into some of the information that the engineers said makes the C8 Corvette worth the hype. I had the exclusive opportunity to interview both Tadge Juechter, ​lead engineer of Corvette​, and one of his peers about the C8 Mid-Engine Corvette. I was able to dig into some of the questions lots of the followers of the channel wanted to ask. Another engineer who explained in-depth information on the C8 Corvette worked alongside Tadge for 5 years, which means he is the resident expert about the next-generation Corvette. In interviewing him I could see his passion for the Corvette and the brand all together. I started off by asking him what makes the new Corvette so special. He stated this entire car was just a huge transformation - not just from front-engine to mid-engine, but the entire car. 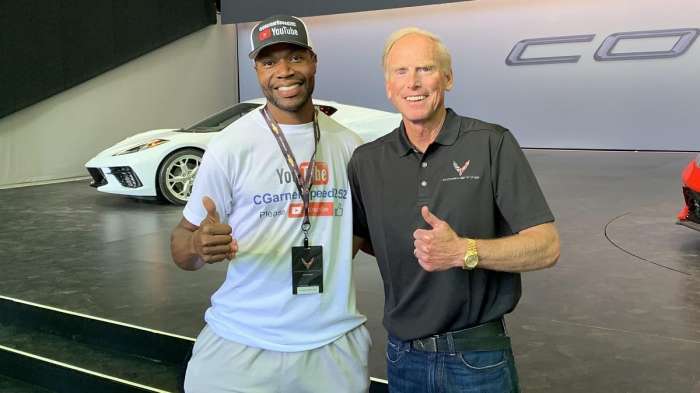 General Motors has had such a huge departure from their comfort zone. That’s something we all can agree on, especially since many of us never thought we would see the day a Mid-Engine Corvette would be released. Tadge mentioned their goal was to not alienate their current Corvette customers, but to pick up the younger generation on their way to creating a better car. One thing that lots of current Corvette customers complained about was trunk space. He stated that General Motors wanted to make sure the Corvette was still a car you could travel cross-country with. They ensured this by making space for two full-size golf bags in the trunk of the car and a duffle bag in the front where the engine normally would be.

Tadge went on to say they offer the same performance of their competitors as well.When you look at the new 2020 C8 Corvette it goes to show that you can keep the Corvette as your weekend car ​and
​ keep up at the track. One of Chevrolet's goals was to make sure you can unpack from your trip and head straight to the track. The engineers go on to say they wanted to make sure this car was at the right price point for its current and new customer base. They worked with Bowling Green vendors and their supplies to keep the price affordable for their customers, landing the all new 2020 C8 Mid-Engine Corvette under $60,000 - a shock to the world and the car industry. 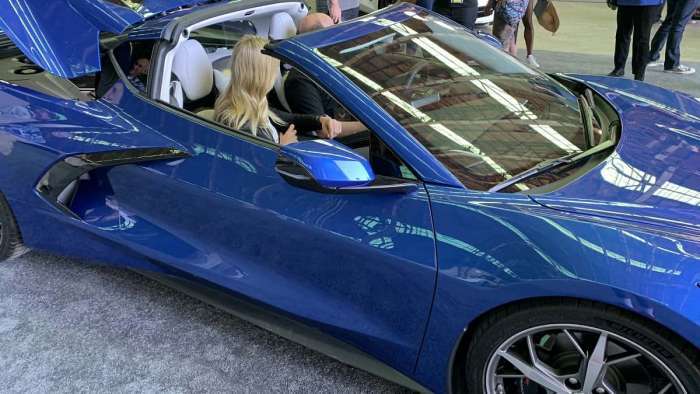 During this conversation we were standing behind the all new 2020 Corvette in Elkhart Lake Blue Metallic.

While on the topic of cost, conveniently stationed right next to the beautiful Elkhart Lake Blue Metallic C8 model, I wanted to know what type of cost I would be looking at for the exact model next to us. The C8 Corvette we were looking at had a lot of optional content including the Z51 package and carbon fiber pieces in the rear. The price? A cool $75,000.

Let’s all remember, though, that this is still in line with the front-engine C7 Corvette. This new Corvette offers you much more bang for your buck, including an awesome infotainment system. I decided to push my luck into asking about the C8 Z06 version. Many of my followers want to know how far along they were in making this version of the C8. Tadge gave me the answer I was expecting, “Today is only about the C8 Stingray.” The C8 Corvette Stingray will be in the showroom exclusively and they expect this car to be in customer hands by the end of December. If you own or ever driven a C7 Corvette GrandSport, you will truly love the performance of the New Stingray. According to Tadge, the view of the road with the mid-engine layout makes this car feel so exotic. After sitting in it, myself, I’d imagine he’s right! The engineers wanted to keep the car very low to give you the look and feel of an exotic sports car.

To that end, I asked why Chevrolet did not add vertical doors in the redesign. The answer was simple. They thought this change would take it too far out of price-range for their consumers.

With General Motors stepping out of their comfort zone and building this all new C8 Mid-Engine Corvette, I am very excited to see what’s in store for the new versions to come of this car.

See you in the next story where I am discussing the 2020 Corvette's pricing and why you shouldn't put your order yet because there will be constraints.

Ron wrote on September 12, 2019 - 4:46pm Permalink
According to the engineers at Chevrolet, Z Mode allows the driver to choose between using steering and suspension together or separate. The C7 does that now. That's why you you-tubers should stick to you tube and stop trying to be know it all car guys.

Tsingshan's Threat to Tesla: EV Maker Is In Battery Crosshairs
Tesla-Funded Research Reveals One of The Biggest Mysteries of EV Battery
END_OF_DOCUMENT_TOKEN_TO_BE_REPLACED