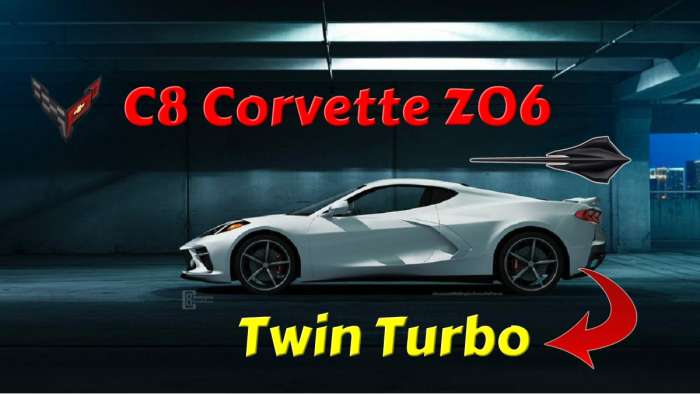 The C8 Corvette is a highly anticipated successor to the wildly popular 7th generation Corvette and it just recently leaked that the Z06 variant of the C8 Corvette will have a twin turbo configuration.
Advertisement

We are now less than 2 days away from the official reveal of the 2020 C8 Corvette and we recently found that the base model, that will be revealed on the 18th, will in fact be called a Stingray. Now we are getting information showing that the engine for the Z06 variant is likely to be coined the LT7 and it will have a twin turbo configuration. That by itself is a huge departure from the way GM typically makes high horsepower cars (GM sticks superchargers in their current high powered Corvettes) but that's only part of it!

The Z06 version of the brand new C8 Corvette will likely make its appearance in 2021 or 2022 and when it does it's going to have a DOHC (Dual Overhead Cam) and a twin turbo configuration that is rumored to make 700+ horsepower! The Z06 has been the "middle road" in terms of performance. It's a step above the Stingray but a cut below the fabled ZR1 and usually considered the "best bang for your buck".

Fans and early adopters of the C8 Corvette shouldn't hold their breath waiting for a turbocharged Corvette to be announced this Thursday. There were CAD drawings found recently that show a short exit exhaust which are likely to be placed in the C8. The twin-turbo engine isn't expected to be available at launch but it will instead be reserved for the C8 Corvette Z06 performance trim which will be a successor to the C7 Corvette ZR1.

As I said earlier, the Z06 engine is going to be called an LT7 but don't let the "LT" prefix fool you the engine isn't based on GM's old pushrod technology. It'll likely be built on the same architecture as Cadillac's upcoming 4.2-liter twin-turbo "Blackwing" V-8 (the same one that the Cadillac team said would never be shared outside of Cadillac).

We are all waiting in heavy anticipation for the July 18th reveal! It feels like it's been forever and it's almost unbelievable that we're finally about to see this thing for real!

DeanMcManis wrote on July 17, 2019 - 2:02am Permalink
Do you still think that C7 Z06s and ZR-1s will retain their value once the higher performance C8 Corvettes are released? As in your article, I had also read that the C8 Z06 will sport over 700HP, and that the top of the C8 Corvette line the king of the hill "Zora" may be a hybrid, offering AWD and 1000HP! Hopefully Chevy will at least announce the specs of the upcoming higher performance C8 Corvette models when they debut the C8 Stingray.
Justin Nohe wrote on July 17, 2019 - 1:29pm Permalink
The C6 ZR1 has maintained it's value pretty well even in the wake of the C7 ZR1. The ZR1's specifically hold value because of their performance and rarity. The C7 ZR1 is even more rare than the C6 ZR1 was and even more powerful as well. With that said the C7 ZR1 will likely maintain a higher value than the rest of the C7 lineup when the C8 performance models make their appearance. There's a few reasons for this but it basically boils down to the C7 ZR1 being the last of the front engine Vettes, limited production, and it being the top dog performance model of the C7 lineup.
Blorgon wrote on July 23, 2019 - 4:29pm Permalink
No car holds its value. People pay $600k for a Lambo Aventador and sadly have to sell them for 250-300k 5-6 years later. Cars are definitely not investments unless it’s a a very limited edition with a history. only something really special like a Ford GT will actually good it’s value or go up. The rest are going to lose 50% over a 5 year period including my 2016 aC7 Z06 :(
DeanMcManis wrote on July 17, 2019 - 6:47pm Permalink
I do not think that the C7 ZR1 had any negative effect on C6 ZR1 values. If anything the fact that Chevy actually built the C7 ZR1 would probably add to the C6 ZR1's collector's value, because was so powerful and rare, and was the new Corvette king of the hill again. I think that the car that lowered the value of the C6 ZR1 was the C7 Z06, being cheaper, newer, and better overall. Of course the C7 Z06 had teething problems initially, but once those got worked out, and used C7 Z06 prices fell, then C6 Z06 and ZR1 prices fell as well. The C8's value and effect on earlier Corvette's value will be more complex because the C8 Corvette is a new design, with new engineering.
Justin Nohe wrote on July 18, 2019 - 12:12pm Permalink
I agree. The C6 ZR1 probably wasn't affected much by the C7 ZR1 but as you said the C7 Z06 would have done it's damage. I would imagine the same will apply here. The C8 Z06 (or equivalent) will do the damage to the C7 ZR1, at least initially, because the base model to be announced tonight won't match it in terms of performance.
Robert wrote on February 19, 2021 - 5:19pm Permalink
According to the power to weight ratio over the C8 Stingray the C8 Z06 will be the best bang for the buck especially if you spec it as light as possible base model.! Plus it will be one of the last remaining N/A cars midengine out there this could make a low milage version rare in of its'self increasing price years later when all cars are electric hybrid or FI
tom clar wrote on July 25, 2019 - 1:31am Permalink
GM does not EVER get new ideas and tech right. Whether 4-6-8 engines, diesels, t-tops, digital dashes, supercharged engines or now mid engine Corvettes best not buy for a couple years until after the rest of the story comes out & mostly never buy!
Gene s Bonnell wrote on August 30, 2019 - 1:59pm Permalink
Please contact when they release the new C8 Gran Sport & ZO6 thank you.
Bubba Chambers wrote on October 31, 2019 - 6:06pm Permalink
Interested in all new comments & updates regarding the upcoming C8, Z06 Corvette including all options that will be available.
Kennethnuabs wrote on January 26, 2022 - 7:10am Permalink
C8 Corvette Z06 LT7 Engine Information Leak Shows A Twin Turbo Configuration | Torque News - Hydra market - сайт которой находится по адресу ссылка гидра hydraruzxpnew4af, считается самой крупной площадкой в России. На ней можно найти любой товар, который только возможно придумать. Кроме того, здесь есть и большое количество услуг. Потому каждый гарантированно сможет подобрать что-то важное для себя. Важно брать в расчет, что для использования маркета Гидра не нужно устанавливать стороннее ПО, вроде браузера Тор, Proxy, ВПН и др. Необходимо просто открыть ссылку Гидра и перейти на платформу. Далее необходимо тщательно рассмотреть карточки с товаром одного из продавцов. На портале находится огромное количество шопов с похожими позициями, которые отличаются по стоимости. Поэтому необходимо учитывать отзывы пользователей, сроки доставки и другие нюансы. гидра сайт