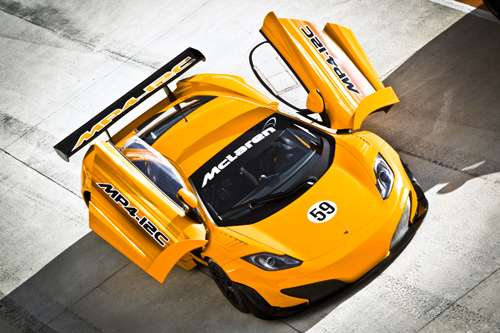 The McLaren MP4-12C GT3 would make company founder and namesake Bruce McLaren proud. McLaren Automotive has announced that a racing version of the production exotic MP4-12C is being developed for racing in the FIA GT racing series in Europe.
Advertisement

The mid-engine high-performance McLaren MP4-12C will be the first McLaren car built for the race track since the McLaren F1 GTR ended production in 1997, and the plan is to run a single development car in the 2011 series followed by delivery of 20 car to privateer racing teams for the 2012 season.

The race car will be built by a new manufacturer named McLaren GT, which "brings together the expertise of McLaren Racing, McLaren Automotive and CRS Racing". Accordingly, says McLaren, "a team of engineers, designers and test drivers with vast experience in Formula 1 and GT racing has been assembled to undertake the process of adapting the carbon fiber-based 12C to racing specifications."

The car itself is a natural step for the McLaren MP4-12C to take and was anticipated during the road car's development.

"From the early stages of the car's development we were integrating key members of McLaren Racing into the road car development team and this blend of experience and skill, combined with a 'can do' attitude and desire to push what is technically possible, has led to both a great road car and a unique racing car," said Mark Vinnels, McLaren Automotive program director.

Like the road car, the 12C GT3 race car will have the same one-piece-of-carbon-fiber "MonoCell" chassis as the road car, and the aerodynamics will be enhanced within GT3 regulations with a new front spoiler, door blade, rear wing, diffuser and louvers in the front fenders.

A special lightweight transmission has been developed by Ricardo for the GT3 car. With the change in the balance of tire grip with racing tires, it was necessary to move the center of gravity forward on the car, and the easiest way to do that was lighten the rear of the car where the transmission is. The Ricardo sequential shift six-speed transmission is almost 180 pounds lighter than the production car's seven-speed "Seamless Shift" gearbox, and McLaren challenged Ricardo to make it lighter, which resulted in a custom casing design for McLaren to use in the MP4-12C GT3 car.

The GT3 car will also have something no other GT3 car will have, claims McLaren, the steering wheel from the MP4-24 Formula 1 race car, complete with the integrated driver display, paddle shifter and switches.

Despite initial high demand for the cars, only 20 cars will be available for customers next season as McLaren GT doesn't want to overextend itself in supporting the race teams. Beyond the FIA GT3 series, however, McLaren GT plans to build around 20 more cars through 2013 and 2014 with McLaren and CRS Racing remaining "open-minded and optimistic about developing racing cars for other series and markets."

McLaren will officially sell the McLaren MP4-12C road car in the United States, even establishing a dealer network, the first time ever for McLaren. Maybe with a little persuasion, the McLaren MP4-12C GT3 will race on this side of the Atlantic as well.