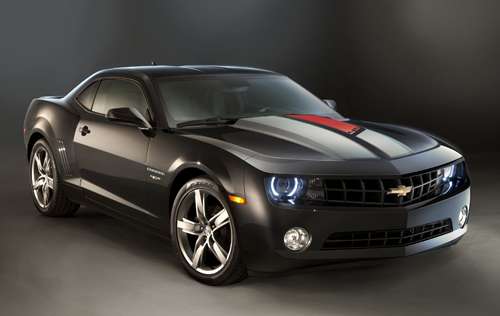 The 2012 Chevrolet Camaro gets more power from the V-6, a special handling package for the Camaro SS, plus a 45th Anniversary Special Edition available with either six or V-8 power.
Advertisement

The new engine takes a base engine V-6 to where it's never been before. The new 3.6-liter LFX, which goes into production this summer, will use direct injection as well as a number of other changes to produce a remarkable 323 horsepower. That's an increase of 11 horsepower but with no decrease in fuel economy. The EPA highway fuel economy for the 2012 Camaro with the V-6 engine is 30 mpg.

Direct injection sprays fuel directly into the combustion chamber and makes more fine tuning of the combustion process possible. Chevrolet has also reduced the weight of the engine by 20.5 lbs, which aids real world fuel economy by reducing the amount of weight the engine has to pull around.

According to a statement by Chevrolet, "The 3.6L is a 60-degree design, with the cylinder block and cylinder heads cast in aluminum for low weight. A forged steel crankshaft provides optimal strength in the bottom end, while the cylinder heads include four valves per cylinder, with a dual overhead camshaft design incorporating infinitely variable cam phasing. Compared to the 3.6L V-6 in 2011 models, the new LFX engine features:

The output of the six-cylinder is greater than the V-8s of just a couple of years ago.

The new FE4 suspension available for the 2012 Chevrolet Camaro SS is intended provide flatter cornering and "a more neutral balance during hard turns" as well as minimize understeer at the limit. Included in the package offered for the Camaro SS only are retuned front and rear shocks, new anti-roll bars (23 mm front and 24 mm rear) and 20-inch aluminum wheels with 245/40R20 front and 275/40R20 rear tires.

Chevrolet also tweaked the Camaro FE4 suspension by adjusting the suspension geometry, including reshaping the anti-roll bar to reposition then outboard of the shock mounts. The changes, according to Chevrolet, were in part a result of the development of the ultra-high performance Camaro ZL1. The benefit of the FE4 suspension package, available only on coupes, is "more effective body control and more precise response in performance driving."

The Chevrolet Camaro 45th Anniversary Special Edition will be available with either the new V-6 or the V-8 on the top trim levels (technically the 2LT for the V-6, 2SS for the V-8). The special edition will not be a limited edition. Chevrolet will build as many as people will buy.

Add the 2012 Chevrolet Camaro ZL1 to the 45th Anniversary Edition and the new 3.6-liter 323 horsepower V-6, not to mention the recently released 2011 Camaro Convertible, the 2012 model year is set to be a banner year for Chevy's sporty car.