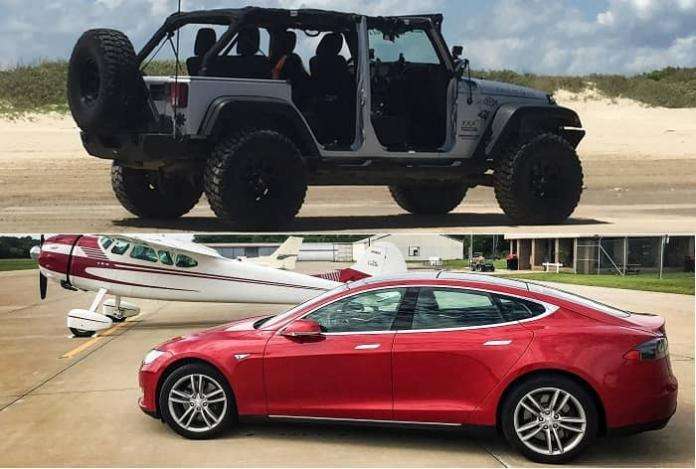 From Jeep Wrangler To Tesla Model S, Going From One Extreme To The Other

Going from a Jeep Wrangler to a Tesla Model S is not an easy change because you go from one extreme to another, but here is how it happened in my case.
Advertisement

Around April of this year, 2017, I was driving my modified Jeep Wrangler "Amazing Grace" and noticed she was getting a little long in the tooth; pushing 100,000 miles. My Jeep was a 2012 Unlimited Sport. Some of the modifications were a Teraflex Lift, Smittybilt XRC MOD bumpers front and back, Smittybilt H2O 10,000lb winch, and let’s not forget lighting that would turn the dead of night into day. It was not the most heavily modified Jeep Wrangler, but was capable enough to wheel it off-road on some of Colorado’s more famous trials. I’ll get into that in another article. But she was good, ran great, and had about $10,000 worth of equity in her especially as there was nothing wrong with her.

Because of that it got me thinking…”A lot of miles, no problems, and a bunch of equity.” Sell! So that is what I did.

Ok, what do you replace a Jeep Wrangler with?

If you ask my friends (read: the members of the Jeep group I founded, Prison City Jeepers), you would replace it with a newer Jeep or maybe a classic CJ. However, because my girlfriend also has a Jeep I was looking for something more refined. Something you could drive up to the symphony in without the loud roar of BF Goodrich KM2 mud tires and rolling out of the cab dressed in camo. This is where I began my search.

First, because let’s face it, I AM and will always be a Jeeper, I was looking at a Jeep Grand Cherokee Summit. I found two online that were simply gorgeous! Burgundy exterior (close enough to Aggie Maroon), and brown leather interior. They had to have a V8 because the other two Grand Cherokees I have owned were both limited editions and had the power of eight cylinders (insert Tim Allen grunt here), and they had to have four wheel drive. Both of my other Grand Cherokees left paved roads for places most people would never see. But they didn’t last long enough for me to even go look at them.

Second, I was looking at possibly purchasing a Porsche Panamera. I know, I know, the back of the car looks like the bulbous bow on a modern day oil tanker. But to me, they are way too pretty to write it off for such a thing. But what did make me write it off was the research I did on maintenance and known issues.

That brings be to my car. My girlfriend asked me during this whole process if I had considered Tesla. Tesla? Who can afford one of those? Rich, pompous people who have way too much money than sense. Well, I was wrong about all of that. Ok, to be honest I have run into some rich, snobby Tesla owners. I also know some jerk Jeepers as well. They hide among us in all walks of life. But most are not like that. And if you are willing to get a used one than a Tesla is a car that is attainable for the rest of us non one percenters, especially now that the Model 3 has landed. So here in lies the journey…

Through the vastness of the world wide interwebs (LOL), I was able to find a used Tesla on OnlyUsedTesla.com that actually fit my budget. That meant I had some research to do as I knew nothing about the car other than they were pretty to look at. Besides, I was not about to pay all that money for a used car without doing my homework. This meant I needed to find a dealership, go look at what they offered, ask a plethora of questions, and basically be a pain in the derrière to the salesman. So I did. His name is Malcom and he was awesome. My first concern was how far I could go before I would have to charge it again.

The car I had found was a 2013 Model S 85, multi-coat red, black leather interior, piano black accents and uber gorgeous. So I figured the use of AC, radio, both displays, lights, and my heavy foot, I would average about 220 miles on a 260 mile battery. That isn’t bad. My Jeep had the same distance per tank of gas. My next concern was where I was going to charge it. Turns out there is something called a Supercharger and they are all over the U.S. So much so that one could take a trip just about anywhere and be able to charge en route to get there. Like say, Miami to Houston. And they are free! The convenient part was that three blocks from my house is one of these magnificent little creations. Works for me. Now what is it going to cost me in maintenance? Turns out the car doesn’t cost much for regular maintenance either. There is no internal combustion engine so no oil to change. From this, the practical side of me was satisfied but I wasn’t sure I would actually like it. It’s a pretty car for sure but how does it ride? Malcom fixed that easily enough. He took me on a test drive in a Tesla Model S P100DL.

Now if any of you reading this has driven a P100DL (P is for performance, 100 is a 100kw battery, D is dual drive motors, and the L, well that stands for the Ludicrous mode for those of you that don’t speak Tesla yet), then I can just stop here and the rest is self explanatory. But for those of you who have never driven a Tesla much less the P100DL, you seriously need to schedule your test drive soon. Ok, I need to add a disclaimer. I have not driven a race car or dragster or a super car for that matter. However, I did own a pre-chipped Honda CBR 1100xx Blackbird so I definitely know a little about acceleration. And to that end, this car is quick! Seriously quick! Even when you know it is coming the acceleration will still surprise you. It put a really stupid grin on my face. LOL!

But there are a lot of things I noticed about the car. It is quiet, responsive, nimble. It is big and heavy but doesn’t feel like it. It was quiet. I know, I already mentioned that. That is why I am bringing it up again. My Jeep was really loud right before I sold it. The tires had some cupping and I had just recently replaced the hard top with a soft top. This made conversations almost non-existent in the Jeep. I had to raise my voice to talk to the person in the front seat next to me and there was no talking to anyone in the back seat. This in itself was probably the biggest reason I didn’t get another Jeep. I just wanted something quieter. I found it in a Tesla. So I bought it.

After paying the owner, switching over the owner info with Tesla (because it is connected to their servers) it was time to download the app and book the flight to go get it. First though, I started playing with the app. It still brings a smile to my face. I can play with my car with an app on my phone. Yeah, yeah, I know there are other vehicles out there now that can do that as well, but this one was my first. I was surprised to see that the app was able to tell that the car’s internal cabin temperature was 107 and located in the parking lot sitting in the sun. So at 1400 plus miles away I decided to open the sunroof, turn on the AC and vent the hot air outside. I cooled it down to about 74 degrees and commenced to telling anyone I knew about it. I messed with it a little more and then it came time for me and my girlfriend to go get it.

I was really surprised at the 1435 mile trip from Cutler Bay, FL to Houston, TX. As quick as the Tesla is, my biggest impression from the road trip was that it forced me to slow down. Slowed down in that I had to charge the car about every two hours and that took about 25 to 45 minutes depending, so while the Tesla was charging we started walking. It made us get out and see what was around us. To see what each place had to offer. Though I will say that in DeFuniak Springs, FL the supercharger was in an area where there wasn’t a whole lot around to see unless you wanted to go for a long hike.

However, I was able see a few places that in a normal car I would have just blown into town, hit a gas station for 5-10 minutes, not said anything to anyone, and blown on out again. With the Tesla it opened my eyes to new things. Opened my eyes to new adventures and people. It has been a road trip ever since. I have put 6000 miles on the Tesla in three months. It gets looks anywhere I go and people love to stop and ask about it. Usually it includes me telling them to climb inside and take a look. But unless you open your mind and open your eyes to new possibilities, you’ll miss it. Do I miss my Jeep? I did once. During the flooding here in Houston during Hurricane Harvey I wanted to go help those who needed rescuing and the Jeep was lifted enough to get through about 3-4 feet of standing water.

But I still drive my girlfriend’s Jeep so it isn’t like I am completely out of the Jeep scene. And since I founded the Jeep group I am in, they let me stay. But I will say this, I have loved my time in the Tesla immensely. I will leave you with one final thought and that is $1,227.00. That is the approximate savings in fuel so far based on my Jeep’s tank of 220 mile range on a 20 gallon tank and today’s gas prices of approx $45 to fill the tank.