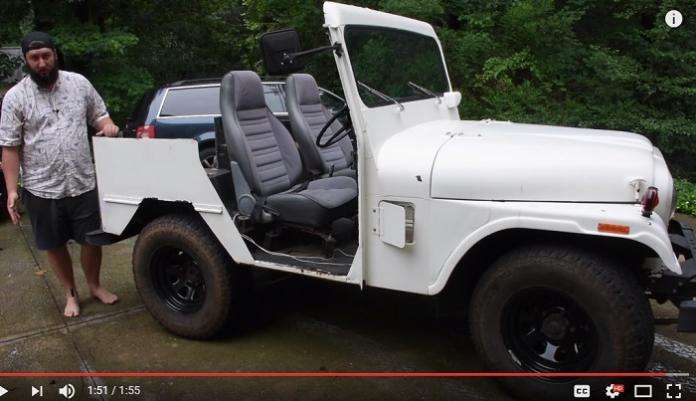 The previous owner of this 1973 Jeep thought it was broken. But I got it working within an hour.
Advertisement

Used cars are a great way to spend money — especially when you have a lot of it, but not many people tell you about the great deals us normal people can get. I am just a regular guy with a regular job who loves cars, but with a family and bills I can never seem to get up the money to buy all the cars I see in commercials. But I found a workaround.

One day I was scouring Craigslist, as I often do, and came across a Jeep.

It didn't have much information, but said something along the lines of “Doesn't work, need gone”. So I messaged the guy. He was asking $600 for it and to be honest I didn't have $600 to drop on a Jeep that at best needed a TON of work. So I did what I do best, I offered him a trade. Now I do have some experience in buying(and selling) cars. I am a former car salesman with a long line of bad automotive decisions(Namely my 1986 Yugo GV).

So I did what any good Craigslist buyer would do and logged into my fake email and offered him $50 for it. After low-balling him and getting rejected I messaged him back about an hour later and offered him my trade. A .25 caliber off-brand hand gun that was given to me by my uncle a week prior. The gun was worth maybe $125 and jammed every time I fired it. After that offer I didn't hear from him for a couple hours then much to my amazement he emailed back and accepted.

Now here is where it gets fun. He lived about an hour and a half away from me and my fiance would not let me bring home another car. So I convinced her to go to her moms house for the weekend and rented a trailer. I only had two days to drive there, get the Jeep, drive back, and get it running so my fiance wouldn't kill me. So after renting a trailer and attaching it to my trusty 2000 Silverado with 314,000 miles on it I set off.

After getting there the Jeep looked even worse than in the pictures. It had been sitting out for what looked like years and someone had attempted to rewire it with house-wire, but I didn't drive two hours(traffic) to come home empty handed. So I PUSHED the Jeep onto my U-haul and gave him the malfunctioning gun and split before he could pull the slide back.

After a terrible ride through Friday traffic in Atlanta I made it home. That's when the real work began. I grabbed my pressure washer and proceeded to get all the mildew, mold, and gunk off and out off the Jeep. After getting it cleaned up I set to work figuring out what was wrong with it. Now while I was picking it up the previous owner handed me this big hunk of metel and said “Here's the starter, I couldn't figure out what was wrong with her so i took the starter off.” so i took that to Autozone and put it on the test bench and bam! It worked. I bolted that back on with minimal difficulty and set to my next task — Electricity.

I may be good at a lot of things but electricity is something i just don't mess with. Its scary. But I set aside my fears and jumped in. As i sat there and stared at the tangled mess of wires I thought “Does it have a battery?”. After a quick look I settled upon no. So I grabbed an extra I had laying around and went to install it. This is where I think the previous owner had gone wrong.

The positive battery connector was in plain sight and so was the negative, I thought. But after further investigations I discovered the ACTUAL negative cable was tangled up in the underside of the Jeep. With a little help from a friend(who may have been a bit smaller than me) I fished it out and connected it. After a quick fluid flush I sprayed some starting fluid in the one barrel carburetor and turned the key… I would be lying to you if the sound of the straight six firing up on the first try didn't almost bring tears to my eyes. At that moment I knew my fiancé wouldn't kill me.

Now that I had the Jeep running it was time to make some modifications to it. I had $125 tied up in it at this point and wanted to make it look nice. So I dived back into Craigslist and came up with a set of rusty 15 inch rims for $80 and a set of Mud Terrain tires for $80 as well. I cleaned, prepped and painted the rims and had a buddy at a tire shop mount them on the tires for me. After that I tried to throw them on but hit yet another problem. The rear wheel wells weren't designed for tires that big, so I broke the angle grinder out and went to work. With some eyeball measuring we had it looking great and we threw them on.

But I wasn't finished.

Looking at the jeep for a couple weeks I thought it was missing something and it was. It needed a roll bar. So once again I went back on Craigslist and found a roll bar out of a CJ-5 for $50. A quick coat of $.97 spray paint and some clear it was good to go. And man did it make a difference.

Don't Miss: The Jeep Wrangler Gets Even More Capable with the Rubicon Recon

People say cars are for the rich and you can only have fun with them if you have money to blow, but I have proven with a little effort, patience, and a lot of luck you can get a fun, running driving car for under $500. All in all I have about $350 in it right now and can tell you it is worth every penny.

Alen wrote on August 24, 2017 - 9:51am Permalink
I wonder what's the best deal anyone here has had on his or her Jeep? What's the highest discount you have received when buying your Jeep?