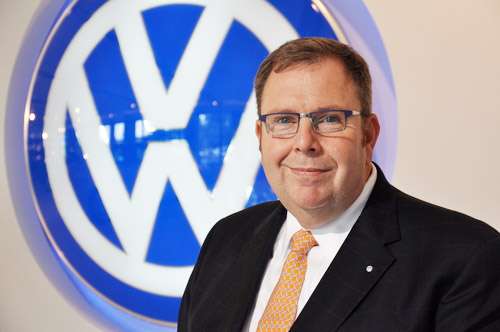 Tim Mahoney, Volkswagen of America’s Executive Vice President and Chief Product and Marketing Officer will address the Motor Press Guild (MPG) in Los Angeles August 21 on the brand’s strategy for growth and plans for a new American themed campaign.
Advertisement

The company’s Fahrvergnugen and Das Auto promotional campaigns failed to resonate with American audiences at the target level, so they are planning a whole new approach to American marketing.

MPG is the country’s the automotive media association with the most members and sponsors the popular MPG Track Day, to be held this year at the Auto Club Speedway October 9-10 in Fontana, CA. The August association meeting with Mahoney will be held at The Proud Bird Restaurant in Los Angeles.

US sales by Volkswagen of America has been increasing over the past several years and the brand just reported its best results for July in 39 years. Sales were up a full 27.3 percent over July 2011 and marked a 34.1 percent increase for the year-to-date. The brand expects to maintain double-digit growth again this year.

Following up on a $4 billion investment and a stated goal of 800,000 units in 2018, Mahoney will discuss the inroads Volkswagen has made the throughout the country and especially in California. He is also expected to announce a new direction for US advertising, dropping the previous German emphasis for a clearly American based premise starting this fall.

"With VW in competition with both Toyota and GM for the global sales crown, it will be interesting to learn first-hand some of the plans for achieving its aggressive growth goals in North America," said Laura Burstein, president, Motor Press Guild.

Tim Mahoney took his post with Volkswagen in May of 2011 as the man in charge of the strategic targeting for product planning and marketing in the US. Previously, Mahoney was Senior Vice President and Chief Marketing Officer for Subaru of America, performing similar tasks for that brand’s North American efforts.

With the current spike in California gas prices resulting from the fire at the Chevron Refinery in Richmond, Volkswagen’s lineup of high mileage and clean diesel cars may still have growing room on the crowded coastal highways.

On the other hand, it was just two years ago that CBS MoneyWatch named the 2007 Volkswagen Beetle the used car to be most carefully avoided. The current level of sales would suggest the problems owners faced five years ago have been addressed.

In any case, Mahoney’s appearance at the August luncheon of MPG is a savvy piece of efficient time management.