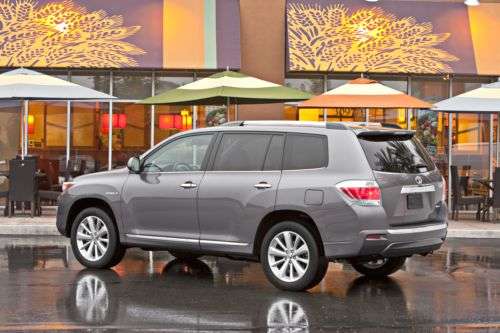 The 2012 Toyota Highlander is available in Highlander, SE and Limited grades produced at Toyota’s Princeton, IN manufacturing plant in both front-wheel and four-wheel-drive models.

A 270-horsepower 3.5-liter V6 is standard on the Limited grade and available on the other models. All Toyota Highlander Hybrid models are equipped with four-wheel-drive with intelligence in Highlander and Limited grades.

The 2.7-liter four-cylinder engine develops 187 horsepower at 5,800 rpm and 186 lb.-ft. of peak torque at 4,100 rpm with an EPA-estimated 25-mpg highway rating. The engine has a variable intake manifold and dual variable valve timing with intelligence (VVT-i), controlling phasing on both the intake and exhaust camshafts and optimizing torque and fuel efficiency. The 2.7-liter engine is exclusively linked to a six-speed electronically controlled automatic transmission.

The available 3.5-liter V6 that comes standard on the Highlander Limited produces 270 horsepower at 6,200 rpm and 248 lb.-ft. of torque at 4,700 rpm. The V6 is also has dual VVT-i and a variable intake manifold. However this model features a five-speed, electronically controlled automatic transmission with selectable manual sequential shifting.

The 2012 Toyota Highlander builds upon its delivery of the smoothest, quiet rides in the segment thanks to four-wheel independent suspension via MacPherson struts up front and a dual-link strut rear suspension system. All Highlander models have four-wheel disc brakes and full-time four-wheel drive is available on all V6 conventional models.

All 2012 Toyota Highlander models incorporate a corner-braking feature, taking advantage of the vehicle’s dynamic control systems, that limits brake pressure on inside wheels during cornering to help enhance handling through the turn. Hill-Start Assist Control (HAC) helps prevent the vehicle from rolling backward from a stop by applying braking pressure for approximately two seconds on all models.

The Highlander SE and Limited grades come with a backup camera standard and a 3.5-inch multi-information display. On 2012 Toyota Highlander grade vehicles, these features are part of the optional Tech Package. The display includes a backup camera monitor, clock, outside temperature and cruise information, including average fuel economy and speed, distance to empty, current economy level and a trip timer.

Available options and accessories include a voice-activated touch screen navigation system with an eight-inch screen; JBL audio systems; leather-trimmed seats with front seat heaters, and a power tilt/slide moonroof.On models equipped with the optional navigation system, the rearview images are seen on the seven-inch navigation screen.

The optional tow package for V6 models enables up to 5,000-pound towing capacity, while the four-cylinder package allows up to 3,500 pounds towing capacity. A power liftgate operated by a key fob or driver side control is optional on the Highlander grade and standard on SE and Limited.

It would seem the 2012 Toyota Highlander is observing the company mandate to Keep Moving Forward.