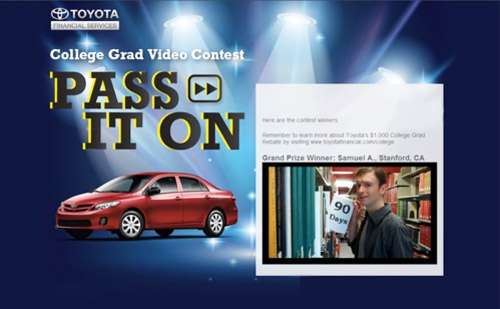 It was just a little retro rap and the willingness to look a bit silly that helped create the winning video.

The contest ran from April 3 through May 8 this year and any recent college graduates and grad students could enter by submitting a 60-seconds video to promote the TFS' College Rebate program.

Naturally, the public was encouraged to vote daily for their favorite video, until an independent panel of Judges selected the top 10 finalists.

The Second place winner was Keaton Davis, a fresh spring graduate from Trinity University in San Antonio, TX. He won $2,500 for an entry titled Pay it Forward. Not bad for a one minute video!

The third place winner, Karli Johnson, a recent grad from Northern Illinois University, won $500 for her entry exclaiming What a college grad can do with $1,000! At least she received half her wish right away

Registered online voters were eligible to win one of 200 Instant Win $20 gift cards redeemable from Amazon.com. At the end of the voting period, all participants were part of a random sweepstakes drawing for a prize of $1,000.

Arnett, a graduate student in East Asian Studies at Stanford University, created a video with his brother’s help. Though they live across the country from each other and shot their input separately, they collaborated on music, videography and editing via Skype.

"We decided to do the rap because we thought it would be a quick way to showcase our voices, present a lot of information about the rebate and because the delivery would be dynamic versus simply talking to the camera," says Samuel Arnett. "We grew up in that era when rap was popular and we figured we were OK with looking a little silly to get the word out."

Arnett and his wife don’t currently own a car, but will need one when they relocate to Monterrey CA soon, so the Corolla comes with perfect timing, as it will facilitate completing his final class this fall.

Arnett says he encouraged his family and friends to keep voting.

"Facebook really came in handy to reach out to all of those old high school and college friends,” Arnett said. I was asking them to vote every day. All in all everyone was really excited for me and hoping that I would get the car, and I'm really thankful for their support."

The College Grad Video Contest comes on the heels of the announcement Toyota is extending the College Grad Rebate program through January 2, 2013, allowing recent college grads and those about to graduate a $1,000 discount off the purchase or lease of select new Toyota vehicles including the Corolla, Matrix, RAV4, Camry (except the Camry hybrid), Tacoma and Yaris, plus all new Scion models, when financed or leased through a participating Toyota dealer and TFS.

A Toyota Corolla should give Arnett a leg up on paying off any student loans necessary to his degree with its high mileage and stellar safety rating.

College grads need a bit a help these days so a tip of the old mortarboard to Toyota.

LG's New EV Battery Plant Is a Welcome News for Tesla
Tesla Giga Berlin's New Hurdle: It's Not Only the Gov't, but Now Tesla Itself
END_OF_DOCUMENT_TOKEN_TO_BE_REPLACED