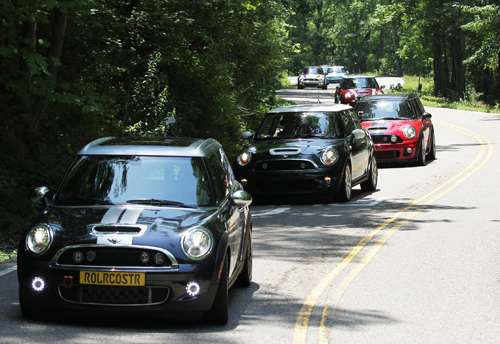 MINI owners throughout the nation are invited to Mackinaw City, Michigan to form the longest parade of MINIs ever to cross the world renowned 5-mile long Mackinac Bridge that spans the straights connecting Lake Michigan and Lake Huron.
Advertisement

A cavalcade of 1,451 MINI Coopers will be sufficient to set a new Guinness World Record and the effort is the brainchild of MINI USA and MINI of Grand Rapids as part of MINI's Not Normal promotional campaign.

“Our NOT NORMAL brand campaign conveys MINI’s individual, high-energy attitude toward life and highlights MINI’s strong, independent character,” said Tom Salkowsky, Department Head, MINI Marketing. “This July we’re rolling out the second phase of our brand campaign in several bold and refreshing ways and MINI ON THE MACK is a perfect example of that philosophy.”

Attendees will be treated to lunch at the Little Bear East Arena in St. Ignace following the mid-morning bridge crossing. A filling meal will to some extent be shed by a short walk downtown to the Bayside Music Festival, with a fabulous fireworks display after sundown.

The current Guinness Record for MINIs on Parade was set in 2009 in the UK by the London & Surrey Mini Owners Club, who brought 1,450 MINIs cars to the historic 2-mile racing circuit around Crystal Palace Park in London.

“The Mackinac Bridge was the world’s longest suspension bridge when it first opened in 1957, so it’s an historic and imposing location for attempting to set a new Guinness World Record,” Salkowsky added.

To be part of this record-setting event, owners should register, pick out a commemorative t-shirt and submit the nominal fee of $25 for adults and $10 for kids 6 to 12. The fee covers the toll to cross the bridge, an event antenna topper, lunch, car contests, shuttle service and entrance to the Bayside Music Festival.

“We are grateful to the Mackinac Bridge Authority and the St. Ignace Visitors Bureau for their generous support with this adventure. I’d like to thank in advance everybody who joins us for MINI ON THE MACK, and wish participating MINI owners an enjoyable, fun-filled and history-making weekend,” said George Sharpe Jr., General Sales Manager at MINI of Grand Rapids.

We checked with Nathalie Bauters of MINI Corporate Communications and all assembled MINIs will cross the Mackinac together even if the numbers are insufficient to set the Guinness Record. It would still be a wondrous thing to experience.

So the question becomes: Will MINIs rule on the Mack and will you be part of it?!?

We certainly would if only we could.