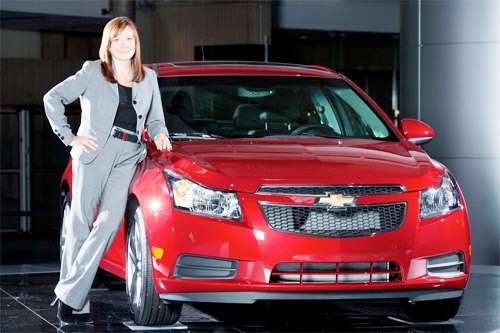 A look at the highest-ranking woman in the auto industry

Starting at a time when the glass ceiling was nearly bulletproof, Mary Barra has climbed through the ranks at GM over 32 years with determination and dedication – promoted to Senior Vice President of Global Product Development last year, she is the highest ranking woman in the automotive industry.
Advertisement

She followed her father’s lifelong passion for cars, growing up during the 39 years he labored as a die-maker for Pontiac. He retired just six short months before she began her career as an 18-year-old co-op student in the Pontiac branch of the General Motors Institute, now known as Kettering University.

According to a post by Lydia Dishman on FastCompany.com, GM’s presiding CEO, Dan Akerson, has placed her among the favored upper management personnel likely to succeed him. He confessed this admission a scant year after naming Barra to the highest position held by any woman in the automotive industry.

In her role as senior vice president, Barra takes a hands-on approach to overseeing everything from engineering to quality control on top of managing some 30,000 people and an enormous corporate budget.

“I have the best job in the company already,” she beamed at Dishman. “I am surrounded by great new cars, trucks, and crossovers every day, and I play a role in bringing new innovations and vehicle designs to life.” She also discussed the lessons of leadership she’s learned over 32 years at GM with Fast Company.

Barra paid her dues on the way up, working at everything from communications to managing Detroit’s Hamtramck assembly plant, along with many other positions. Through it all, it was her indomitable will and passion for the job that carried her up the corporate ladder.

“I have had many experiences that helped me grow and take with me a fundamental understanding of the industry and our challenges.” She also confessed to approaching each new job assignment, “like I am going to do it for the rest of my life.”

She also gave credit to the leaders she worked under for valuable guidance, growth and opportunity, never viewing her gender as a hindrance.

“Every time I approach a new business opportunity, or a new activity, or a new role, I approach it as an engineer, as a professional, as a leader. My gender doesn’t really come into it.”

Meanwhile she is pleased by the number of females now in upper management and on the boards of the industry. She admitted the professional level a woman is capable of rising to ties into the decisions they make in regard to career and personal life choices. How those goals are balanced determines the path of a woman’s career.

Barra utilizes a no nonsense approach to problem solving stating, “If you don’t address problems head on, they don’t go away – they get bigger. Get the right people together, address the challenges, and keep moving forward.”

Her management style is open and inclusive as she is always present at weekly staff meetings and frequently walks the departments with words or encouragement, inviting any suggestions to be sent her by email. On the other hand, she’s quick to make a ruling when a decision has to be made.

She sees herself as the coach of a team, but if a consensual solution to a problem isn’t evolving, she will step in to make the call. “If we have a spirit like that, we will have all the ideas on the table quickly and be able to make a decision.”

Her previous position was VP of Global Human Resources. She took that helm just as GM was dealing with their federally managed bankruptcy, but she saw it as an opportunity.

“It was an open book to innovate; a fresh start to say, how do we want to change the culture and what process and policies can we put in place to reenergize.” She told Dishman the same perspective is still there in her new position. “Nothing is sacred. We are still challenging processes.”

The Senior VP is a shameless booster for GM. “Our goal is to win in every segment,” she said. Today that includes subcompacts like the new Spark, muscle cars like the classic Camaro, comfy sedans like the Buick Regal, or the gaudy excess of a Cadillac Escalade. “You gotta have an array,” Barra says, believing the brand’s current success is based on their competition in all market segments.

Of course today, that includes hybrids and plug-in hybrid vehicles like the Chevy Volt, which she credits with helping revive the troubled automaker.

“It was critically important for them to say ‘Hey, we can do this’ and demonstrate GM’s capability.”

That carried throughout the company, she said, whether involved with the Volt, or not – everyone at GM felt better about what they were working to build.

She pointed out that GM’s ill-fated EV1 experience in California, involved them in electric car development even before Toyota created the Prius.

Nevertheless, they spent so much time developing the Volt; it allowed the Asian brand to capture a large slice of the hybrid vehicle market. Barra then pointed out they are beginning to turn that around with 10,666 units sold by the end of July, claiming to outsell both the Prius and Nissan Leaf.

We find this hard to believe as Toyota reported selling 21,111 units of the Prius family in August alone, but a 50 percent uptick over last year’s Volt sales in just seven months is notable nonetheless.

Despite, this Barra thinks the company showed wisdom in taking time to develop a battery one-third the size of the EV1’s 1,200 pounds of added weight, while still delivering an equal capacity of 16 kilowatt hours using lithium ion cells instead of lead acid batteries.

So what does a Senior Vice President for GM drive?

Besides trying out many of the manufacturer’s models on the job, her daily commute is in a Buick Regal, but she switches over to a Cadillac for weekends.

Does she have a dream car?

It’s a classic collector’s model of the Camaro – she’s wanted such a vehicle for a long, long time, but hasn’t found just the right one.

“Cars and trucks are exciting and an important part of people's lives,” Barra concluded. “It’s in my blood. I want GM to succeed.”

That’s a sentiment literally millions will agree upon whole-heartedly.

Tesla Contemplates A New Strategy for China Retail even As Sales Boom
Jay Leno on Elon Musk & EVs: “I Think He Should Get ... Credit"
END_OF_DOCUMENT_TOKEN_TO_BE_REPLACED