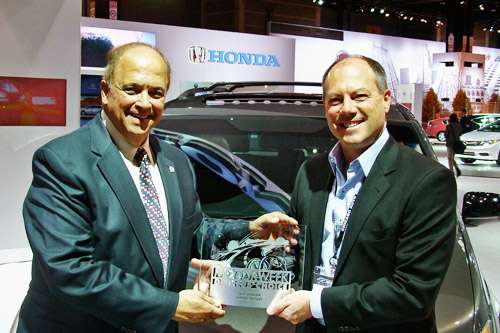 For the sixth time in 13 years, the Honda Odyssey has garnered MotorWeek’s Driver Choice Award for the Best Minivan and has also been added to Parenting Magazine’s 2012 Smartest Cars for Families list.
Advertisement

The eight-passenger minivan is fabricated here in the U.S., and has received the highest fuel economy rating for an eight-passenger vehicle at 28 mpg by the Odyssey Touring. It also gets the best possible safety ratings from both NHTSA and IIHS as a 5-Star Overall Vehicle and a TOP SAFETY PICK, a rating currently unmatched by any other minivan.

"Beyond great packaging, class-leading fuel economy, unparalleled safety ratings and cutting-edge family-friendly features, the Odyssey was designed to be fun to drive." said Michael Accavitti, VP of marketing operations for American Honda. "Being honored with a Motorweek Driver's Choice Award for a second consecutive year confirms that the Odyssey remains the best minivan choice for those who truly enjoy driving."

Produced by Maryland Public Television, MotorWeek airs on an impressive 89 percent of PBS stations nationwide, and is also available on Discovery's Velocity and the V-me network.

Parenting Magazine’s picks for the 2012 Smartest Cars for Families placed the Honda Odyssey at third behind the Chevy Traverse and the Chrysler Town & Country. It placed ahead of the Infiniti JX, Toyota Prius v, Jetta Sport Wago TDI and Nissan Quest LE.

Six out of eight chosen are minivans for large or highly active families. Only the Toyota Prius v and Jetta Sport Wagon TDI are suitable for smaller, budget-conscious families out of this group.

When a car wins a single award it doesn’t necessarily mean all that much, though it can in some instances. Still, when a vehicle like Honda Odyssey starts to rack up multiple awards, there must be something there worth investigating.

Toyota's First EV Will Have a Name of BZ: Toyota BZ
First Videos From Inside The Boring Company's Las Vegas Loop
END_OF_DOCUMENT_TOKEN_TO_BE_REPLACED