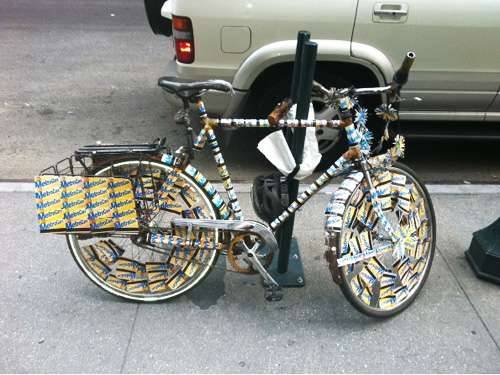 The new Ford Fusion, to be released next month, has sparked a collaboration with MILK Studios, who have revealed "Wall to Wall: The Fusion Collective" - a new immersive gallery experience, complete with original multimedia artworks and performances, live music, as well as panel discussions exploring the concept of fusion that opened in New York and will travel to Los Angeles.
Advertisement

Ford’s designers set out to blend form and function in the new Fusion with hopes of striking a chord with buyers by creating an accessible a high-end product previously beyond the reach of the average citizen.

Artistic imaginations given flight by that concept include Matthew Williams, former creative director for Lady Gaga and current collaborator with Kanye West and ShowStudio. They have created artworks for the project and are sharing the journey of their creative processes with visitors online.

"In the Ford studios, we bring the best designers, artists and engineers to work together creating a new generation of vehicles, just as artists work tirelessly to bring their visions to life," said J Mays, chief creative officer for Ford. "Our collaboration with MILK demonstrates how the powerful concept of fusion has inspired a wide range of artists to come together and fuse their diverse talents, while allowing access to the creative process of this new generation of designers."

Simply put, Wall to Wall: The Fusion Collective is both a digital and physical gallery experience uniting fashion, music, photography and film with technology.

Other artists involved in the project include six multimedia artists including Pharrell Williams, Cyril Duval, renowned fashion and conceptual art designer, Nathaniel Brown, WIFE and Brian DeGraw. Each has created original artwork for the project and opened their studios to the public, documenting the creative journey via text and video at www.fusionists.co.

"Working with Ford on Wall to Wall: The Fusion Collective demonstrates the many similarities between the art and automotive worlds and the evolving creative process that happens between the walls of these creative studios," said Mazdack Rassi, co-founder and creative director of MILK. "This project let us tap into MILK's thriving subculture of artists, photographers, filmmakers and musicians, and gave them the means and the platform to animate their personal vision."

During the event, Ford will debut a short documentary featuring Pharrell Williams and Tyson Toussant from Bionic Yarn, producers of super-strong, fast-drying fabric made primarily from recycled plastic bottles. This relates to how Ford uses recyclable materials in its vehicles, repurposing 38.9 plastic water bottles for the seats of some Ford Fusion models. Bionic Yarn is a durable replacement for canvas used by fashion brands like Moncler and Timberland.

The Big SHFT: Tyson Toussant & Pharrell Williams, Bionic Men is part of the Big SHFT series Ford has produced with Adrian Grenier and Peter Glatzer of SHFT.com, which features 10 innovators who are transforming the world with groundbreaking sustainability solutions.

The exhibit opened in New York this week and moves to Los Angeles August 29. Finished works will be showcased on the website with certain pieces donated to art and design schools in New York, Los Angeles and Detroit, as an inspiration to the next generation of designers.

"Wall to Wall is going to be a modern show of sculpture, sound, paint, projections, choreography, film, light, music and automobiles that mixes the highly conceptual with the highly entertaining," said Geremy Gasper, co-founder and creative director of LEGS, MILK's in-house creative and production company. "In curating the show, we found artists that fuse together different creative disciplines in bold and cutting-edge fashions – each constructing their own unique multimedia world. It's a really diverse group of work, and we're thrilled to get this caliber of talent and vision under one roof."

In May’s view, the all-new Ford Fusion surpasses physical beauty. He thinks it will begin to change the way people view Ford. It is a mix of cutting edge technology with a wide choice of fuel-efficient powertrains that integrates sustainable materials into the manufacturing process.

"As they do with art, people recognize quality; they recognize beauty," Mays said. "It speaks not only to their practical side, but to their emotions and that's what we want to see."

Tesla Contemplates A New Strategy for China Retail even As Sales Boom
Jay Leno on Elon Musk & EVs: “I Think He Should Get ... Credit"
END_OF_DOCUMENT_TOKEN_TO_BE_REPLACED