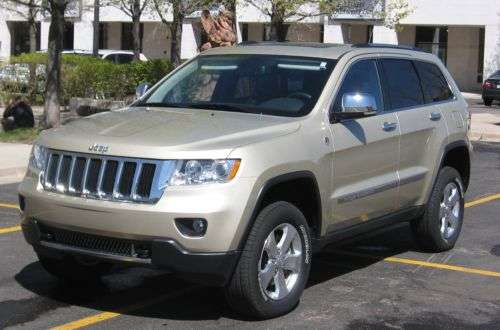 Having known owners who are avid evangelists for the top of the line Jeep, we decided to give the 2011 Grand Cherokee Limited 4X4 a thorough test in its true element – the Rocky Mountains at altitudes over 8,000 ft. Those who dwell at such altitudes and those who regularly commute between businesses or homes in the city and mountains have long considered the Grand Cherokee the reliable standard of mountain life and mobility.
Advertisement

Now nearing the end of its 20th model year, the largely reinvented premium SUV has a lot of new features never dreamed of when Jeep created this market segment so many years years ago.

A sport mode lowers the vehicle into its most aerodynamic stance and converts it to two-wheel drive, allowing the new Grand Cherokee to get up 19 mpg on the open road out of the 5.7-liter V8 MDS VVT power plant.

We managed to get 17.8-mpg on a weekend jaunt to Fairplay and back. We like the way it handled both the highway and the graded residential roads off Highway 285. The three level height adjustment is a handy feature as soon as you leave the pavement.

“Following in the footsteps of the benchmark 2009 Dodge Ram, the all-new 2011 Jeep Grand Cherokee is another proud graduate of our Advanced Interior Design Studio,” said Ralph Gilles, senior vice president of Product Design. “We achieved a world-class interior by using fine materials and maintaining a more focused attention to detail.”

Take heated seats, front and rear for example. Niceties like a rear view camera and parking assist. Navigation is by Garmin with a one year Sirius radio subscription that plays through a 506-watt super stereo with nine speakers including a massive subwoofer. Uconnect provides hands free phone and voice command and the articulated steering wheel is leather wrapped.

We particularly liked the 3D imaging of the navigation maps – they are much easier to quickly comprehend. Our only dislike involved the cruise control, which tended to allow great variance to the set speed in response to hills or down slopes. Set at the speed limit, the vehicle’s speed would wander up to 5 miles per hour above or below the set cruise speed.

All in all, we were quite impressed with the vehicle’s performance, comfort level, technical array and overall ease of handling in a large SUV.

The 2011 Grand Cherokee Limited 4X4 has a base price of $39,215 and the model driven had options, bringing the final price to $43,145. It gets five stars for 3 out of 5 crash tests, with four for rollover and for the passenger in a frontal impact.

It is an average particulate producer but a shameless pig in greenhouse gas emissions, scoring only 1 out of 10 in EPA ratings.

Nevertheless, it’s not easy to find a vehicle with this kind of off-road and towing capability that’s also an agent for greenhouse gas reduction as well. Such is the world we live in.

If you are one of those who spends most of your time above 8,000 ft. or splits your time between the upper elevations and the city below, the 2011 Jeep Grand Cherokee is better than ever before. It might be well worth a closer look. That goes double for 2012,