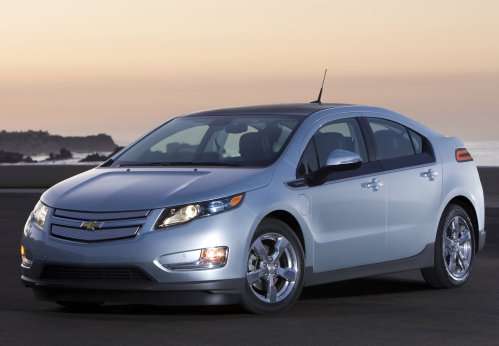 The 2011 Chevrolet Volt was named the 2011 World Green Car by a globe-spanning panel of automotive journalists at the New York International Auto Show (NYIAS). The Volt was chosen from a field of 12 new vehicles from around the world, shortened to three finalists. The Chevrolet Volt, edged out the BMW 320d Efficient Dynamics Edition and the Nissan Leaf for this honor.
Advertisement

"The selection of the Volt as the World Green Car is a further proof point of the fuel-efficient technologies that are now being offered by the Chevrolet brand around the world," said Rick Scheidt, vice president of Chevrolet marketing. "This award, and the others that have preceded it, validate the efforts of the development team to build a truly remarkable vehicle with the potential to transform transportation around the globe."

This latest accolade adds to a growing list of awards including:

In related news, Volt owners are going an average of 30 days between fill-ups. In fact, some say they are challenging themselves to see how fuel-efficient they can be by tracking how far they can go without having to buy gasoline.

"Volt owners drove an average of 800 miles between fill-ups since the Volt launched in December, and in March they averaged 1,000 miles," said Cristi Landy, Volt marketing director. "When the majority of miles driven are electrically, gas usage decreases significantly."

Of course, if you visit a gas station that infrequently, you have to set up to clean your own windshield at home more often. Nevertheless, a squeegee, bucket and a little window cleaner are a small price to pay out of the savings on gasoline.

"I am surprised how infrequently I go to the gas station. It's become a game to achieve as many miles as I can in EV mode," said Steve Wojtanek, a Volt buyer in Boca Raton, Fla. "I have made it my goal to drive as efficiently as possible and I am seeing the results, with more than 3,417 miles under my belt – of which 2,225 are EV miles."

Having bought his Volt in December, Wojtanek is averaging 122 miles per gallon and visits the pump about once a month.

The Chevrolet Volt is an electric vehicle with extended-range. On a fully charged battery and full tank, the Volt has a driving range of up to 379 miles. When battery is low, the Volt uses a gasoline powered generator to power the electric motor. Gasoline generates electricity more efficiently than it provides mechanical drive.

Typical electric driving range is 25-50 miles, dependent on temperature, terrain, driving technique and battery age. When the Volt's battery runs low, the generator engages to extend the range until the vehicle can be recharged.

"Today in the U.S., 80 percent of drivers commute fewer than 40 miles a day, making the Chevy Volt a great daily driver," said Landy. "We're hearing from customers like Steve Wojtanek and Gary Davis, who are seeing great daily results."