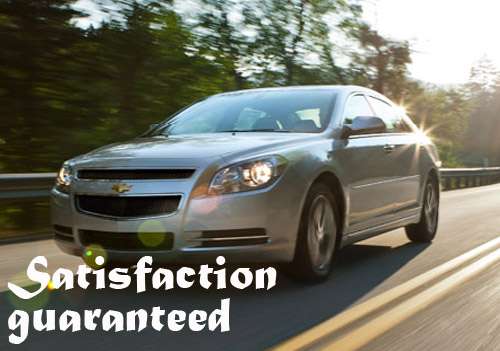 Chevy goes all in with money-back guarantee on new vehicles

In a relatively unprecedented automotive marketing move, Chevrolet has announced a money-back offer that guarantees new cars and trucks, in an effort to attract new buyers into the showroom.
Advertisement

General Motors made the announcement today, according to breaking news on the Huffington Post. Buyers can get refunds by returning their 2012 or 2013 vehicles for any reason up to 60 days after purchase until September 4.

It’s a proven point that when a company believes in their products, people tend to believe in them too. Chevy Marketing Chief Chris Perry says research confirms this concept.

When a major department store formerly in Denver (now known as Foley’s) changed their return policy to wide open – taking anything back for any reason, no receipt needed – their returns actually went down. That happened despite the fact that certain people returned old overcoats from other retailers, swearing they’d just bought them three weeks before. These desperate people were given refunds with a smile.

If people think you’re trying to rip them off, they will rip you off instead – it’s just part of human nature. If they think you are treating them fairly, that attitude disappears.

New customers will reportedly get the same discounted price as GM offers to employees of parts supply companies, plus any other discounts such as rebates or low-interest financing.

If they aren't completely satisfied with the vehicle, GM will refund the purchase price, however the returns can't have more than 4,000 miles or be damaged in any way.

GM previously made a similar offer during 2009, as they sought to boost sales upon emerging from bankruptcy protection.

Hyundai also offered at that time to let customers return vehicles during the first year if they lost their jobs, but that was not a money-back deal, they would just let you out of the loan.

Chevrolet would welcome a US sales boost from the guarantee. So far this year, 962,000 Chevy cars and trucks have sold, an increase of 6.3 percent over last year. However, the brand is lagging behind the overall rate of U.S. auto sales growth, up nearly 15 percent during the first half of 2012. This is despite brisk sales outside the US. GM sales are up only 4.3 percent in the U.S. so far, hampered by slow sales in the Cadillac and Buick lines.

Chevrolet sold a record 4.76 million vehicles last year, and marked its best first quarter ever with 1.18 million sales globally, but first-half annual sales totals won’t be out until Aug. 2.

The brand is also offering a no-haggle price promotion to clear 2012 models. New versions of their two top-selling vehicles are coming soon. The new Malibu sedans will start arriving yet this month, while new Silverado pickups will show up next spring.