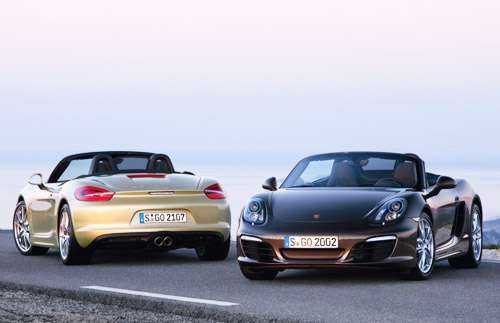 The Porsche Boxster returns for 2013 with longer, wider and more svelte body with a completely new undercarriage.
Advertisement

The open-top two-seater has an entirely new lightweight body with a longer wheelbase and a wider track. Larger wheels and electromechanical power steering significantly enhance the mid-engine sports car's performance and handling. The new Boxster also offers up to 15 percent greater fuel-efficiency than previous models.

Shorter overhangs compliment the longer wheelbase on the 2013 Porsche Boxster on which the windscreen has been moved forward. The fully electric top has been completely redesigned, no longer needing a convertible top compartment lid. The interior offers the more space reflecting the new Porsche line with a raked center console, which, originated in the Carrera GT along with improved ergonomics in all models.

The next generation sports car debuts in the classic trim levels of the Boxster and Boxster S, both powered by flat-six engines with direct fuel injection, further enhanced by electrical system recuperation, thermal management and a start/stop function. The base model's new powerplant delivers 265 hp from a 2.7 liter engine – 10 hp over its larger predecessor. The 3.4-liter engine of the Boxster S now delivers 315 hp, five more than before.

Both are coupled to a manual six-speed gearbox standard with the seven-speed Porsche Doppelkupplungsgetriebe (PDK) option available. Both Boxster models get the best fuel economy and acceleration with the PDK. Changing gears without interrupting power flow, the Boxster accelerates from zero to 60 mph in a somewhat unimpressive 5.4 seconds, while the Boxster S cuts expired time to a more respectable 4.7 seconds.

A Sport Chrono Package is offered as a performance enhancing option for the Boxster, adding dynamic transmission mounts for the first time. Another new feature is Porsche Torque Vectoring with a mechanical rear axle differential lock.