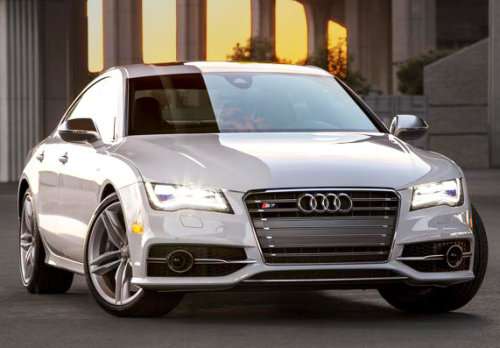 Since the average person spends over two hours per day in a vehicle, it’s no surprise they are becoming much more than simple conveyances – it’s even less surprising Connected World magazine wants us to know about cars like the 2013 Audi S7 that connect us to the global village best.
Advertisement

The 2013 Audi S7 today was named a Connected Car of the Year in the luxury category for its mix of safety, convenience, telematics and creature comforts.

This is hardly startling if you followed any of Audi’s customer profiles on YouTube. Torque News reported on composer and deejay Ryan Farish, who after creating music in his home studio, takes it to his Audi TT to review his work – because it has more speakers and better acoustics than his recording studio!

We also informed you how Audi partnered with Alcatel-Lucent to create an A8 model that can transfer data faster than standard 3G or DSL connections.

Now that technology is making it’s way through the line-up, naturally the 2013 Audi S7 features the acclaimed infotainment system Audi connect. Audi was the very first brand to offer factory-installed wireless Internet, enabling connectivity for up to eight devices. With Audi connect, the onboard Audi MMI Navigation system utilizes Google Earth maps and real-time SiriusXM Traffic information, to provide the most accurate and up to date data in establishing a route.

The system also features local, weather, news and fuel prices; Google Search for info on nearby destinations, including restaurant or hotel pricing and customer reviews. The proprietary myAudi Destination allows users to log on to Google Maps from anywhere and download up to 50 destinations to the navigator.

Though a V8, the TFSI brings progressive performance to S7 in a reduced displacement with higher output. The economy is further enhanced by Audi’s cylinder on demand system, while interior noise is dampened by active engine mounts and noise cancellation.

Other notable aspects include a rear sport differential, air suspension, and a 7-speed S tronic transmission.

Who knows, given this vehicle to put through its paces, maybe you don’t want to be so connected – but it’s there if you need it and that’s why Connected World wanted you to know.