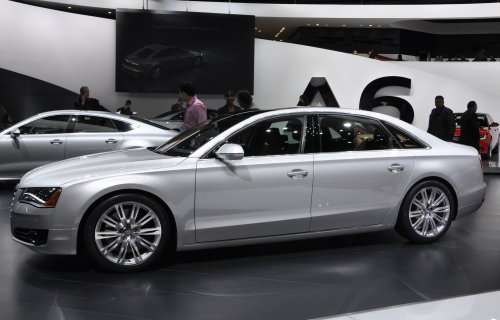 As more and more telematics are involved in automotive technology, the speed at which your car’s computer can download information grows in importance. Realizing this Audi has partnered with Alcatel-Lucent to create an A8 model that can transfer data faster than standard 3G or DSL connections.
Advertisement

Rupert Stadler, chairman of the board of management of AUDI AG, announced that LTE technology would be used in Audi's cars early in 2011. Mere weeks later, Audi and its development partner, Alcatel-Lucent, have presented a fully functional prototype.

To explain some of the terminology, 3G is an acronym for “third generation,” referring to the technology used by phones to transfer data. Long Term Evolution (LTE) is sometimes referred to as 4G, and was developed by a group called the Third Generation Partnership Project. LTE is the latest standard in the mobile network technology tree that produced the GSM/EDGE and UMTS/HSPA network technologies.

The Audi A8 L contains this mobile communications technology. LTE offers very high data transfer rates that can reach up to 100 Mbit per second. In comparison, a fast 3G connection offers about 14,4 Mbit per second. That makes LTE roughly seven times faster than standard 3G transmission.

“We will use LTE technology to extend our advantage in automotive networking and further consolidate the Audi connect strategy,” says Michael Dick, Audi Board Member for Technical Development, during the presentation of the prototype.

In the very near future this technology could be used to save lives.

After a serious accident, emergency response could establish a doctor's video call to help a passenger perform field triage upon an injured driver.

Nervous fathers could have a doctor present online as they help deliver their progeny – a few blocks short of the hospital.

Of course, your prom date's parents may know you're snuggling in Daniel's Park and may come looking for you two.

“For the times they are a-changin’…” sang Bob Dylan long, long ago.