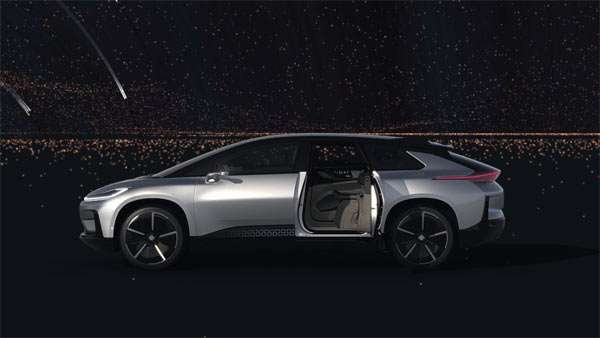 Faraday Future released 'a new species' of electric vehicle at CES yesterday which claims to have it all from blinding speed, luxury and futuristic tech.
Advertisement

The Faraday Future website has given some hint of a new vehicle recently, but it's not until now the FF91 has gone public. The immediate comparisons are going to be with Tesla in the performance/ sports electric market with the FF91 posting the equivalent of 1,050hp and can achieve 0-60mph in 2.39 seconds. This in comparison to the current Tesla Model S P100D in 'Ludicrous' mode which can do 0-60mph in 2.4 seconds. The upcoming Tesla Model 3 roughly the same in the performance stakes.

The unveiling of the vehicle and opening presentation promises many things from the company such as future wireless charging, driverless valet and aerodynamic antennas. The vehicle will also adapt to the driver, recognising them with all their individually settings, along with being fully autonomous. The FF91 should also have a 370 mile range, 'enough to travel from L.A. to Silicon Valley with miles to spare', said Peter Savagian vice president of propulsion engineering for Faraday Future.

Audience members at CES also had the chance to see an indoor drag race, comparing the FF91 to the likes of the the Tesla S P100D, with the FF91 being the fastest. However, not everything went to plan when the vehicle failed to drive itself a few feet during the presentation demonstrating their valet feature which can self parked the vehicle.

Last November Aecom, the company responsible for building the $1 billion Faraday Future factory stopped work and the the company has also had internal rumblings with three executives quitting. There has also been financial pressures with Mr Jia chief executive of LeEco who has invested in Faraday Future writing to his employees to say the company's finances were under pressure. During the CES presentation Nick Sampson senior vice president at FF referred to this area directly, 'Despite all the naysayers and the skeptics we will persist.'

So there are lots of promises for this vehicle, lots of tech., and an everyday vehicle and a performance vehicle all in one, so can the company make good on their promises for a proposed release of 2018? The obvious direct challenge will be against the Tesla model 3 and Model X when the FF91 is finally released, but Tesla have a far more firm foothold in the EV market with newcomers like FF having much more to prove when the vehicle is finally released.

The FF91 promises alot and with interests in electric vehicles on the increase every year, every manufacturer is getting in on the act which means FF will need to get their FF91 out on the streets as planned if they hope to make a dent in the EV market in the coming years. Currently, the FF 91 can be reserved for $5000, but no official final price has been released.