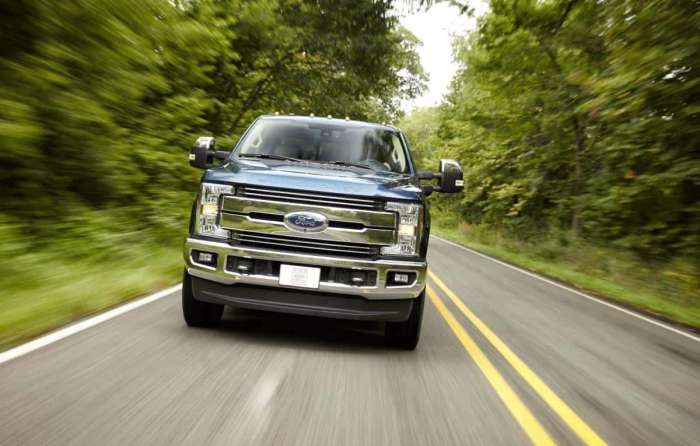 Some say that the auto industry has known about the “wobble of death” since the 1960ss, while others say it dates from the 1980s. Still, others state that manufacturers have known about it since the early 2000s. Who is right? Perhaps every person who makes a statement about the “wobble” is correct. The reason: it is common for vehicles with solid front axles. Which vehicles have those axles? Since the 1960s, the vehicles that have had those axles have been pickup trucks and SUVs (full-sized SUVs use a brand’s pickup platform), the hottest portion of the market.

Now, this might seem to be the limit of the issue, however, in researching this article for publication, Torque News checked several F-150 websites and it turns out that until 2013 -- not long ago for pickups which tend to stay on the road longer than cars -- the "wobble of death" was a big topic.

For example, last week Torque News discussed the Jeep “wobble of death” that has roiled sales of Jeep Wranglers. Fiat Chrysler Autos (FCA) keeps on saying they have the fix for the problem, replacement steering dampers. It might indeed make the problem disappear for a short time. However, the issue will return quickly as the bolt holes stretch out of round. Owners of Jeep Wranglers received help last week as a class action suit started. Suit Asks For Jeep Wrangler Buyback in "Wobble of Death."

In a second "wobble" lawsuit, William Lessin charged early this month that Ford knowingly sold heavy-duty pickups with the “death wobble.” He claims that the automaker has known about the defect in its vehicles for at least the last 14 years and has failed to take actions such as notifying consumers or warning customers of the problem. The suit came about the same time as the automaker recalled 1.3 million vehicles for transmission and suspension problems. Ford Recalls Pickups To Address Transmission, Steering

The suit links the problem to a defect in the pickups’ steering and suspension. The defect causes intense shaking, even under normal conditions.

Interestingly, though the F-150 has had similar complaints about the "wobble of death," the pickup line has managed to escape lawsuits, however, it may not have escaped recalls. As we have noted in our coverage of Ford recalls this week, there were 1.3 million 2013-18 F-150s recalled for tranny and steering issues, the same type of issues that owners have complained about for years. Indeed, the F-150 owners have pointed to many of the same problems found on their SuperDuty siblings such as bushings, ball joints, control arms and the like, all key parts of the steering system.

Lessin’s suit argues that the “Death Wobble” is typically triggered when pickups are traveling at speeds above 50 miles per hour with one of the tires hitting a dip, bump or groove in the road. It causes the vehicle to shake violently. The shaking can only be controlled by stopping or reducing speed.

“The Death Wobble is typically triggered when the class vehicles are traveling at speeds above 50 miles per hour, and one of the tires hits a groove or bump in the road,” Lessin argues in his Ford truck class action. “This causes a violent shaking of the vehicle, which can only be controlled by a sudden reduction of speed.”

The suit alleges that the defect may present itself as the abnormal wearing of several vehicle components. The wearing includes:

You have to wonder how FCA or Ford will defend the suits as it turns out that this problem is very common to vehicles with solid front axles. It has also been common on Ford's F-150 series of pickups. Indeed, the F-150 "wobble" starts under the same conditions as the SuperDuty problem and acts in the same manner. About the only thing that stops it is turning off the ignition. Does that sound oddly familiar?

What happens is that when a front end encounters a bump, dip, or stick -- some sort of jouncing object -- a harmonic incident sets up like as not in the F-150, F-250, and F-350. The harmonic rumble is then picked up by loosened components and manifests itself as the "wobble of death." Ford F-150 owners have complained on Ford F-150 forums of the same issues.
.
Ford’s F-250/350 line of SuperDuty pickups has faced this problem for some time. One SuperDuty owner complained that as the vehicle was being driven along at the speed limit, it encountered some rough road near a bridge. The road conditions caused the harmonic that kicked off the wobble. The wobble grew in size and strength to the point where the Ford SuperDuty F-250 was undrivable at any speed other than a stop. Getting to that stop turned out to be quite an issue and the owner was thankful that other drivers were able to see what was happening and were able to give the vibrating vehicle a wide birth. The owner asked a question at the end of a statement: “Why isn’t Ford doing more about the issue?” It is not unlike the complaints raised by Ford F-150 owners, one of whom asked, "Is there a fix for the "wobble of death?"

’Wobble Of Death.’ Has Owners Upset

It’s a good question because more than one statement about the issue concludes essentially the same way: why isn’t there a recall; why isn’t there more hubbub, why, why, why? (Perhaps the 1.3-million truck recall last week, will address F-150 owner concerns better than they have been addressed so far.) It is a good question since Ford claims to have had the fix for the problem for a long time. The Ford fix involves repairing or replacing some parts of the front end. For example, one driver had the bushings replaced, and that worked for a bit, but the ‘wobble” came back. Returning to the dealership, the dealer tried a different steering track stabilizer bar. Again, it was like aspirin. It was a temporary fix. One Ford SuperDuty was repaired three times in six months, and it still wobbled. Some F-150s have been repaired multiple times as owners have tried shims, as well as steering parts to fix the issue.

The SuperDuty fix was found by an independent Ford technician. He swapped out components until the real fix appeared. He found that he not only had to do Ford's fix, replacing the steering track stabilizer (steering damper), but he also had to:

.
Indeed, the last step proved to be the clincher for this problem. There has not yet appeared to be a final fix for F-150s as owners have replaced the bushings, tie rod ends, wheel alignment, balance, and other pieces and the "wobble" still exists. Some owners have turned to new shocks, as well.

As they say, it is not rocket science. Who knows, the F-250/350 fix may have been identified many times in the last 65 years or so, but, somehow:

In fact, according to a video that Torque News has found and is presenting, the major fix was found by the independent technician whose work culminated in a way to add caster to the front steering gear. His finding this fix was serendipitous (a happy circumstance).

The technician/YouTube Channel Host said that his shop found the answer almost by accident. The answer involved installing new steering parts that enabled the shop to increase the effective amount of caster in the front end. Caster is a function of steering. It involves adding greater steering angles to the front end. Normally, manufacturers allow only about one degree of caster adjustment in the steering gear. The shop found, after welding on new steering pieces, that when they increased the caster to three-and-a-half-degrees the "wobble of death" disappeared and the diesel-powered F-250 on which the steering parts were installed has been solid ever since.

The amazing part to us here a Torque News, as well as to others out there is that a diesel shop and parts supplier (BD Diesel) have found a way to cancel out the problem, while Ford keeps on using the simplistic steering damper fix. As to the F-150 issues raised by the million-truck-plus recall, we will have to see what owners say, the jury is still very much out on this issue.

If you have a comment or question, you can ask me via the comment lines at the bottom, I do answer every question or comment I receive. See you in the next story where I am discussing how to choose wheel offset for your Ford F150 and explaining tires.

LG's New EV Battery Plant Is a Welcome News for Tesla
Tesla Giga Berlin's New Hurdle: It's Not Only the Gov't, but Now Tesla Itself
END_OF_DOCUMENT_TOKEN_TO_BE_REPLACED