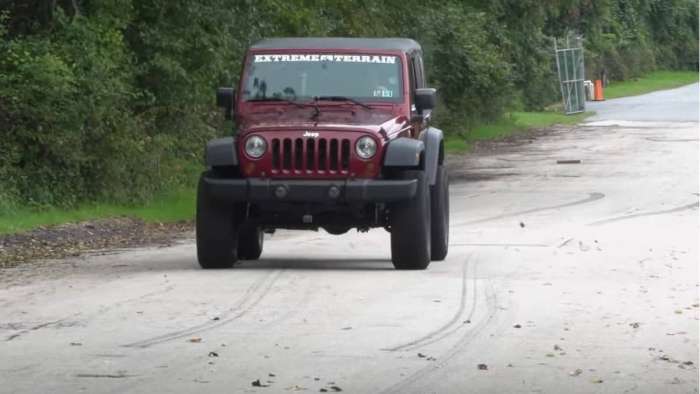 With the news this weekend that Fiat-Chrysler Autos has been sued due to the Jeep Wrangler "death wobble" issue that has been at the heart of many complaints for years, Torque News identifies the problem and solution.
Advertisement

Imagine you are driving on a local interstate, at the speed limit, when your Jeep Wrangler hits a rather large pothole, and the front end begins to wobble uncontrollably. For those driving those vehicles, it is not only incredibly nerve-wracking, but also very upsetting.

For example, there was a report of the grandparent who was cruising with a grandchild when the vehicle hit a huge pothole, and it began to wobble and vibrate. The wobble was so bad that it was tough to pull into the emergency breakdown lane. After a bit, the driver managed to wrangle things over to the breakdown lane, naturally quite upset. Then, there was the driver who noted his Wrangler hit another large pothole at 70 mph and a huge wobble-front-end-vibration began. The wobble-vibration was at its worst from 50 to 70, though it did remain a problem at lower speeds. Even at lower speeds, as the Jeep was wrangled over to the breakdown lane, the wobble continued. It took until the vehicle was shut down for it to stop.

So what is the problem? What causes “Death Wobble?” Among other things, it could be caused by:

Though FCA has made progress on some of its models, it is an exasperating situation that has finally led to a class-action lawsuit. FCA Improves Some Of Its Crossovers. This week, in a suit filed in U.S. District Court, the plaintiffs alleged that: “Rather than address it – or disclose its possibility and/or warn drivers at the point of sale – FCA simply claims that the ‘Death Wobble’ is not a “safety issue.” Further, the suit said that the wobble “can happen with any vehicle that has a solid front axle (rather than an independent front suspension), such as in the Wrangler.”

FCA said it hasn’t been served yet and refrained from comment on the suit’s allegations. The automaker did say, in a statement, “We note, however than any manufacturer vehicle equipped with a solid axle can experience steering system vibration and, if experienced, it is routinely corrected.”

According to the suit, the “death wobble” occurs because the solid front axle cannot absorb bumps and vibrations as efficiently as a vehicle with a front suspension that allows each wheel to move independently. It says in a solid front axle, the front suspension and steering components can be jarred out of equilibrium. Drivers experience an "uncontrollable side-to-side shaking of a Jeep’s front-end steering components and – by extension – its steering wheel," the suit alleges.

The suit accuses the automaker of offering a “Band-Aid fix.” The fix involves replacing steering damper if the vehicle is under warranty. This week’s action was for the vehicle owner, Clair Reynolds of New Jersey. She maintains that the damper in her Wrangler was swapped three times in six months and the problem persists. The suit claims the problem will return and that the only way to repair the problem properly is substantial suspension revisions and repair. Reynolds says that despite the changed steering dampers, the front end still shook. Reynolds vehicle is a 2018 Jeep Wrangler Unlimited Sport 4 X 4.

Reynolds suit is about a problem that has plagued the Wrangler for years. Drivers have complained to the National Highway Traffic Safety Administration (NHTSA) for years. For example, one unidentified driver told the agency that:

“I first experienced the ‘DeathWobble’ within a year or so of purchasing my new 2016 Jeep Wrangler.” [It was] “very scary (seems to happen on rough spots in the road, traveling at 45 or higher). The front end was shaking so badly that I thought I had a flat tire, or that a wheel had fallen off. It has now happened at least eight times, and I no longer drive on any interstate highway.”

’Death Wobble’ Has Been Issue For Seven Years at Jeep Wranglers

Safety advocates have been pushing for an NHTSA or Congressional action since 2012. “The Jeep ‘death wobble’ is a serious safety issue that must be evaluated by NHTSA,” the Center for Auto Safety (CAS) wrote in 2012. The CAS, in a letter to former NHTSA Administrator David Strickland, stated: “It is also representative of the problems involving a lack of transparency and access to reliable repairs that are present in other safety and defect cases.” NHTSA had no comment. Wranglers Have Had Their Share Of Recalls.

The lawsuit also seeks punitive damage for “FCAs knowing fraud that put driver and members of the public nationwide at risk.” It also calls for FCA to order a recall. FCA Has Had A Wide Variety Of Recalls.

brian wrote on July 13, 2019 - 5:07pm Permalink
my 2015 jeep purchased new with dealer installed lift has 28000 miles on it and severe death wobble ,dealership denies the issues and are totally useless,
Wendy Davis wrote on August 12, 2019 - 10:02pm Permalink
I have had the same problem with my 2015 Rubicon. Took it in multiple times, both in and out of warranty. Was told to get different tires than the ones that were OEM!!! Those tires were not meant to drive on freeways. WTF??? I replaced the front tires that had uneven tread about 9 months ago and the problem has come back, worse than before.
Hannibal Lockhart wrote on July 1, 2020 - 8:10am Permalink
My 2018 wrangler sahara with 20000 miles on it and never been on a trail all highway driving. I've had my jeep in the shop two times for the death roll. Both times they install a damper shock, counting the original shock I have had three damper shocks installed and still not had it fixed.
Candice wrote on February 16, 2021 - 7:46am Permalink
My jeep is a 2019...with 5k miles and no modifications and has never been off road...it has severe uncontrollable death wobble...it’s at the dealership now getting fixed..I had no idea what it was until after I dropped it off...they said nothing to me about the issue when I described it...I figured it out when I spoke to my brother who lives across the country in Colorado who ALSO had the issue..what’s the likelihood of that? I was NEVER notified by jeep that this is a potential issue...
Robin wrote on March 4, 2021 - 5:27pm Permalink
I have a 2019 Wrangler that has just started to periodically do this. I took it to the dealer who kept it for three days. However, since they cannot "duplicate" the issue, they refuse to fix it, despite me telling them about the information I located, the service bulletin by FCA and the fix. What can I say to have the dealer listen to me and actually fix the problem. I am going to try a different dealer.
Tamela Sanderson wrote on November 4, 2020 - 11:39am Permalink
2018 Wrangler Sahara Limited.. only driven on freeway, no aftermarket improvements.. experienced the death wobble a few months after purchasing it new . Took it in they said they repaired a recall on it ( why they would y have replaced it prior to me driving it off the lot I’ll never know) ... the repair didn’t fix the problem, took it back.. the service manager drove it and said he could t recreate it... basically I was crazy! I took it back recently 44k miles now and they’re telling me it’ll be a $1100 repair for the problem I took it in for originally... but the miles kick it out of warranty. Imagine that!!! I’m soo pissed off.. I’m looking to seek justice for this! It’s a KNOWN. Problem... they strung me along... enough to magically come up with a what the service manager is calling a 200% guarantee fix... for the low price of $1100.
Jeanette Elaine... wrote on November 30, 2020 - 3:36pm Permalink
I just experienced the death wobble a few weeks ago on what became a VERY lengthy trip from south central Iowa to northwest IL. I was moving with my dog and 2 cats secured in their sleepy pod carriers in my 2000 Jeep Wrangler, following the driver of the moving van when only 20 miles into the trip I hit a bump and experienced the most terrifying ride of my life! For 8 hours, I was fearing and fighting the next bump and traveling in 3-4 lanes of traffic where I couldn't pull off. My cats were screaming I could barely control my jeep or even focus on the traffic around me. It happened multiple times until I kept it below 48mph. Running late, I was forced to drive at night and dealing with it. I had never heard of this and freaked out, fearing I was going to cause a serious accident, killing multiple people! How do I join the class action case? It is my only vehicle and otherwise in good shape as it sat for nearly 7 years with only a few short outings. Elaine
Jon wrote on December 5, 2020 - 8:54pm Permalink
My 07 at hey speed is very dangerous. Didnt know of this till after I bought it. Jeep should make this right
Michael wenzel wrote on March 11, 2021 - 2:33pm Permalink
what law firm handles this or do I have to get my own?

LG's New EV Battery Plant Is a Welcome News for Tesla
Tesla Giga Berlin's New Hurdle: It's Not Only the Gov't, but Now Tesla Itself
END_OF_DOCUMENT_TOKEN_TO_BE_REPLACED