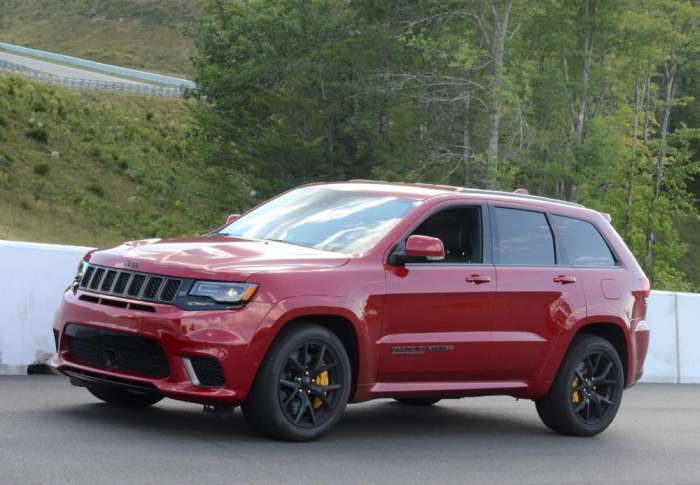 Some people on social media seem to think that the recent recall of the Jeep Grand Cherokee Trackhawk pertaining to the floor mats is a joke, but it is a real recall that presents real world problems for owners of the 707-horsepower SUV, along with the 475 horsepower non-Trackhawk SRT models.
Advertisement

Last week, FCA announced a recall of the Jeep Grand Cherokee SRT and the Jeep Grand Cherokee Trackhawk from the 2018 model year over a concern that the “accelerator pedal may be trapped by the floor mat”. It quickly traveled around the internet and in many cases, people thought that it was a joke or yet another recall that really posed no real world risks.

However, this is a legitimate recall for a problem that owners have encountered with both the 475 and 707 horsepower Jeep Grand Cherokee models, and as the recall notice suggests, the floor mat can prevent the accelerator pedal from returning to the idle position when the driver lifts. As a result, two of the world’s quickest, fastest and most powerful sport utility vehicles have the potential to go fast without the driver’s input.

Route of the Issue
Thanks to hidden safety issues from a variety of automakers over the past decade, the automotive industry is in the Golden Age of Recalls. Lawsuits against Toyota and General Motors have made it clear to every automaker that no safety risk is too small, so literally every problem discovered with a vehicle has the potential to become a recall – even in the case where there are no real world examples of the problem occurring.

When I first read about this recall, I figured that this was another one of those recalls for an issue that had been discovered in intense internal testing, so it poses no real threat on the open road. Once I started speaking with Jeep SRT and Trackhawk owners, I quickly learned that this is a problem that owners have experienced.

It seems that the driver’s side floormat can shift around a bit and when it does, it can bunch up in the area between the firewall and the accelerator pedal. If a driver floors the high performance Jeep, this accumulation of floor mat material can effectively jam the accelerator down against the firewall, leading to the dreaded unintended acceleration.

Unintended acceleration was a major issue for Toyota about a decade ago as there were countless cases of their vehicles speeding up on their own, often leading to accidents and, in some cases, deaths. As a result, all sorts of new high tech safety features went into place and those features likely play a role in the fact that there have been no reports of accidents or injuries stemming from this Jeep recall.

While the Jeep accelerator pedal could get stuck against the floor mat, the Grand Cherokee has a brake override system that immediately ends the acceleration process. In fact, in speaking with owners who have experienced this stuck accelerator issue in their Jeep SRT or Trackhawk, as soon as they were aware of what was happening, they hit the brakes and the system functioned as designed – immediately killing the throttle and allowing the driver to safely clear the area around the pedal.

On top of the fact that the brake override system will prevent any extreme acceleration, owners can prevent this issue altogether by removing their floor mats or by making sure that they are always in the right position, smoothed out along the floor of the vehicle.

Simple Fix
The fix for this problem is as simple as you might expect. FCA is replacing the troublesome floor mats with a piece that won’t bunch up and affect the movement of the accelerator pedal. That swap will be done free of charge and owners can expect the recall to formally begin on or around December 18th, 2018. Owners with questions can contact Chrysler customer service at 1-800-853-1403 with reference to recall campaign UB3.

In the meantime, if you have a 2018 Jeep Grand Cherokee SRT or Trackhawk, pull out your driver’s side floor mats until you get into the dealership for repairs.

Lori J. Mendenhall wrote on May 6, 2020 - 9:24pm Permalink
I have spent thousands of $$ trying to fix the death wobble on my 2004 Jeep Wrangler. I am trying to sell it, as I gave up and bought a Toyota.
Dave Snyder wrote on October 31, 2020 - 9:33am Permalink
But yet they won't recall the gas tank skid plates because they rust out because of a shit design. Jeeps are complete garbage since Chrysler bought them