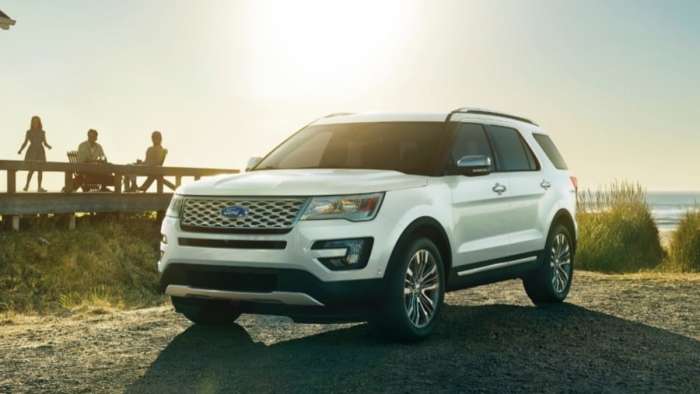 Why Ford is Recalling 1.3 Million of Its Most Popular Vehicles

Ford is issuing four recalls for some of its biggest sellers. Some Ford Explorer drivers have reported suspension issues. Some F-150 truck drivers have had transmission problems.
Advertisement

These are the types of problems that infuriate auto executives. They are trying to focus on the future but first must straighten out a quality issue from the past. The first recall is a huge one on one of the company’s top sellers. Ford is recalling 1.2 million Ford Explorers. The vehicles are from 2011-2017. Nearly all of the affected Explorers are from the U.S. Another 28,000 were sold in Canada and 1 was sold in Mexico.

There is a possibility that the rear suspension could have a problem in extreme circumstances. According to Ford, “A fracture of a rear toe link significantly diminishes steering control, increasing the risk of a crash.” One customer reported hitting a curb after the toe link broke. Ford is not aware of any injuries because of the rear toe link fracture issue.

Ford says that the vehicles that are involved were built at the Chicago Assembly Plant from May 17, 2010 to January 25, 2017.

The recall for 123,000 2013 Ford F-150s is particularly maddening for everyone involved. Ford is recalling the 2013 F-150s with 6-speed automatic transmissions. The F-150s having transmission problems have either the 5.0-liter or the 6.2-liter engines. Ford already fixed these vehicles once but the software fix didn’t solve all the problems. Ford is going to update the software again. Apparently, there is still an issue that could allow the transmission to downshift into first gear without warning. Although Ford is not aware of any accidents or injuries, it wants the downshift danger fixed once and for all. The original recall was reference number 19S07, the new recall is reference number 19S19.
This recall affects 107,850 trucks in the U.S. and another 15,200 in Canada. The trucks were built at Dearborn Assembly from May 7, 2012 until October 27, 2013, and also at Kansas City Assembly from April 18, 2012 until November 18, 2013.

Ford is also recalling approximately 4,300 Econoline Vans with a 5.4-liter engine. The vehicles could lose power and quit moving. Some of the affected vehicles may be equipped with a school bus or ambulance package. Most of the problems have happened while the driver attempts to accelerate after stopping. Ford says it is unaware of any accidents but is very concerned that ambulances not be delayed or that school buses never be at risk. The Ford reference number for this recall is 19S20.

Recalls for Canada Only

Ford is also recalling about 12,000 vehicles but only in Canada.
Ford is recalling several different models for the rear suspension toe link fracture issue. The vehicles were manufactured in the U.S. but were sold in Canada.

Ford is issuing a safety recall in the Canadian provinces of Alberta, Manitoba and Saskatchewan for select 2010-17 Ford Taurus, 2009-17 Ford Flex, 2009-15 Lincoln MKS and 2010-17 Lincoln MKT vehicles. Some of these vehicles operated in these Canadian provinces may experience a fractured rear suspension toe link. A fracture of a rear toe link significantly diminishes steering control, increasing the risk of a crash.
Ford is aware of one report of a crash with minor injuries related to this condition in Canada.
The fix is just like in the U.S. The dealers will replace the left and right-hand rear suspension toe links with new forged toe links. The Ford reference number for this recall is 19S18.

Owners should be contacted by Ford but you can also check to see if your specific vehicle is involved by checking with the National Highway Traffic Safety Administration.