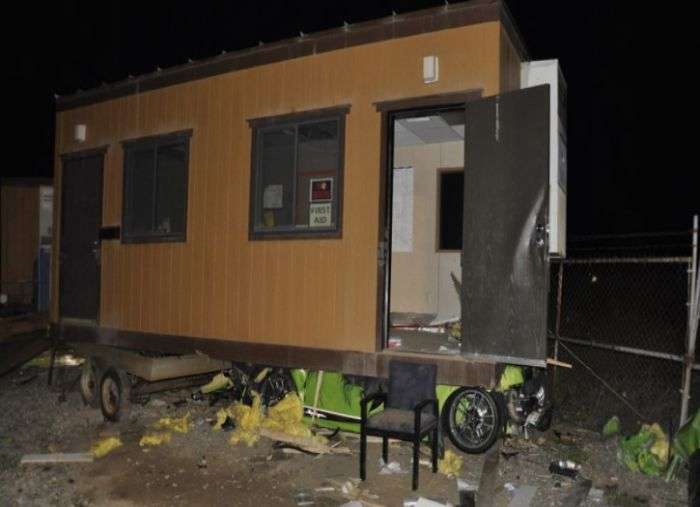 There's an old saying that the Lord protects babies, fools and drunkards and it looks as if there was more than a bit of overtime put in recently as a driver managed to stuff a Lamborghini Gallardo Superleggera in a place it truly didn't belong.
Advertisement

If there’s one thing I like, it is when an old saying hits right on the nailhead. For instance, there’s an old saying about the Lord watching out for babies, fools and tipplers. So, whoever was upstairs watching over a pair of Californians recently certainly earned their pay for the night.

It seems that one Cesar Rodriguez got more than a little toasted late one night – okay early in the morning – and he seems to have done some “daredevil” driving. Some might call it drunk driving, but, we’ll let the courts figure that one out. Police charged the 31-year-old with drunk driving.

To put some perspective on the whole thing. It began at sometime before 2 a.m. when Rodriguez and his unidentified passenger entered the Lamborghini Gallardo Superleggera and drove around Costa Mesa, Calif. Sometime in the early hours of that particular Saturday, Rodriguez, probably sufficiently under the weather to do something crazy, lost it and wedged the 560-horsepower supercar underneath a construction trailer.

It was horrendous. Indeed, it’s likely that when police arrived to look at the crash site, they probably expected to find two humans a lot worse for the wear. Typically, you would have expected some part of the Lambo to have survived the crash, but, investigators found everything crammed underneath that trailer, leaving the $250,000 supercar in pieces.

Here’s the weirdest part of all, where was the passenger?

Here’s the weird part. Instead of recovering anything grizzly requiring blotters to pick up, they found Rodriguez, slightly injured. His passenger just walked away from the crash and went home, found two hours later with minor injuries.

The information appeared in an Instagram post by the police department. It did take the police about 45 minutes to get the stuck supercar pieces out from under an unstable box surrounded by live wires. Much of what this report is speculation; the police have yet to release any further details.