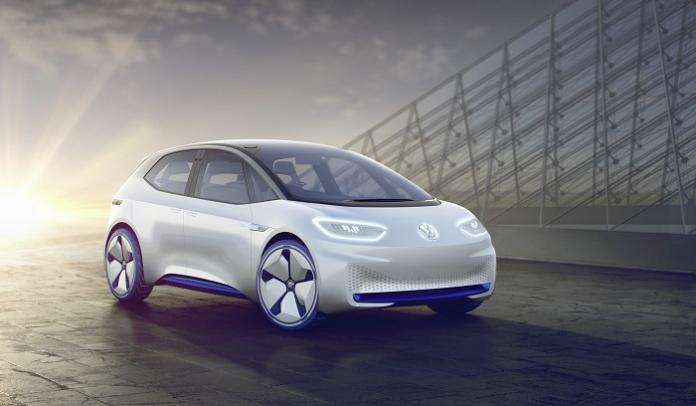 VW sets sights on Tesla’s Model 3 with its I.D. series

Volkswagen's marketing campaign for the I.D. electric series is becoming clear as the automaker has slated the I.D. hatch, Crozz and Buzz to take on Tesla Model 3.
Advertisement

Although making and selling vehicles is far from easy, when you are essentially the de facto market leader because there are no other competitive electric car manufacturers out there, it does make moving product straightforward.

This is the situation that Tesla Motors finds itself in today. With deliveries of their lower-cost Model 3 just beginning and a backlog of orders in the vicinity 300,000 vehicles, Tesla should be one happy camper. On paper, it looks as if the automaker is sitting in the catbird’s seat.

However, as they say, “uneasy lies the crown…”, which is to say that Tesla has looked into its rearview and it has seen hints of lots of competition that should ramp up quite quickly. It’s not that Tesla hasn’t had a form of competition. In the more than half-a-decade that it has been selling its upscale Model 1 models, Tesla has faced some competition from hybrids (electric-gas car). Indeed, Toyota’s Prius hybrid has sold more than 3 million vehicles since its introduction in 2002. And, other automakers – Honda, General Motors, for example – have also been in the mix.

Those vehicles were not strictly electrics, though, when their batteries were up to charge, the operated as electrics. The picture is rapidly changing.

Every automaker is making or has made the commitment to electrics. For example, just the other day Volvo said that by 2020 it would be out of the gasoline-car business, concentrating instead on electric sales. GM has also stated that it is committing heavy-duty resources to electrics. Its Chevy Bolt and Volt are only two examples of the commitment the number one domestic automaker in the U.S. has made.

Volkswagen stung badly by the Dieselgate scandal, has made a significant commitment, as well, to electrics. According to statements made by VW executives during the scandal, VW, as a way of making amends, has committed itself to produce 30 electric cars by 2025. Part of that effort is the ID concept series that debuted at last year’s Paris Motor Show. According to reports that have been circulating this week in Automotive News and Electrek, the ID series is set to be VW’s Tesla slayer.

In news conferences at the show, VW said the ID line would eventually consist of three models, a hatchback, an MPV and a crossover. The hatchback will be the first ID model on sale when it arrives in 2020. And, when it finally comes, VW’s price point should be a lot less than Tesla’s Model 3.

Specifically, the final price of the VW I.D. hatch will be on the order of $7,000-$8,000 less than the Model 3, Tesla’s low-cost model, according to VW chief strategist Thomas Sedran. Sedran spoke at the Automobil Forum in Germany. This puts the price of the all-electric hatch in the vicinity of $28,000. VW discusses I.D. hatch strategy.

Clearly, VW has Tesla in its sights as the automaker prepares for its new electrics. The electrics include the I.D. Crozz, a crossover and the I.D. Buzz, a minivan concept (MPV). VW is quite confident that it will become the market leader in electrics.

Herbert Diess, in an interview with Automotive News, told the publication that they believe VW is “the company that can stop Tesla because we have abilities Tesla doesn’t have today.” For instance, VW owns a dozen brands and has a huge advantage regarding scale.

One of the models on which VW is placing its hopes is the I.D. hatch concept that was the featured debut in Paris. Equipped with a 168 horsepower electric motor, the hatch can hit 62 kph (60 mph) in under 8 seconds. Tesla’s Model 3 is believed to achieve 60 (62 kph) in under 6 seconds. The Model 3 is Tesla’s entry level model. The Model 3 will have a range of at least 215 miles on the EPA cycle. However, VW, using the New European Driving Cycle, lists the range of the I.D. hatch between 249 and 373 miles. In the real world, both vehicles are expected to have the same range.

No timetable for U.S. rollout

While there is no timetable for a U.S. rollout, VW plans to have its 30 electrics rolling on public roads by 2025. The automaker has indicated it would like to sell 2 to 3 million electrics by that year. That figure is roughly 25 percent of its sales projections.

Pyedc wrote on July 18, 2017 - 1:15pm Permalink
The problem with VW is that the ID car looks atrocious. Why can't car manufacturers just make a normal looking electric vehicle? Tesla's Model S and Model 3 are the closest to come to that, although it's sort of sporty / luxury. But why do other manufacturers try to make their electric vehicles look "edgy" or "futuristic"? They look like crap? Just look at the Prius, the Bolt EV, BMW's electric bubble car, the leaf. Just make a normal looking EV and people will buy more of it!