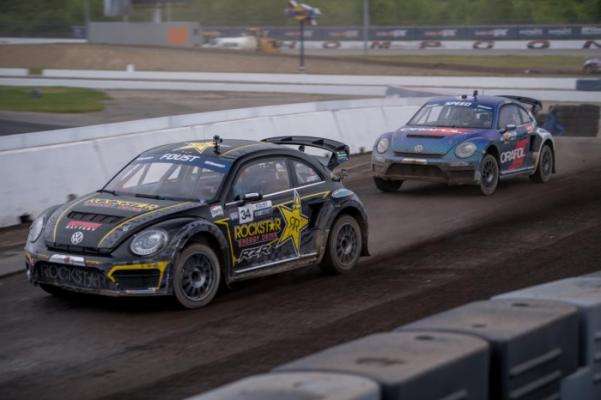 As the Red Bull Global Rallycross pulls into Ottawa for this weekend's proceedings, VW Andretti team drivers Scott Speed and Tanner Faust look to improve on their so-far successful season. At the moment, Speed is leading the championship point hunt, followed by Faust.
Advertisement

As the Red Bull Global Rallycross train goes international this weekend with a stop in Ottawa, Canada, the Volkswagen Andretti team looks to make its mark. In its last outing in Thompson, Conn., the team’s Beetle GRC cars proved fast. They earned three podium finishes during the doubleheader weekend.

Both Drivers Have Frustrations In Last Outing

Tanner Foust, whose No. 34 Rockstar Energy Drink Beetle GRC, handily won the first of two Finals during the New England weekend and took two Semi-Finals. He was easily winning when he lost a wheel three laps from the end and ended up sitting out the finish.

“I’m ready to get back on the track here in Canada to try to make up for lost ground from the bad luck we had at the last race,” Foust said. “If we can replicate the same sort of speed, I think we’ll be in great shape for this race.”

Arriving in Canada, the team finds itself facing a tight .762-mile course on the grounds and runways of the Canada Aviation and Space Museum. The event is one of many celebrations of Canada’s 150-year history taking place in the capital this year.

’Canada Has Some Of The Biggest Racing Fans

“Canada has some of the biggest racing fans, so I’m really excited to get the chance to bring our awesome sport up here this summer,” said Speed. “This season has produced some really great racing so far, and I am glad we get to share that with a new audience in Ottawa.”

Speed is hoping to stretch his lead with a strong showing in the Canadian venue. He is currently atop the points leader board with Foust hoping for a few good results this weekend so that he can close the gap with his teammate.

A doubleheader, like the Connecticut event, the Red Bull Global Rallycross will air this weekend on NBC. Race One will be broadcast at 10 p.m. (ET) Saturday. Race Two will air live on NBC at 4 p.m. Sunday.