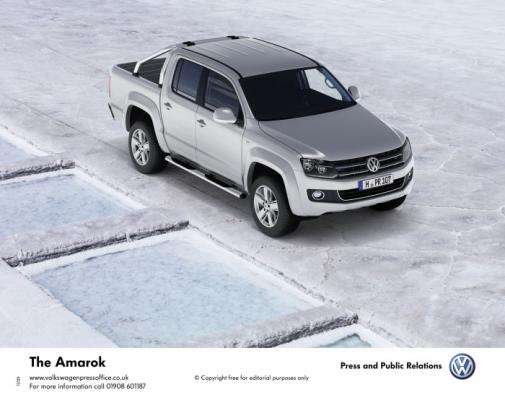 Though there have been rumblings that Volkswagen's mid-sized pickup was headed for the U.S., that is not the case, says the automaker. Meantime, the overseas aftermarket provides VW Amarok buyers with a wide variety of canopies, window screens and tints, like the U.S. aftermarket. And, for the same reason, to allow buyers to tailor their pickups to make them unique.
Advertisement

Indeed for 2017, Volkswagen’s Amarok has undergone a major revision with new, more angular lines, a more aggressive stance and a new, more powerful V-6 turbodiesel powerplant. The refreshed Amarok has been greeted enthusiastically by pickup truck enthusiast publications and websites. Customers have been enthusiastic as well, finding Amarok's upgrade refreshing and exciting. One other thing they have found exciting is the ability of the aftermarket to not only provide solid upgrades to Amarok, but to also help customers make their trucks unique. For example, VW Amarok has ready aftermarket partners like CV Solutions, which provides quality add-ons. In fact, Volkswagen was aggressively targeting Toyota's light truck market in Latin America since 2012.

It is easy to see why this is true. Look at the engine, for instance. Volkswagen has dropped four-cylinder engines from its pickup lineup. Instead, the automaker tweaked the 3.0-liter direct injection turbocharged engine so that it cranks out 221 horsepower and 406 pounds-feet of torque. From a performance standpoint, the upgraded powerplant now turns a 7.9-second 0 to 100 kph run (62 mph), mated to an eight-speed automatic. There’s also a six-speed manual available.

Built with traditional body-on-frame construction, the Amarok sports fairly standard front and rear suspension setup. Up front, the suspension is a double-wishbone, while the rear features rear leaf springs. The pickup is available in two cab styles, single and double. The single cab is like a work truck while the double cab features four doors and seating for five. It is also available with two pickup bed styles, standard and extended. The extended bed adds 16 inches overall to the Amarok’s roughly 205-inch length.

The 2017 Amarok features upgraded infotainment and electronics as well as parking assist, four 12-volt outlets and standard Bluetooth connectivity. And, while VW provides lots of options to let you tailor your pickup to your tastes, there are other, aftermarket firms, which provide items that either allow you to do even more. Take Australia’s CV Solutions, for example. Their X-Series truck bed canopy keeps the things you tote dry, safe and secure. Take an item you may not think of consciously that is of fundamental importance, window tinting. Their window tinting is dark enough to keep prying eyes out, yet light enough to keep you from driving safely.

Like pickups in other markets, the Amarok combines comfort with a quality ride and handling so that offroad or in more standard driving situations, it maintains its composure.

If, after reading this piece, you want your own Amarok, but you live in Kankakee or Los Angeles, you are out of luck. Mark Gillies, a senior product spokesman for Volkswagen, was asked why the automaker didn’t sell mid-sized pickups in the U.S. market. His answer was honest. In an email, Gillies said VW found that “small trucks don’t sell.”

Honestly, he’s quite right about the sales picture. Indeed, a look at U.S. mid-sized pickup sales confirms his comment. Through April, U.S. automakers had sold a total of 150,950 mid-sized pickups. In total, that sales figure represented an overall 36.5 percent dip in mid-sized truck sales over the year before. The models represented by that drop include Toyota’s Tacoma, Nissan’s Frontier and Chevy’s Colorado/GMC’s Canyon. Four of five major mid-sized pickups have had their sales slip.

Of the types noted, only Ridgeline reported sales up for the first four months of the year. Why has Honda bucked the trend? No one has a complete answer. However, it may be that Ridgeline is brand-new to most buyers, though it sold until 2011 when Honda put it on hiatus. Ridgeline is a brand-new model available now, after a four-year hiatus. Perhaps it is because it is new and represents something that’s different, unique if you will.

Maybe now you can understand why VW’s Amarok won’t appear here. As Gillies noted, VW won’t take a chance in a market where mid-sized pickups have a tough time selling. Yes, the automaker will take a chance, and does, in the rest of the world. Local markets have greeted VW’s decision with support and a booming aftermarket which allows owners to make their Amaroks unique.