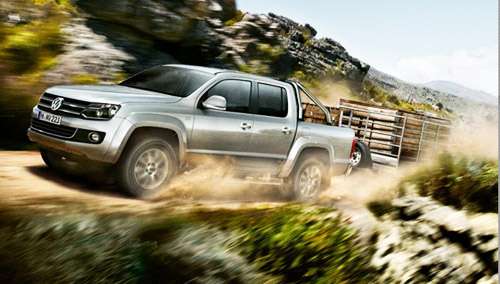 Volkswagen has designs on the small but rapidly growing Latin American market for light commercial vehicles, such as light trucks and commercial vans in Central and South America as well as the nations of the Caribbean.
Advertisement

From the Volkswagen Auto Group's Latin American headquarters in Miami, the German auto giant is planning the conquest of the lower latitudes south of the U.S. border, according to a recent post on MiamiHerald.com by Joseph A. Mann Jr.

“Toyota has been the owner of the light commercial vehicle market in Latin America for many years, but we are making a major effort to gain market share,” reportedly stated Fernando Badia, vice president of operations at the site, in charge of efforts to encroach on the territory of its Asian and American competitors.

This fearless charge into the valley of sales is lead by Volkswagen’s four-door, diesel-powered Amarok pick-up truck, considered a competent combatant in the scrimmage for market share against Toyota’s Hilux pick-up.

The various models of the Hilux are not available in the U.S. but sell well in South and Central America. However, the pick-ups were once sold in the U.S. under different names, but nothing the company sells in the U.S. today has any DNA from the Hilux series.

In Latin America Toyota also sells the HiAce, which can be configured as a minivan, commercial van, pick-up, taxi or ambulance, along with 4runners and RAV4 models. Toyota sold 101,000 light trucks, in the countries VW is currently targeting, during 2011 not including SUVs.

VW is also sending four other light commercial vehicles into the fray – in the form of the T5 van, the bigger Crafter commercial van, the Touran-derived Caddy and the smaller Gol-based Saveiro.

Since locating a Latin American aimed regional office in Miami during 2009, VW Commercial Vehicles has worked to establish a functional group of importers, retailers and service providers throughout the expansive region, beginning with the existing VW dealership network. Introducing the lineup of light trucks and commercial vehicles, they have boosted group sales to nearly 4.5 percent of the market, according to Badia.

VW’s best performance so far has been in Mexico, Chile, Colombia, Uruguay and Peru. Their top seller is the Amarok light truck, a pick-up fabricated in an Argentine plant in General Pacheco, a city in Tigre County, in the province of Buenos Aires.

Though only slightly over a third of the U.S. market, 5.7 million vehicles were sold in the region last year. VW thinks it can foster significant growth in light trucks and vans – especially as most of these vehicles have variants attractive to families and non-commercial uses. Even though the market in Latin America is currently growing more slowly than it recently has, as new businesses emerge in both urban and rural areas, VW sees opportunity as dispensable income increases.

“There are tremendous opportunities,” Badia said, citing Chilean and Peruvian mining companies who need light trucks in addition to heavy commercial haulers. Major industries like farming, coffee production and fisheries, not to mention oil and gas production, also need light trucks. “And small businesses are being established all over the region. Our job is to reach these new customers.”

An Argentine former industrial engineer, Badia, oversees efforts in 21 countries of Latin America, except Argentina and Brazil, where separate marketing efforts are underway. Audi shares the Miami regional headquarters with the VW brand and sells their passenger cars in the region.

It is a hard fought and highly competitive automotive market in Latin America across all segments. General Motors captured a full 8.8 percent of the market last year, selling almost 1.1 million Chevrolets, as the leader in total sales, but with stiff competition from Ford, Toyota, VW, Chrysler, Fiat, Nissan, Honda, Hyundai, Kia and now, Chinese imports.

VW Commercial Vehicles has had a presence since 2007, but this marks a new and aggressive campaign to gain market share.

It was up to Badia, himself, to convince established outlets to enlarge showrooms and services to incorporate new products, as he traveled from one dealer to the next, meeting the people who sold VW’s passenger cars in the region. Badia was also responsible for finding new investors and entrepreneurs to create new dealerships.

“Volkswagen was perceived in the region as a metropolitan passenger car,” Badia said. It created a challenge to promote the new vehicle line and persuade potential investors it would mean increased sales and profits, especially in rural areas, where customers are underserved and where rewards are not as easily envisioned.

VW offered marketing and promotional assistance, as well as incentives, to those willing to invest in the brand, and simultaneously trotted out a massive media campaign in the region. Five Amaroks drove from Argentina to Mexico, visiting dealerships on the way, to demonstrate the brands entrance into the battle for market share. They entered the Amarok in the Dakar Rally, along with numerous other publicity events.

“We’ve invested over $6 million a year to promote our vehicles,” Badia added.

So far Toyota is reportedly nonplussed over the new combatant in the battle for market share – they are doing pretty well in a market so competitive it can’t get much worse. They’ve already sold 23,000 light trucks in the first quarter of 2012, well on the way to the 101,000 retailed last year.

Nevertheless, VW is pleased with the effort, having doubled unit sales with Amarok leading the charge. The number of importers of VW’s light trucks has blossomed to 22 from three in 2009. Dealer showrooms now stand at 287, up from 32 during the same time frame. Another 36 Latin American outlets are upgrading to sell Amaroks among other VW light trucks and vans.

Badia concluded saying Nicaragua along with Trinidad and Tobago come next in the brand’s strategic plan for the region.

Tsingshan's Threat to Tesla: EV Maker Is In Battery Crosshairs
Tesla-Funded Research Reveals One of The Biggest Mysteries of EV Battery
END_OF_DOCUMENT_TOKEN_TO_BE_REPLACED