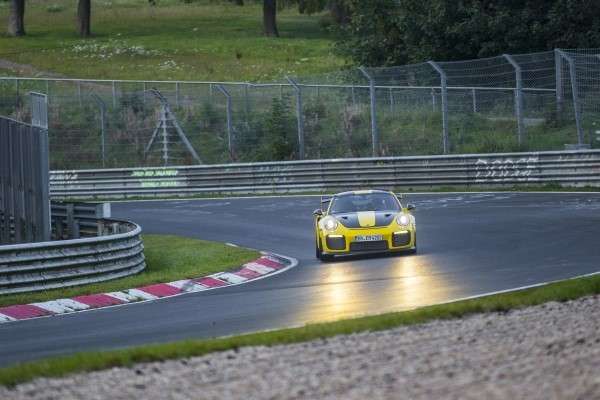 When Porsche set out to wring out the 911 GT2 RS Coupe on the Nurburgring, a demanding and unyielding track in northwestern Germany, they had a certain lap time in mind. When the smoke had settled, though, they found they had not only beaten the time but also had decimated it by nearly 20 seconds.
Advertisement

It is official, the Porsche 911 GT2 RS is “not only the most powerful but also the fastest 911 model ever built.” The comment comes from Frank-Steffan Walliser, head of motorsport and GT cars for Porsche AG.

His comment comes after Porsche set a new record lap for street-legal sports cars on the 12.8-mile Nurburgring-Nordschleife (20.6 km) with the GT2 RS. Run Sept. 20. The best lap time was 6:47.3, a number that surpassed every expectation and then some.

Walliser said, in an interview, that when the development process started, “we set ourselves a lap time target for the GT2 RS of less than 7 minutes and 5 seconds. The credit for beating this target by 17.7 seconds goes to our development engineers, mechanics and drivers, who demonstrated an exceptionally strong team performance.”

The record lap was not a single occurrence. Larz Kern of Germany and Nick Tandy of Great Britain broke the previous record for the street-legal sports car – 6:52.01 seconds immediately and then proceeded to lap the track in under 6:50 minutes on five separate laps in a second GT2 RS with a different driver.

Andreas Preuninger, director of the GT model line, said, “It’s not just the record time achieved by the GT2 RS that demonstrates the vehicle’s caliber, but also the consistency of performance in every lap. We’re particularly proud of the fact that this was achieved with two different cars and two different drivers, as it underscores the ability of the GT2 RS to reproduce the record over and over again.”

Nick Tandy, a Porsche factory driver, had to make a big adjustment from a prototype Porsche 919 Hybrid to the 700 horsepower 911 GT2 RS, fitted with standard N-spec Michelin Pilot Sport Cup 2 tires. Tandy flew to the ‘Ring directly from a six-hour race in Austin, Tex., handling the change effortlessly.

Professional test driver – and race car pilot – Lars Kern set the fastest final time. His resume is impressive. In addition to the Carrera Cup Australia, Kern regularly competes in the German VLN endurance racing championship on the Nürburgring and knows the Nordschleife like the back of his hand. The ultimate record lap began under ideal track conditions at 7:11 p.m. local time and ended 6:47.3 minutes later. The average speed on the 12.8-mile (20.6 kilometers) lap was 114.4 miles per hour.

At the heart of the most-powerful road-going, 911 is a twin-turbo flat-six that puts out 700 horsepower. The powerplant moves the two-seater – weighing 3,2 41 pounds – from 0 to 60 in 2.7 seconds which is honestly hypercar territory. The top track speed on the rear-wheel-drive Coupe is 211 mph, another hypercar benchmark. Interestingly, the new GT2 RS surpasses its predecessor, equipped with a 3.6-liter engine, with 80 horsepower and delivers up to 553 pounds-feet of torque.